Soaps.com: Were you always aware of coincidence in your life, even before that moment on the "DOOL" set with the business card that said "Expect a Miracle?"

Loring: I suppose I was, probably as much as any of us is. And probably my use of the word coincidence was that sort of frivolous meaning where we say, "Well that was a strange coincidence." We toss it off because we don't have a framework or an understanding of which to hold it. The card itself was the event, but the start of my interest in the subject actually happened two years later when someone was interviewing me and I told them the story about the card and how it was an amazing coincidence, and he told me "You know, coincidence is God's way of remaining anonymous." And you know how there are moments in time when someone says something to you and you immediately know you want to remember it? So I made him repeat it, and then I repeated it. "Coincidence is God's way ... of remaining anonymous." It was like a question mark for me and I wrote it down. And then I started using it. And every time I would tell the story about how we raised the $1 million for diabetes research, I would button it with, "Isn't that an amazing coincidence. And did you know, coincidence is God's way of remaining anonymous." And I felt very smart and cool saying that but I really didn't understand it. And it was only as the years unfolded over the next five or six years after that, that I started to see this continuum of synchronicity, of coinciding of what I needed, when I needed it. What I needed to know, what I needed to grow. And I started to see that there was really something to this, beside the supreme intelligence, the supreme love that is trying to lead us to what is best for us if we will listen with our intuition, which is the inner form of coincidence. And if we would watch what we are attracting on the outside. It is what we are attracting and it is what we are running from. Sometimes what we are running from has a great message for us. I have a friend of mine who years ago, every time she turned on the television it seemed to her that she would see some ad or somebody talking about something to do with breast cancer. And it would agitate her so badly she would turn the television off. She was running from it. And it turned out she had breast cancer, which her body knew. She didn't know in her mind, she didn't want to know in her mind. But her body knew and her body was sensing the messages. She finally saw the evidence was so strong that she went for an exam, and she did live through that. But there was this intuitive knowing in her body. There is a difference between what we think with our heads and what our body knows to be true. Sometimes we will meet somebody and we will think they are so nice. And depending on whether we listen to our inner knowing - there is a mechanism in us that lets us know when we are in danger and things aren't right if we learn how to listen. And when the relationship goes bad later, I ask people when they first met that person if they had any rumblings inside, any misgivings, any doubts. And they did but went ahead anyway. So there is a disconnect from knowing - we could call that God or intuition or Mother Nature trying to protect us. There are spiritual and scientific reasons that we know this exists, and that is the basis of it.

Soaps.com: It seems that is a very conscious way of living that might be scary for some people.

Loring: Once you come to consciousness, you realize how scary living unconsciously was. When you live unconsciously, there are aspects of your being and different wounds that are propelling you forward and you seem to have no control over them because you haven't brought them into the light of consciousness. You haven't realized them. You haven't addressed them. One therapist said it is like the hamburger in the closet. That hamburger has been in there for years and it stinks! And every time we get up it stinks and we get the Fabreze and we take an extra shower and spray ourselves with perfume and we keep trying to cover up the hamburger in the closet when if we would just open the door and see this ugly, stinking mess that is in there and take it and bring it out and put it aside. Get it out of there! And all of the sudden life doesn't stink anymore!

Soaps.com: It seems like a no-brainer when you put it that way.

Loring: Well it is a no-brainer once you do it. We have fear about so many issues. If you grew up in an alcoholic home or where there was any abuse you probably have some level of Post traumatic Stress that is still within you. That trauma is still there and if it hasn't been alleviated and healed ... just imagine if you had a great wound on your leg and you just wrapped a big Ace bandage around it and you let it ferment. You never gave it air or light or Neosporin or took an antibiotic. You never creates the conditions for healing. Your body and your psyche want to heal, your emotional being wants to be well. And when you think about what has happened to us and no one has comforted us it hurts so much. And it is only when we find the courage to look at these things that have been hurting us all these years, they no longer have as much power. There is something about sharing it, writing it down, having it process by a really skillful and compassionate professional or sometimes just a compassionate friend. If you were abused as a child, you know someone who was also. And if they have done their own healing work, if you share with them, they will hear this at a heart level that will be like salve for your wounds. Because somebody understands. Somebody is listening. We all know how much it helps when somebody pours comforting ideas on us. Coincidence and intuition will keep bringing them up. I quote my friend Shirley in the book who says God will keep bringing these things up like a bobber on a fishing line until we finally pay attention. And that is why coincidence is the supreme intelligence's way of making something tangible for us. Compassion is within us and is all around us. You don't have to believe in God. You don't have to believe in gravity. It still works.

Read part two of our Interview with Gloria Loring. Were you shocked by Victoria's return on "Revenge?" Let us know at Soap Opera Fan's Revenge recaps. 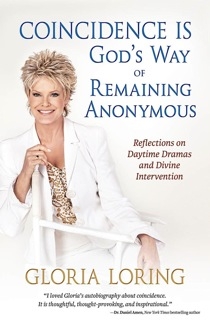 “Sometimes what we are running from has a great message for us.”

As Liz Chandler, Gloria Loring gained millions of Daytime fans who soon learned to love her for her many other talents too, whether it was singing the No. 1 hit “Friends and Lovers,” or co-composing TV hit theme songs for “The Facts Of Life” and “Diff’rent Strokes.”

Loring has also been committed to raising money for diabetes research after her son Brennan was diagnosed at age 4. In fact, it was a coincidence that happened on the “DOOL” set that not only propelled her to raise $1 million for the cause, but also put the seed in her head about her latest book, “Coincidence Is God’s Way Of Remaining Anonymous,” which hit the store shelves this week. Loring believes that while coincidence seems to come out of the blue, we all play a role in getting it into our lives. For her, coincidence came into play during her divorce from actor Alan Thicke (“Growing Pains”) and helped her heal from the trauma of long-forgotten childhood sexual abuse. It also brought upon her chance encounter with her new husband.

Loring spoke with Soaps.com about how letting go of hurt and pain can help us live a life in which we are more in control. Read more about how the book evolved from a thought to a philosophy.

Soaps.com: What was the process of how this book began until it hit the shelves this week?

Loring: What happened was, I had this story. My story. And I wrote those down and they got honed over the years, but then I wasn’t sure how to explain the subject of coincidence. So I did a lot of research and bought probably 15 books on coincidence. I started taking notes and I started doing some writing. And I put it one way, and then I did it another way and thought, no this is not right. And so I put it aside for a year or two but would pick it up again – there was something there. And by that time I had more experience and more understanding and I think it just took time for the subject and my own conviction to gather itself together so that now when I speak of this it is a subject as deep and as wide as I need it to be to speak of it with great commitment and understanding. It is not like, isn’t that a cool thing. I really know how this works. I don’t know all the whys, there is no way for us to know all the whys, but how it works, where it comes from and how we can use this for our own good.

Days of our Lives Video: The Right Decision

Days of our Lives Welcomes Back Eileen Davidson