DOOL Poll: Which Character Do You Prefer? 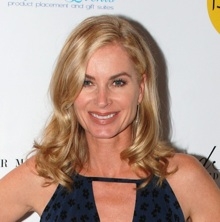 Eileen Davidson is returning to “Days of our Lives” on October 11 as Kristen Blake, who she portrayed from 1993 – 1998. Of course, she also played a few look-a-likes as well during that time.

Aside from Blake, who was in love with John Black (Drake Hogestyn), Davidson donned a bad wig and ugly teeth to portray Kristen’s eventual look-a-like Susan Banks, who impersonated her for a while and is EJ’s mother. Then there was Susan’s sister Sister Mary Moira Banks and brother Thomas Banks. Finally, Penelope Kent came on the scene, as another of Susan’s siblings, who was given up at birth and had a British accent.

Who was your favorite Davidson character on “DOOL?” Vote and comment below.

Keep up with your favorite former Daytime stars, like Tuc Watkins, who is in an online series, with Soaps.com's After the Soap Finales: Where Are The Now? For more twisted family dynamics, check out Soap Opera Fan's Revenge recaps.

Days of our Lives Video: Don't Even...