Days of our Lives Blog 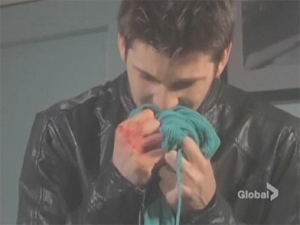 The show was all over the place this week. Not a lot happened but I did find myself missing EJill scenes. The biggest bit was broken-hearted Melanie leaving town.

Goodbye Melanie.
Chadsworth went off the deep-end after letting his paranoia about Nick get to him. It cost him Melanie and could have cost him his freedom. Sure he’s contrite but maybe only because Melanie dumped him. Her devastation was heart-breaking and her reaction to Gabi was understated – dignified even. I’m not sure I would have been as kind! Mel then said a poignant goodbye to Salem and family and ran away to England in an attempt to clear her head. There were many tears. Now Chad wants revenge on Gabi and maybe even Nick. Viewers are debating about whether or not Chad’s bipolar or if this is just the normal ‘DiMera craziness’. He’s always been a little ‘intense’ in the past and Casey Deidrick does well with it. Many of us have been waiting a long time to see Chad with a little more darkness. Is it sexier? Vote in our Are bad boys sexy? poll!

WilSon PDA:
Lucas reached for the smelling salts after finding his son kissing another dude – twice. I thought he was fine with Will being gay. I thought maybe he was just cringing at how embarrassingly cheesy Will was acting before the kiss, what with all the waggling of the eyebrows, and crooking of his finger in a ‘come here’ manner but nope. Lucas really isn’t okay with Will being gay. This was unexpected and a sad turn of events. I’m not sure how I feel about this. I’m not sure I fully understand what’s going on in Lucas’ head yet or if he even does.

Cheesiest line… William told Sami after five minutes of dating Sonny, “Love is in the…” What a dork! I hope that dialogue was a one off. WilSon’s the only couple aside from our vets. If my WilSon’s dialogue is embarrassing it’ll be the death of the couple for me. I guess Will comes by his dorkiness in relationships honestly and in a familial way.

One date does not a marriage make.
Safe’s date was painfully awkward. I could feel the unease and that they were both holding back feelings. It’d have been nice if they discussed something other than Rafe being Nicole’s so-called baby daddy. Sami made me proud for being supportive of Rafe and then for the umpteenth time this year she got to say her favourite line, “You’ll make a great dad.” That sort of talk is tremendously mind-numbing to watch when not on a date. The passionate kiss made up for that and got Sami’s juices flowing. As she was about to pressure Rafe for more than he can handle right now, EJ came sniffing around – literally, sniffing her hair and brushing his lips ever-so-close but never kissing her. It’s sexy but teasing gets old quickly. Sami needs a roll in the hay with someone before she decides on which knight will be hubby number six. Six?

Rafe should have explained to Sami the evening would be casual attire so she’d have stopped Allie from going crazy with the glue gun and glitter on her new hootchie dress. I don’t get it. She dresses classy during the day so why the trashy evening-wear?

Kettle, meet pot.
EJ told Sami, "If it's children first, job second, what does that make Rafe? A child or a job?" Good point but didn't EJ "quit" his mayoral position to "spend time with family?" All he has done so far is look for ways to discredit and blackmail Rafe!

Gack.
I really like Gabi and Nick's friendship but who’s to say he won’t turn it into something more sinister? Find out what the actor says about Nick, how Nick feels about Melanie, and Gabi and why Nick really didn’t press charges against Chad in Soaps.com’s Blake Berris interview.

Billie?
Billie thinks Sami needs a white knight. You know what? No, she doesn’t! Nobody does. Sami can take care of herself. We all can. She just needs someone to remind her of that. She needs a friend who can remind her of who she is. Whether she ends up with EJ (AKA Black Knight) or Rafe (AKA White Knight), neither needs to be her knight. Just a partner.

Nicole/Jenn/Daniel:
I just don't care enough about this storyline right now to comment.

Sami to Will: "Rafe was leading me down the garden path and then turned onto the highway." Under her breath I swore she kept going..."And backed up and headed west on the freeway, dumping me off by the side of the road as he kept on going, as if we were recreating the video game Grand Theft Auto."

Must read! Matt’s SOF Musings A taste: "Babs kept repeating that being in the SPD was a useless waste of time and no one, including Roman and Hope, would disagree with him."

Days of our Lives Video: Time Away...