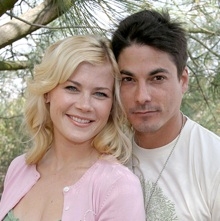 In 1997, after a one-night stand with Lucas, Sami became pregnant. However, she was in love with Austin and convinced him the baby was his after she slipped him the date rape drug and slept with him. She at first assumed the child was Austin’s but it was later revealed to be Lucas’ son. Unfortunately for Sami, Austin was in love with Sami’s sister Carrie, who became suspicious of her manipulative sibling.

Carrie discovered Sami’s baby Will was really Lucas’ son on September 2. The same day Sami was to marry Austin. After some help from a couple of other Salemites, Carrie got the proof she needed to expose Sami and did so in the church, as the couple was about to say “I do.” Carrie also revealed that Sami got her memory back, which she lost after a car accident involving a guilty Austin, but had been faking it. But that’s another issue.

Who helped Carrie get proof that Lucas, not Austin, was Will’s father? Vote and comment on the storyline below.

Take a look at who's returning to "Dallas" in Soaps.com's Primetime Dish. Refresh your memory with Soap Opera Fan's Revenge Season One Recap.

Days of our Lives Blog