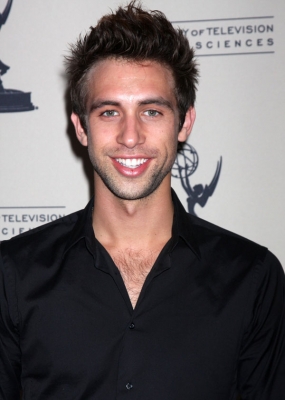 “He has to stay away from things that bring him too much pleasure.”

After Nick Fallon went to prison four years ago for murdering Trent Robbins (Roscoe Born), he has had plenty of time to think about who he is and what he has done. Actor Blake Berris sheds some light on who Nick really is now and how he has changed since the last time we have seen him in Salem.

Soaps.com: Welcome back! What has the response been from your fans about your return?

Soaps.com: Why don’t you tell us who you think Nick was four years ago, and who he is now after his time in prison.

Berris: Just as always, he does something differently than you would normally expect. Just when I think everyone thought he was basically a nice, kind of sensitive, together kind of dorky guy, he took a turn for the dark and ended up killing Melanie’s father. I think in the meantime while he was in prison, he was desperately trying to get rid of that dark obsession, that part of him that is prone to doing drugs and allowed him to spiral out of control. I think right now who we are seeing is a Nick who is aware of the fact and self conscious of the fact that he knows that there is a side of him that he can’t control. So that is difficult. I think that is very difficult for him and it is almost like he has to stay away from things that bring him too much pleasure. I love the character. He is interesting to me.

Berris: I guess to me, there is still a side of Melanie that … she is very infectious to him and I think that he really fell hard for her. Compounded with the drugs, he ended up basically manipulating her into running away with him after he killed her father and I think that there is some very strong feelings that he is trying to suppress for her. But also, I think his very rational, logical side – which I think Nick has a lot of going on in his brain as well – is saying that this girl is a victim and this girl needs to be treated with care and sensitivity and I basically should just stay the hell away from her. Because there is no good that can basically come of it.

Soaps.com: Nick claims he didn’t want to call the police and have Chad (Casey Deidrick) arrested for beating him because he was on parole. Was that Nick’s real motivation?

Berris: Oh, I think he is on thin ice. When you are on parole you can’t make a wrong move. I don’t think he wants anybody knowing that he was involved in a fight. Even though he didn’t fight back the he said, she said game starts and he is screwed.

Soaps.com: So you think most of what Nick has been through is due to the prescription drugs or was it something deeper?

Berris: I think it is something deeper. I think there is something very obsessive about him. He obviously became obsessed with taking the pills but I think he also clearly has an obsession with women, whoever. Whether it is Chelsea (Rachel Melvin) or Melanie or whomever, there is a side of him that falls really hard.

Soaps.com: We know there's a kiss between Gabi and Nick coming up. Would she fall into that category?

Berris: Yeah, I think she does as well. Yeah.

Soaps.com: Your contract was said to be for six-months to a year. If asked would you consider staying longer?

Berris: I guess we will just have to cross that bridge when we come to it.

Soaps.com: You seem to be pretty busy otherwise. Tell us about some of the other projects you have coming up.

Berris: One of the projects I am really excited about is a film called "Meth Head" that I did last year, which should have a screening for distributors coming up. We are crossing our fingers to get a distribution deal out of it so people can see it in theaters. In that film I play the second lead to the guy who gets addicted to meth. I am kind of the guy who gets him addicted to meth. And then he and I – the actor is Lukas Haas who is a really great actor. The two of us end up devolving into a life of drugs and a lot of stuff goes down. We start prostituting ourselves. It is an intense movie.

Soaps.com: And then that led to Crazy Bitches, right?

Berris: Yes, I am doing another film with Jane Clark who directed "Meth Head" called "Crazy Bitches" and we begin filming this year.

Like celebrity Q & A's? Read our interview with General Hospital's Lindsey Morgan. Or take a lighthearted look at life in Salem and the other soaps with Soap Opera Fan's Soap Opera Screen Captures.

Days of our Lives Video: Par For The...