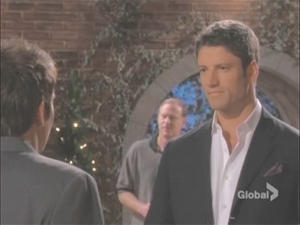 This week the focus was on obsessed Salemites. Chad’s obsessed with Nick, Nicole’s obsessed with Daniel and the fans are obsessed with who kicked whose ass in the EJafe (EJ and Rafe) fight. Once again there were numerous flashbacks, and repeated scenes from the previous episode.

Talk about art imitating life!
Roman let Bo and Hope know that SPD was handing out pay cuts due to budget restrictions. Hope chose the pay cut, because she enjoys working for beans and the headaches that go along with the job. She channeled Oprah and started helping Bo to follow his bliss. It makes sense that Bo isn’t into being a cop. He’s the worst cop in Salem and more of a rebel. Both seem blissfully ignorant about their finances. There was a moment that I swore I heard her mumble under her breath, “Screw the mortgage payments! Ciara can panhandle for University fees! KD for dinner it is!”

The kiss.
Rafe told Sami that their kiss was “stupid.” Sami looked surprised and disagreed. She doesn’t think feelings are stupid or smart. “They just are.” It sounded like a conversation between two fourth graders. Lucas tried again telling Sami what her problems were. There were a few variations but what it boils down to is that she doesn’t think proactively about how acting on certain feelings could get her into trouble. True, Sami should explore her feelings for EJ and for Rafe before she jumps into any relationship but we know Sami and that’s not what she’ll do. She’ll jump in heart first and ignore her own daily vow: “I just want to focus on my kids and my career.” Yes. We know. We heard. Plus, it’s in the Salem Gazette and on Salem FM radio. But it’s all talk and actions speak louder. Girl doesn’t know what she wants or who and sadly, when she talks to Uncle Bo about it, he flies off the handle at her. It was shocking to see and maybe needed to be said but I’m not sure it sunk in. She needs Marlena’s input.

Snow White and the Cheap Hateful Tramp:
Daniel finally told Nicole it’s time to move on but in her head she only heard, “La la la la la.” It was painful to watch her carry on the obsession. She should take Sami’s advice and focus on her kid and a career. And what’s going on with Daniel? I can never tell. We know he has feelings for Jennifer still, thanks to Maggie but is he holding back the feelings out of respect for Jenn and Jack’s death? Is that why he keeps running away from spending more than five minutes with her? Nicole’s Friday scenes were very strange. Who talks to themselves that much? And really? Photoshopping Rafe in bed with her? Crazy but Sami will buy it and talk to EJ about it and that’s what Nicole is hoping for.

Momma bear to the rescue!
Wait a second. Are Sonny and William cousins? Victor is Sonny’s uncle and Bo’s Victor’s son and Sami’s uncle and Sami's Will's mother so they should be... Anyway, Will really does have low self-esteem. Scary low. I’d love to see his confident side win out before Sonny had to go searching for him to remind him it doesn't matter what Adrienne thinks. The scene was sweet as was the kiss but I could have done without the stupid filler scenes earlier in the week with Sami showing Will his colouring book from 1980!

Oh dear.
Caroline’s memory is slipping. She forgot that she received a shipment so it looks like we are in for an Alzheimer’s storyline.

A little something for Brady?
Instead of having Brady hook-up with Kate, which could prove interesting for a while, they’ve got him hanging out with Snow White. It’s a nice friendship they’re building but I wonder what it’d be like to see him and Kate have a little fun?

The scarf.
Chad became a true DiMera on Thursday after giving Melanie a scarf. Soon he’ll be sniffing it on some street corner just like his brother EJ. He stepped things up when he beat up poor Nick. Would Stefano be proud?

kenerly1, a poster on our forums says her husband was watching with her during Chad’s paranoia over watching Gabi and Nick at the pub. Her hubby said, "I don't think Chad is trying to protect Melanie from Nick, I think he is into Gabby." Could it be? Vote on how you think Chad really feels about Gabi. I'm actually enjoying Gabi and Nick's scenes together. They might be good for one another.

Days of our Lives Video: Hawaii Or...