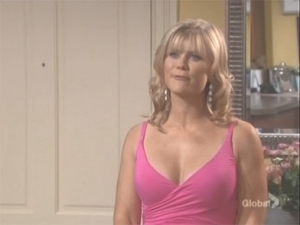 Replace them with Jack. (NBC)

With too much of the week centered on the ancient country bumpkin, repetitive dialogue and a dreadful proposal, there was little to enjoy.

Stale-a:
Why do we see so much of Abe and Kayla (Stayla) who have no chemistry to speak of when we could be seeing Abe get to know Maxine, who can balance Abe’s dullness? He’s jobless, so the show could find him a job at the hospital where we could test his chemistry with Maxine. As for Kayla and the country bumpkin, neither does much for me so I wouldn’t mind if they were gone and replaced with Jack.

If you can’t get a man to love you, force it!
Nicole’s lack of vulnerability lately is making it difficult to root for her or her and Daniel. He’s been pulling away from her, which has only made her a woman obsessed. And what’s with her naming her kid Hernandez? That’s unnecessary.

Salem’s last virgin…
Why has Abby been so uptight about sex and being a virgin? Could it be because she’s the only one left in Salem? The pressure! Or could Jack and Jenn not have had the birds and bees talk with her and now she’s frightened of what’s to come? Could she have been attacked in the past and having a difficult time with those memories? Is she having Austin flashbacks? Is Jack’s death affecting her? Or… maybe she’s just a late-bloomer who worries she won’t measure up for Cameron. Vote on why Abby is uptight.

Knee-jerk reaction.
Are we to understand that Chad’s reaction to Nick staying in Salem was to protect Melanie by proposing marriage? I’m not sure how marriage is supposed to protect a young lass in the 21st century. What century is he living in? Wherever it is, his stinky proposal came from a desperate place and Melanie should have said, “No.” I’m sure she wants to say “No,” and I’ll wage money that the wedding doesn’t happen. Maybe that’s what pushes Chad over the edge into becoming a ‘real’ DiMera. He’s well on his way already. It was actually good to her Gabi stand up for herself and remind him of what he’ll lose if Melanie learns the truth.

Not that I think Gabi’s a friend to Melanie. First she allows Andrew to kidnap Mel and now she’s buddy buddy with Nick? And how is it possible that Gabi didn’t know who Nick was when his face is in all the papers?!

You know this storyline is coming to a close (and thank goodness) because Melanie has twice in one episode talked about wanting an “honest relationship.” She’s never mentioned this in the past!

Did EJ resign or was he fired?
Which one is it? And Hope what... drove him to the most public setting in the town or followed him there in her car so she could what? Watch him give his resignation while the governor simultaneously gave him the heave-ho? We didn't have to see this scene and though it was difficult to tell who did the dumping, it's a moot point by now. The story was a means to an end.

Do you think Abe will become mayor by default?

"No shooting, no cloning, no kidnapping, lying..."
I’m all for the characters acknowledging who they really are and poking fun at themselves but Sami’s conditions didn’t make me laugh. Maybe it was one of those ‘you had to be there’ moments, or ‘you can’t laugh unless you were involved’. Maybe EJ should have added ‘no cheating’ to the clause...

Sydnapping!
Rafe was on to Sami. He could tell she "wasn’t into EJ" because she was going on her date in her bubblegum pink hoochie clubbin' dress and her mismatched ‘ginormous’ purse. She told him the Sydnapping was no longer relevant. I guess there’s a statute of limitations on kidnapping. Two years and all is forgiven! Speaking of all being forgiven, that passionate kiss Sami got shows Rafe’s gotten over Ejami grief-sex. This feels like it’s coming out of nowhere and is moving too fast. Sami’s head must be spinning.

We can’t help who we fall for!
Adrienne has valid concerns that her son’s falling for someone with a lot of baggage, but hopefully she won’t let this come between her good relationship with Sonny. There is nothing she can do about him falling for William just as there’s nothing he can do about it. I do understand her concern and after all, Brian’s sure got a lot going for him.

Puzzling...The only explanation I can think of that Will would still be flashing to Gabi-sex is that the show is setting things up for a baby storyline. Otherwise, I fail to see how Gabi-sex would screw things up with Sonny. Even if Sonny found out, who cares? It's in the past.

Sami to EJ: "Who are you and what have you done with EJ DiMera?"

Will to Sami: "Who are you and what have you done with my mother?"

If I never heard any line start with "Who are you and what did you do..." it’ll be too soon. Matt thinks, "It's their way of reminding us that any of them could be clones." Good point.

Sami to Will, "My family has always been my first priority." Er...in what universe?

Take a look at Matt’s SOF Musings. A taste: "Considering how much of this feels like it was recycled from the weakest parts of her story with Philip, they were right to worry."

Dustin’s back blogging! Dustin’s thoughts on Days. Dustin says, "Hey why don't we just bring Brandon back at this point to make this storyline even more redundant!"

Days of our Lives Video: What's...