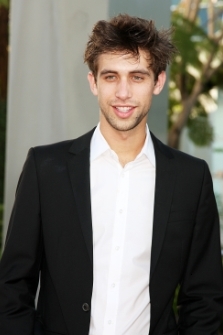 A different side of Berris.

Blake Berris (Nick) is a busy man. The Daytime Emmy nominated actor just made his way back to Salem but is already preparing for more projects. Berris has been cast in the independent film, “Crazy Bitches.” The black comedy takes viewers through a weekend of secluded boozing and babbling as seven women and a gay man are slowly killed off by a serial killer. The film co-stars Thea Gill (“Queer As Folk”), Mary Jane Wells (“Elena Undone”), Jill Bennett and Cathy DeBuono (“We Have To Stop Now”). Berris will be playing Gareth Jones, a randy ranch guard looking for a mystical virgin. “Crazy Bitches” is written and directed by Jane Clark. She previously worked with Berris on “Meth Head.”

The film is currently seeking financing. A Kickstarter campaign has been launched to fund the production. A portion of the location fees the film will pay will go to the Great Spirits Ranch, a refuge for abandoned animals and animals destined to be destroyed. To learn more on how you can donate, please visit the Crazy Bitches Kickstarter Page.

Find out how Martin might lose an old friend on “Touched” by reading our Primetime Television Spoilers. And to fantasize about what might have been, take a look at our Days of our Lives Fan Fiction.

Days of our Lives Video: All To...