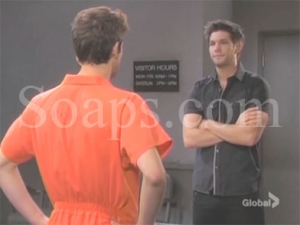 This week, I’m happy to have Soaps.com readers weighing in on the show with me. To start with, Days Dreamer says, “Right after the Olympics I thought it was getting better, but then they dropped the ball shifted gears went into a different direction/storyline. This seems to be a pattern. They start to get a little momentum, and then they lose it.” Point on. St8tButEqual has another point of view and adds, “The interactions with the characters are far better than it was and it’s not as compartmentalized.” I couldn’t agree more. Much like last week, I saw things the same, and much like last week, saw the dialogue save an otherwise dull four days in Salem.

It’s about time!
Lucas and EJ’s discussion was long overdue. These two have never said more than a few words to each other, yet they’ve Samanther in common so it’s only right that they get some things off their chest. Lucas poking fun at himself and EJ for being idiots was surprising and funny. He even brought up the forced sex. It’s become somewhat of a taboo subject around forums because of all of the bickering that usually ensues when it’s brought up but it’s important to remember it at such a key time in this story.

Sami and EJ had an interesting discussion that didn’t revolve around the usual delusions about their parenting abilities which was a breath of fresh air. Sami opened up about her suspicions about Nicole’s baby being EJ’s kid just as EJ decided that Rafe must be the baby daddy. Very convoluted. I like it. If anyone can get to the bottom of this it’s Sami, which is why I was surprised she dropped it. You know Sami. She’s like a dog with a bone!

Friday Sami accused Rafe of becoming more like her. That wasn’t lost on me. I’ve been calling Rafe a Brady for some time.

Ship sailed?
Many fans are saying Nick’s ship sailed four years ago and they’re not invested in this storyline. Flightygirl says, “The Nick thing was drawn out too long.” I agree which begs the question, has Nick’s ship sailed? Did John and Marlena’s too after being gone four years? Their return fell flat and frankly, Marlena’s much more enjoyable without John around. What about other ships sailing? The recast of Eric is returning to Salem as a priest of all things, which doesn’t interest me whatsoever, even though my vague recollections of him are good ones. We have Kristen returning after she left in 1998 and I’m hoping she can give the story the shot in the arm that it desperately needs. I also wouldn’t mind seeing Doc Baker return, which would fit into Nicole’s storyline but know I’m a minority on that one! What do you think? How late is ‘too late’ to bring back characters? Vote.

My biggest beef about this storyline? The guy was in jail for stalking, kidnapping and murder and got out after a mere four years. Four.

Cameron & Abby:
Abigail turned on the heat only to pull away from Cameron. It looked as though she was trying to use sex to take her mind off of her troubles but she’s too inexperienced to appreciate how that works anyway. The first time shouldn’t be on Alice’s hard sofa with people coming and going anyway... And can we give Cameron a father already? He needs something to tie him to Salem other than Abigail. He doesn’t even see Theo or Abe. This reminds me of Rafe’s introduction to Salem, only his was worse and people are still miffed that he has no real background, years later. Cameron, Rafe and Daniel share this gap that can still be filled with some back story.

Where’s Bope?
Knowing Bo is leaving soon, many fans are complaining about the lack of airtime, which can only mean there will be some heavy concentration on them just before he leaves the show. Instead, fans are craving balance as pointed out by LuvBoHope, "The stage is no longer shared!" True. It’s all about Sami and her merry men.

Nicole/Jenn/Daniel triangle recycled.
Again? Nobody enjoyed this the first time around. Nicole's once again going to connive to "keep" Daniel away from Jenn...bla bla bla.

Chad DiMera:
Chad’s becoming very bitter, channeling Stefano and his adoptive father, DA Woods. He told Gabi, "I’m a DiMera. I’m going to hold this over you forever." Gabi will have to ask herself soon if it’s even worth him lording her mistake over her. Not that I want Melanie to find out. She’s been through enough.

Many fans are asking why the show didn’t just recast Melanie, since there is a lot of story left to be told what with Nick’s return.

More from our regular posters!

Doc04 says, "They have pushed the vets aside and are trying to shove these new characters down our throats and I just don't care for any of these stories."

ImissTony says, "Don't give a rat's pink butt about EJ, Stefano (at this point in time), Nick, Cameron/Abby, Chad, Gabi, Will/Sonny, Kayla, and especially Hope." Isn’t this scary? This is something I’ve seen on both Soaps.com and SoapOperaFan.com. Many fans agree that there are fewer characters to root for and more that they’re fast forwarding through.

Bricole says, "Do you think the writers realize that they are missing a heroine? You know, the super sweet girl that everyone loves? 'Vampire Diaries' has Elena, 'Dallas' has Elena, but 'Days' is missing an Elena. Sami has too much baggage to fill this role and super sweet is definitely not her." Seriously, this would probably pick things up if there was an ‘Elena’ on "Days" to root for. We’d at least have the good girl vs bad girl. As long as they don’t take it as far as "Bold and the Beautiful" has!

Read the DOOL fan thread where fans continue to pour their hearts out.

Take a look at Matt’s SOF Musings A taste: "...most of the week's episodes were spliced together with so many flashbacks and fantasies they felt like Oliver Stone's attempts to edit films like they were acid trips."

Find out where we spotted Michelle Obama and the Kennedy family this week by Star Gazing.

Days of our Lives Video: Granted...