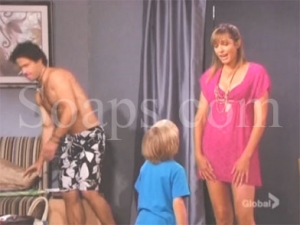 This week, Nick ‘Felon’ returned and some of the focus was on reminding fans of who he is and why he’s in prison, and deciding whether or not he should get out. The pace was fast, Nick seemed very contrite. We’ve seen a surprising amount of characters on canvas and in equally surprising interactions with other characters they usually never see. There’s more going on in the hour than we’re used to and the writers still seem to be poking fun at their own writing, which in itself is pretty funny.

Dating the ex:
Nicole and Chloe were BFFs for a long time. It’s tough to know if Nicole contacted Chloe to ask permission to date her ex-husband, knowing that Nicole’s more interested in men than cultivating and keeping friendships with women. Nicole has been having new fantasies which is never good and seems to further her own delusions. It’s obvious to me by the way Shawn Christian is playing things that Daniel’s not remotely close to asking her to move in with him and as far as I’m concerned, according to the way he’s been acting, they’re basically through, though she hasn’t gotten the memo yet. Already, we’re seeing Daniel and Jennifer share a bond over lost spouses. I want more for Nic Nic than another triangle.

Nick’s up for parole.
Suddenly Melanie’s talking about having nightmares about Nick as she did in the past – first we’ve heard. Maybe if Melanie really did have nightmares in the past about him I could feel more about this story but I forget all of the bad stuff Nick did. To me, Nick’s still a good person who only went rogue because of prescription drugs. Just like Hope!

Julie’s playing ‘bad cop’ to Maggie and Hope’s ‘good cop’ which has been upsetting to many fans. Julie has always been outspoken but now we’re seeing a rather insensitive side to her, while Maggie and Hope show their sympathetic side to both Nick and Melanie. Feels a bit forced.

I’ve always liked Nick but I can’t help but wonder where he’ll fit in once out of prison. Is he here just to tie in with Melanie’s exit?

Chad?
I barely recognize Chad these days what with the threats to Gabi, the badgering, whining and accusing Melanie of shutting him out because she didn’t tell him about Nick. I gather they’re gearing up to break Chelanie up before she takes off. Just guessing. They’ve not known each other all that long so it’s no surprise she never mentioned Nick. It’s not something that comes up in everyday conversation. Since we’re not seeing enough of what’s really going on with them, it makes it difficult to care either way about them or this storyline.

Confusing.
Sami always wants what she can’t have? This is what Lucas believes but I’ve never seen her that way. She can have EJ or Rafe if she wanted them. Lucas too. She has proven that time and time again. Does Lucas even know her?

Sami, "My kids are the most important thing in the world to me and I have to do what’s best for them."

EJ, "Samantha I know that and you do - the same way I do. I think that goes without saying."

Sami, "Yes it does go without saying."

Hysterical! They’re both deluded. Neither has ever shown that their children come first! I love it. The writers must be killing themselves writing this. And...just like always, we had the mandatory shot of EJ with the kids and Sami looking on lovingly, yet I can scarcely recall when they’ve ever done what Sonny and Brian did in Thursday’s show, which was to discuss a mutual interest other than how they’re both "wonderful parents." Really? If the show expects more people to root for this couple other than wanting to see them naked, they're going to have to give us scenes of the couple getting to know each other (for once) and though I think the kids are adorable, this week I finally wondered if it was time to SORAS them or send them to boarding school!

Neither Caroline, Roman nor Will think EJ is good for Sami. Does Sami know what’s best for Sami or should she listen to her family? Vote!

Oh please...
Will tells Abigail about unintentionally coming out in public. "You saw the papers and the gossip columns." Gossip columns? What the hell does Salem need gossip columns for?! As Matt pointed out, "There are only like 50 people in Salem." Besides that, Will’s not a celebrity, so why would a gossip column waste time on him! Funny!

Male bonding.
Brady and Rafe discussed Madi’s death. Perfect opportunity for Rafe to bring up losing his ex-fiancée years ago to death so they could bond over a shared experience. Instead, they talked about losing Carrie even though losing her was not remotely like losing someone to death.

Questions of the week:
Which Stefano gave Sami the job as head of CW? The real one or the doppelganger? If it was the fake Stefano, will the real one take it away from her? Secondly, Stefano finally got a taste of his own medicine yet nobody has mentioned this. One would think at least John would have made some joke about it or that Sami would have taken this opportunity to slam Stefano - and EJ, considering he was in on the RoboRafe creation. Boggles the mind how the writers 'forget'. It'd make for 'real' writing if Sami needed time to get over the RoboRafe stuff before dating EJ. It'd create real conflict. We need some way to get over what EJ has done a mere few months ago and this could put all of their horrible issues behind them so they can start fresh. Unless of course they're pairing her with Rafe again.

Nicole, "I feel less used by you than any other man."

Nicole, "I never knew safe could be sexy."

Kate to John, "Shouldn't you be out fighting evil?"

Hope to Nick, "If you do anything to sabotage yourself... I'm going to kill you!"

Victor to Maggie, "If it was April, I'd think this was a joke."

Nicole, "Being contrite works up an appetite."

Take a look at Matt’s SOF Musings A taste: "The news came down that Nick Fallon was facing early parole. Cousin Marvin was furious that he didn't receive a letter from the parole board. He still hasn't forgiven Nick for killing off one of the only remotely interesting new characters introduced in the past decade."

Find out where we spotted Rihanna and Lady Gaga this week by Star Gazing. Find out which celebs had babies this week in the Reality TV Rush.

Days of our Lives Video: Sami...