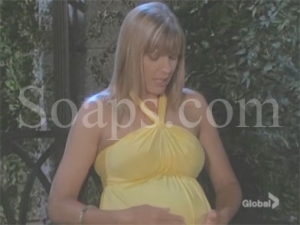 Sonny turned 'this' down? Tsk. (Soaps.com)

It’s the week after the “Daysaster.” Jenn’s acting very reserved, there was no funeral or memorial service for Jack, and even if there was, Will missed out in order to have awkward grief sex with Gabi. Tad bullied Sonny and Will, Prince Harry bared his bum, and Sami gets yet another suitor…

Big news this week other than Stefano’s return is Lisa Rinna’s leaving the show and Nadia Bjorlin’s return as Chloe. The big question: Will they finally bring back PhillyK?

Gabi was caught.
Chad found out about Gabi’s transgressions pretty fast. He found her to be “the most selfish, deluded and dangerous person” he has met, and clarified that he should know considering he’s a DiMera.” Either he is claiming his birthright for Gabi’s sake just to put a scare into her or we’re seeing a glimmer of a possible dark side. Incidentally, he hasn’t even been around the DiMera’s and their minions to know what it means to be a DiMera. And if she’s the most selfish and deluded person he has met, he needs to get out in Salem more! Does anyone believe that Gabi has finally stopped deluding herself? Vote!

Sami and her merry men:
Lucas gave up on Sami without a fight. Understandable but nevertheless it’s a letdown that he hasn’t put up a fight for her. I’m not sure how to get behind a fight anyway considering she’s been cheating on him with EJ and doesn’t even seem broken up about it. Safe got some closure at the safe house which wasn’t really closure at all and points toward the two having unfinished business with one another. Meanwhile, EJ is eager to get into her pants and who knows what else but is Samanther ready for him or anyone right now? Did that flub mean she’s still got a torch for Rafe?

Whining.
Hasn’t Sami ever heard of the self-fulfilling prophecy? “Everything I touch I ruin,” she said and she’s not going to change. I felt for her for about five seconds until her attitude annoyed me. It’s no wonder “delicious” – as per Marlena – (Does he taste like maple syrup or something?!) Will can be such a whiner at times. He comes by it naturally from both Lucas and Sami. He cried to Gabi, “Everything I do is half-assed.” Oy! We’re again seeing many parallels in the mother and son relationship. Even with the grief sex between Will and Gabi. I doubt they used a condom which begs the question, “Will history repeat itself?” Will Gabi get pregnant, drug Chad, fake sex with him and pawn Will’s kid off as his? I shudder at the thought of reliving that Sami/Austin/Carrie story again.

’King’ of the gays or queen?
My poor Sonny. It was rough this week seeing Tad’s bigotry and fear unleashed on Wilson. Many fans wished Tad would leave Salem but we need this conflict, which happens in reality, in order to further the story and show depth in all characters involved. It was a crying shame that Sonny backed down from having a chance to take Brian into the back room to show him his coffee beans. It's a little boring and unrealistic that none of our gay characters are having sex with each other. I wouldn't mind seeing some Bronny for a while. I love Wilson but Will is not exactly in a place where he’s ready for anything monogamous with Sonny or anyone else so it'd make for a more interesting storyline and realistic, if Sonny lived a little until Will learns more about who he is. And for goodness sake, can Will lose himself in Neil instead of Gabi next time?

Power-hungry drama queen.
Ian shined in his scenes with Stefano and EJ, which is a shame considering he’s gone. He had a lot of potential to be a good villain. He was amusing, hateful and certifiable. What was with the creepy Hannibal Lecter mask he had on Stefano? And is he really Yvette’s son and a DiMera? He didn't have enough money or power so decided to steal his ... half-brother's? I didn’t blame him for laughing at Stefano and EJ. I laughed along with him. Neither did duplicate DNA tests and everyone automatically assumed Alice wrote that note. One issue that I brought up last week that still wasn’t addressed is that Chad’s a DiMera and wasn’t sabotaged. Why? This story is pretty convoluted which makes me wonder why Susan hung up on Hope that day she called to discuss Stefano going to Alice Horton after Elvis was well. What was that about? And does this mean John and Hope are really not married? Was their letter a fake, too? Lastly, didn’t Stefano receive two letters from the safe deposit box? I recall him reading one and laughing it off before the other sent him over the edge. What was in the first letter?

It occurs to me that Lexi died thinking EJ wasn’t her biological brother and that her father was murdered. Ouch.

Significance of the jade plant?
I’m assuming Jack sent the jade plant to Jenn considering we still haven’t seen a body. For those who didn’t get the reference to the jade plant, watch this old clip:

Rafe to EJ, "Another double. Can't you be a little more original?"

EJ, "If I hadn't fled jurisdiction, you Muppets would have charged me with murder."

Nicole to Daniel about the phoenix rising, "I thought that cat used up all his nine lives."

Ian to EJ, "You sound like your father. Your non-lamented father. Just like him. Big bark with a tiny little bite."

Kate to Chad, "The phoenix has risen again."

Take a look at Matt’s SOF Musings. A teaser: "Ian proceeded to offer a detailed critique of how stupid recent plots had been and how stupid EJ and Stefano are. He'd been pulling a DiMera style plot on them for months and they barely noticed he'd been stealing their old scripts."

Find out early who the new Live with Kelly! co-host is in our newest Celebrity Gossip.