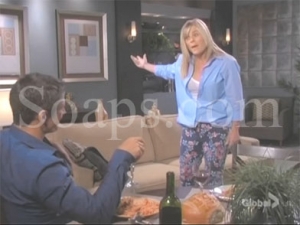 Fans made it through two weeks without “Days of our Lives,” after a pretty big cliffhanger. It was a rough week for most Salemites and some fans. While Sonny and countless others were MIA and hopefully doing fine, Jack and Madison died from injuries sustained in the explosions. Many fans were angered by Jack’s death but if nobody died it wouldn’t have made much of an impact story-wise. I’ll miss fun-loving Jack, but since I haven’t seen a body yet I’m going to pretend he’s off chasing another story. Here’s what stood out for me this week…

Sami’s jeans:
Lucas got the crummy end of the stick while his girlfriend followed her ex to one of Stefano’s many tasteful safe houses we’ve never heard of in order to help “clear his name for their children.” She left her children in Will’s care which isn’t going to win her the best mother award once again with fans but at least she’s checking up on them by using Facebook. Just when we thought we were beyond that script, Sami broke down and once again told EJ what a ‘wonderful father’ he is. Surely these two have more to say to one another than this? EJ saw Samanther in those 80s flowery jeans and thought she looked simply smashing and he started poaching on Lucas’ territory again. She didn’t mind. He took off to follow up on a tip and someone knocked him out. While Sami was forced to change into the little black dress, thank goodness, Rafe just happened to be hiding in the apartment with her, while some other dude’s trying to get in!

Best line: Sami to EJ: “I’m just lucky these jeans have come back in again.” Maybe in some alternate universe they have. EJ really must love her because he didn’t even bat an eyelash when she came out of the bedroom with those on and we know how he loves to bat his eyelashes!

Elevate her feet.
Daniel and Bo spent hours removing debris so they could get to a trapped Nicole in the ballroom but when they finally made their way to her, she was gone. I have no idea how this happened since she was pinned under the rubble. They found her wandering the square in shock. Daniel told Bo they needed to get her feet elevated. I’m still waiting for them to elevate her feet.

Oddity: Bo dropping in on Nic Nic in the hospital. I liked the scene. It was so out of the blue. Is this some turning point for how Nicole is received from Salemites?

It was great to see both Daniel and Nicole having epiphanies about themselves and each other. I especially enjoyed seeing Maxine and Father Matt in hospital scenes.

Little hero:
SPD should hire little Theo who has been a better detective than the whole department. Many fans spent the week wondering where the fire department was. I gather there was a shortage of delicious firemen to save Jack’s life. Jack got the shaft and the shaft got Jack! Too soon? Too lame? I’ll place the blame on Cameron for Jack’s death. There was no reason Jack couldn’t have slid between the doors before the ropes broke. Cameron was too busy coddling Abigail who was clearly just fine, instead of saving one last person. I had wondered why they didn’t rush to the ground floor to find Jack. Roman told them they could get hurt if they did and as we know, Roman’s always right...

Vote in my poll. How do you feel about Days killing Jack off?

One fan remembered that on an episode of "Friends," when Joey Tribbiani landed his first major role as Dr. Drake Ramoray on "Days of our Lives," only to have him be killed off in an elevator shaft.

Ian’s big reveals:
Great acting from Ian Buchanan and Lauren Koslow. I confess I wanted John to punch Ian in the face while he cradled Madison’s lifeless body and railed at John about Brady being strung out in some alley instead of at his fiancee’s side. It turns out Ian loved Madison and was using Kate to get to Stefano. Apparently he didn’t love her enough. And poor Brady didn’t even get to say goodbye to his bride. He was too busy saving his BFF’s life.

Best scenes of the week were between Kate and Ian. Kate found sex with Ian to be, "The worst five minutes of my life." He told her she should be on her knees grateful that he killed Stefano. Kate’s jaw dropped and he offered her scotch for the shock! Then he threatened her with a broken wine bottle! Shocking, horrible and absolutely hilarious! What a scene. I wished Ian wasn’t leaving after watching that. And considering Soaps.com just learned Joe Mascolo returns August 22, I can only imagine that Ian’s holding Stefano somewhere. It took a long time to get to a point where we finally learn what the vision for Ian is. He set EJ up, and ‘killed’ Stefano all because he loves Madison and wanted to take over DiMera Enterprises. But why didn’t he try to sabotage Chad in some way? He knew Chad was another heir of the DiMera fortune since Lexi was gone.

Miss "PLL?" Read our Pretty Little Liars recaps each week and make sure you read Soaps.com's interview with Freddie Smith, AKA Sonny.