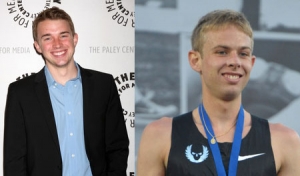 Not exactly separated at birth but they do look similar!

The Summer Games has thousands of professional athletes participating in various sporting competitions in London, England. Namely, the silver medalist, Galen Rupp, who competed for the University of Oregon and has been competing for USA for cross-country and track and field in the Olympics. Since “Days of our Lives” has been on hiatus for the duration of the Olympics, you may be watching and rooting for your country while counting the days until “Days” returns. If you have been following track and field, you may have spotted what a poster on Soap Opera Fan Blog noticed…

Maryl says, “I see a resemblance between our Will and Galen Rupp (silver medal winner for 10,000 meter race in the Olympics – especially when he is smiling). Or maybe I just miss ‘Days’ so much that I’m beginning to imagine things? Ha!”

We see it! Chandler Massey, AKA William Horton, looks similar to Galen Rupp.

Take a look at the side-by-side and vote. Do you see the similarities?

Remember, there are only a few more days left of the Olympics! “DOOL” is back airing new episodes Monday August 13.

Beth has a new dishy Celebrity Gossip article up. You’ll want to find out what Randy Travis and Justin Bieber did this week.

Get your soapy drama fix for all of the UK and Australian soaps.