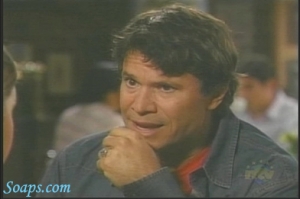 Trent was back and was glorious! (Soaps.com)

I’ve been seeing a few threads in the Days message board popping up comparing Sami and Nicole, instead of Lumi vs Ejami. While it’s nice to see the war over between the two camps, I fear we’re in for another one. I’m seeing a lot of people asking why others don’t feel a certain way or understand their point of view. I figured that I’d interject a few facts that I’ve seen over the past few weeks. Also remind people that everyone has their own perception when it comes to… anything and everything!

Two peas: Nicole and Sami are a lot alike. As John Black used to say, “That is a fact.” Both are caring, nasty, sweet, manipulative, loving, whiny, kind and rude.

If the words are never spoken, we can’t call it love: Sami has never once told EJ that she loved him. I’m not saying she does or doesn’t love him. At this point, we assume she either cares for him or loves him. EJ seems to have given up hope on getting together with her. We recall his rant to Stefano, telling him that he isn’t in love with her, was infatuated with her. The Ejami fans may argue that he was just saving face, but others will argue that if he said he doesn’t love her, he doesn’t. Still, he’s drawn to her. I mean, she is the mother of his kid and why wouldn’t he still care for her? You can’t turn feelings off, but you can save yourself from heartache, which is what I think he is doing. So back to Sami. Why doesn’t she tell him her feelings, whatever they are? Either she simply cares a lot about him, or loves him and is afraid he’ll hurt her, or she cares for him or loves him, but is afraid he no longer loves her. Perhaps she thinks the competition with Nicole is just too steep. It’s called self-preservation, folks. Kate’s usually the one who displays this. For anyone, if the timing isn’t right, the situation is not right, the man isn’t absolutely perfect for you, but there is still love, this doesn’t necessarily mean you should be together or that you will want to be together. Perhaps she knows this. Perhaps love is not enough. Doesn’t seem to me as though it is. I haven’t seen any reason why these two should be together for a while. We have no way of knowing if they’re over, and we still think there is a chance. At the moment, Nicole and EJ are a couple. They’ll get plenty of time together when Sami’s holed up in the safe house and Ali gone on maternity leave. Sami going into the witness protection program had me crying. Her acting was spot on and I felt horrible when Roman told her she couldn’t bring any photo albums with her or anything that would tie her to Salem.
This week, EJ told Nicole that his future was with her. She’s willing to forge a relationship when Sami isn’t, so good for him for moving on. Past aside, doesn’t he deserve to be happy as well? Course, he is already starting off on the wrong foot with the lie about going to the office when he really went to the cabin. Tsk tsk! Will Nicole carry to term? There was a cozy scene between EJ and Daniel, where Daniel brought up the word ‘miscarriage’ to EJ, and let him know why a woman would miscarry. Made me wonder if she will.

Lumi – I am remembering how these two used to scheme together during the Austin/Carrie times, more and more. It’s fun to see this again! I’m not sure if I’d want to see them together or not, but I have to put it out there. Old feelings could resurface. And Chloe wouldn’t like that – this week. Suddenly, Chloe got interesting and seems to really care about Lucas. The writers really need to stop re-writing everyone every few weeks. I’m as confused as ever. Do we really know our characters anymore? I like that Chloe has this knowledge of Sami’s pregnancy, over Sami and can tell Nicole. Will she?

These two have good chemistry. Know what I mean? They have good banter. I noticed that with EJ and Philip in the Film Noir episodes as well. I think we’re in for more of a storyline there, otherwise, I’m not sure why the writers would put that in… Unless they just wanted us to fawn over Daniel’s body. That’s understandable. Shouldn’t Philly have had swim trunks on, too? Never heard of a male catfight. Dogfight? Ok I won’t go there. *wink*

More on Daniel… and Kate and Granddaughter!

Daniel tried to get friendly with Chelsea by asking her for coffee, but she gave him a chilly reception and lied that she was meeting somebody else. Nick. She asked him for a friendly date and he accepted, but soon ditched her for Melanie. What’s that saying? We always want what we cannot have? Is she going to keep after him? We’ll see. This week, you’re going to find out that ***SPOILER ALERT*** Kate and Daniel will face the aftermath of their wanton ways, when granddaughter Chelsea finds out the two are still doing the nasty. Then, everything is all turned about, when Kate’s bad news shakes Chelsea. You’ll have to tune in to see the rest… or read my spoilers!

Stephanie and Max: While I used to like their chemistry, I see none as of late. I see the writers writing Stephanie into a whining mess, like they did to Sami, and Nicole. They want to destroy all female characters until they're all blubbering messes, apparently. Still, I've decided to stop bashing these two and go toward a more objective voice. What a tricky situation these two were in this week. Max finally decided to stop keeping secrets, as Stephanie's been wanting, but this time, the secret of what happened between Trent and Melanie the night of his murder was too much of a secret for her to keep and she spilled to Bo and Hope. She did the right thing, by going to the cops, but did the wrong thing by making a promise she knew she couldn't keep. It cost her when Max dumped her. Max can't forgive her now and no longer trusts her, but are they really history? Once Max realizes who Melanie really is, I think he'll realize what he gave up… But will Stephanie already have moved on? Will it be with Philly, or is he just going to be after her to be an intern?

Philip and Melanie's chat: Speaking of Philly, have you noticed how strange he has become? The show seems not to know what to do with him. Did the new writers even watch previous Days episodes before they came to the show? Did you see Trent in those Hallowe'en scary scenes, accusing Melanie of killing him? I swear, I got chills!! What a fine actor!

Philip felt bad for accusing her of murdering Trent, just because she had his wallet after his murder, (which is a stupid reason) and so she ranted this big long ten minute tirade that seemed never to end, about her innocence or something. I honestly did not listen or write it in my recap. It was a dreadful bore, didn’t' tell us anything new and was meaningless. The only good thing we got out of this was that Max was shown to Bo as a liar and Stephanie saved face. Wake me up when this is over.

Murder Suspect List: It has changed. Melanie remembered more about the night Trent was murdered. She remembers fighting with him, struggling with the knife and waking up seeing the knife in his back. I don't know if I think she's the killer anymore. She's freaking creepy though, walking away from him emotionless like that! Point is that she woke up… her head hurt… so did somebody hit her? Was it Nick? Are you surprised I'd mention him? ***TEASER ALERT*** I see that he shows up at Melanie's place, just after Melanie receives the anonymous letter! Let's see. He went from halo boy, to a heavy drinker, to getting a DUI, all after he met Mel. He has this bruising on his knuckles that came from somewhere …nobody knows… and now I am putting him back on the suspect list. This is what could have happened. Melanie either fell and hit her head or Trent hit her and she got knocked out of consciousness, and Nick witnessed the exchange and out to protect Melanie, he stabbed Trent. It could happen. Maybe he thought Trent was trying to stab Mel? The only reason why I could fathom that Nick could be the killer is that he'd do it out of protection. Kind of sucks if this is the case. Let down… but that's just my summation. It's not fact, nor did I get this from the show.

Lexi wanted Stefano to pull out of Marino's campaign, and suddenly Lexi found out Marino was murdered on Stefano's doorstep. She confronted Stefano. He denies any wrong doing, but then called somebody and (I pictured Bart!) asked, "What have you done, you fool?" We all know who killed Marino, in a sense. Stefano. But now, to kill Sami? If he knew she was pregnant, would he call off his goon?

Cliffhanger: Marlena hugged Sami Wednesday. I guess she didn't feel a baby bump, because she appeared normal after the hug. However, the verbal exchange struck me as funny… Sami says, "I'm staying with Lucas at the cabin." Marlena is surprised."On the island?" Hahaha, on Smith Island? Anyway, the cliffhanger, Friday, where baby Allie, of all people, notices mummy's baby bump was priceless! Perked EJ up a little. Let's see how this progresses. The seed has been planted. Yeah, in more ways than one, I know…

Couple of things to consider about the show this week.

The timeline is all messed up. Stories that go slowly should go fast and vice versa. On Thursday, Sami got shot at. EJ pushed her down to save her life, there was a commercial, we came back from that to see Roman, Marlena and John at the cabin, then Marlena told John to leave. Lucas had already left the manse to go to the cabin, and Nicole and Chloe were ranting about Sami's hold on EJ. Nicole wonders where the hell EJ is and suddenly, John arrives and tells them EJ's with Sami, at the cabin. Another commercial, and when we return, Chloe's gone and Nicole and John are discussing Sami's hold on EJ. Next scene is Lucas AND Chloe, arriving, together, to the cabin.

Another strange occurrence. Friday's show, everyone kept telling each other to "shut up". I think I counted over 6 times! I was brought up that it's completely rude to say, "Shut up." Instead, you're supposed to be more polite. I'm always cringing during the scenes when somebody says this and nobody asks them for an apology. Bo's the biggest rube on the show and is always saying it. Drives me… to drink. Nick, meet ya at Cheatin' Heart after work. We'll tie one on, (I'm using my mum's wording now!) you'll tell me all about the night of Trent's murder…

John Callahan Comes to Days of Our...