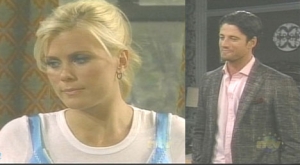 The show went from dull to great on Thursday, and left us with a nice cliffhanger on Friday… I’ve since watched Monday’s episode, so I may elude to it here! First… let’s discuss clothes!

I’m still waiting for answers to all those wardrobe questions that some of you had sent in. The new wardrobe team is really busy, I’m told, and they’re working on getting those answers. It’s really sweet of them to even help us, so I’m very thankful that they’re taking the time to do so. Thank you for your patience! That said, I have definitely noticed the change to wardrobe in the past weeks. I haven’t seen an overabundance of amazing outfits, (that I’d like to wear) and wonder how long it takes to get a feel for the character, before they start really getting into the correct wardrobe. Wardrobe is as important as anything, is it not? It can add to a scene or take away from it. I didn’t care for Sami’s outfit worn Monday, for example. I couldn’t take my eyes off it. The white t-shirt under a hideous blue silk dress was the butt ugliest thing I’ve seen on her for a long time. Then, Friday’s episode had her wearing that cuter than cute blue sweater with white dress, over blue leggings. Adorable! She went from slump to chic in days, in my eyes. Drab and unbecoming, was Lexi’s outfit Wednesday, or was it Tuesday? At any rate, beautiful Lexi needs colour. Blues, greens, yellow, red, violet… Renee is a gorgeous woman. I’d love to see her in more youthful looking attire. Yes, even though Honest Abe is running for Mayor. Honest Abe… honestly. Could they not think of a better slogan? It reminds me of Honest Ed’s in Toronto. Check it out here. Honest Ed’s is like a Toronto Landmark. Great deals on household products, but I digress. EJ had on some crazy 1980’s bluish pinstripe suit and pink shirt Thursday. Gross. This is a handsome guy. Ditch the ancient Brit look and get this guy into some delish euro threads! I’m sure he has some lovely Italian shoes in the back of his closet to go with. Chloe, on the other hand, looked so pretty in that blue ensemble on Friday’s show. It’s nice to not always see her assets on display. It takes the eye upward and allows you to hear what she’s saying. Was there anyone else who was dressed for success or downplayed recently that you can recall?

What a nasty babysitter that poor Lexi and Abe had to deal with. Monday, thankfully, Lacey was fired. Holy, did you hear her go off on Lexi? Psycho! She should be apologetic and understanding, but instead was nasty, immature and rude. She actually had the gall to involve little Theo and blame him for running off. My jaw dropped when I listened to her rant. She has nobody to blame but herself. Little wench was gossiping to friends instead of doing her J O B! Then, she couldn’t leave things alone. Instead of being proactive and looking for another job, she wanted revenge. She went to Mariano and told not only him but the rest of Salem that Abe and Lexi are horrible parents who never spend time with their little guy. “Lies, lies, lies,” screamed Lexi, in return. I’m not a violent person at all, but I truly found myself wishing somebody would give Lacey a nice shove across the room, right out the door! Bad feelings aside, she stepped up my feelings for Theo and the Autism storyline. That’s what they [the writers] needed, was to give people a reason to give a rats arse about the storyline. Let us love Theo, and care again about the Carver family, so that we can care about the story.

We saw a bit more of Marino this week, then we saw him die. It was confirmed that he's slime that takes up with Stefano. I felt that the writers should have had him on a few months to show us more of who he was. Instead, he was on three seconds and then murdered. Does this mean Abe automatically becomes Mayor? Who killed Marino? Stefano's henchman or someone else?

I knew it! I admit, I was starting to wonder if I was wrong… but it turns out that I do know Sami, and she did try to pawn the baby off as Lucas', but he didn't go for it. No more schemes, he told her. Hey, a girl's got to try, right? She, (sounding like Ali had a cold) planned on telling EJ about the baby, when she encountered a murder. Guess that means she's going back to the safe house, because (Small Teaser) the shooter knows who she is. This will be good news for Chloe, who, I'm sure would like to see the back of Sami for a while, but I guess EJ won't find out anytime soon that he's going to be a father… or will she tell him before she goes away? I'm not sure, after all, she did witness not just a murder that day but EJ making love to Nicole. Ouch.

Going backwards a little to Wednesday's show: I found the time spent with EJ and Sami was reminiscent of the days of the Carrie, Austin and Sami. I was surprised at how adult-like Sami behaved when EJ came to her as a friend, to discuss the Nicole-baby-mess. Although I think that honesty is the best policy, and I know that Sami is bringing this upon herself, I admit that I actually felt bad for both of them. EJ put on a happy face and went to Nicole to tell her he wants to be in his child's life and in her life, then asked her out. Is she second best, though? Can we blame her hormones for how desperate she's been acting? She really is irritating me this week with her impatience with EJ. Instead of being so pushy, she should relax and let EJ get used to all of this.

My question of the week was: How and when did Sami suddenly move into the Horton Cabin with Johnny? When did EJ say he was fine with this? Did I miss something? Last I remember, EJ promised to have Johnny taken away from her if she took him away from him. What is going on and why do I always feel as though I've missed a few weeks of the show? Back to EJ. He and Nicole got a paternity test, so we know the child is real and is his. Glad that the show stepped this up quickly. Stefano was thrilled to bits that he has a new soldier on the way. I adored those scenes, I admit it. I loved them. It was fun, even though poor EJ worried, likely about what Stefano had planned for the baby.

Back to the Horton Cabin… Chloe was living with Lucas there? I didn't realize. I thought she was spending time with him, but not actually living there. Chloe's blow-up about him not consulting her about Sami moving in was a bit over the top for a barely dating couple. All of these new relationships are backwards. I'd like to see someone enjoy dating before they romp in an elevator and call it love.

Stephanie and Max were, as usual, painful to watch. This is what I saw this week with those two. You did it, Melanie did it…blah blah blah wallet. Get off my screen. I'm afraid I have no feeling for these two and have nothing more to say, but I do have something to say about the suspect list. Melanie recounted the night of Trent's murder. She told Max that she and Trent fought for the knife and then when she woke up, her head was pounding and he was dead. Hrm, could she have killed him and blocked it out as we presume, or did somebody else clobber her, knife Trent, and run? Nicole's starting to look suspicious, with all that 'I hate Trent and he's dead and never going to hurt me again!' talk. Was it she? Since Marino's dead, we may want to check him off the list, but Claude's still on that list!

Kate and Daniel had sex as Dansea fans screamed, "Noooooo!" I'm still a little confused about why this is happening. Chelsea's not very forgiving, I gather because of Nick and Billie's romp, once upon a time. I realized this week that I could care less about Daniel, either way. The show has never written much about him to get me invested in him. I wanted Kate to have a man, but I suppose I saw her with a suit, not a surfer dude. About the aftermath: On one hand, if Kate wants Chelsea to forgive her, she's shooting herself in the foot by having sex again with Daniel. Selfish! On the other hand, how will Chelsea ever find out? She's got no claim to Daniel anymore. She told him to move on, so, does it really matter anymore? I guess Kate and Daniel are free to romp to their hearts delight. Still, I'd rather see her with Roman.

John threw me for a loop on Thursday, when he told Steffie he was giving up the DiMera Empire! I quickly surmised that it was part of a plan to get Marlena back, and was right. Okay, it wasn't much of a stretch, but it made me feel like fighting for the couple again. Turns out that 69% of you think they should stay together! Let's hope the show gives us what we want. A glimmer of hope. I was feeling morose about them last week.

Speaking of feeling morose, we had a spot of bad news this week. One of the show's ex-writers has passed on. I've ranted about this writer; I've also loved his creativity… James E. Reilly, who wrote for various Soaps in the past, including DAYS, from 1992-1997, and again from 2003-2006 passed on, last weekend, at age 60. Read the story here Though I wasn't always a fan of his writing, and mentioned this in my columns in the past, there's no doubt that he entertained soap fans for many years. He was the one who wrote the Marlena possessed and exorcised storyline that made me start watching the show. I did enjoy a lot of his work. Watch a clip from the episode that got me hooked, as well as a few other fun clips that I've gathered for your viewing pleasure, over on our sister site, Soap Opera Fan.
Then, check out my mini-tribute to JER on our sister blog, Soap World Mourns JER. Leave a comment if you desire to pay tribute to a creative writer no longer with us.

While this week was pretty good, I still would like to see a return to those old storylines they've started, and forgotten about and I'd like to see more of Anna and Tony. What's in store? ****SPOILER ALERT!!*** Nicole has some abdominal pains, Max does as I asked and breaks it off with niece, Stephanie, and Daniel reveals Kate's final diagnosis. Thoughts on anything you've read? I want to hear them! Please feel free to comment below!

Past Days of our Lives Actor's...