Days of our Lives Poll: The Set-Up?

Have you read Soaps.com's interviews from the Daytime Emmy Nominees Cocktail Reception? 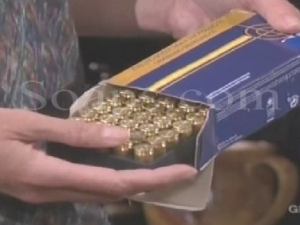 This week, Nicole managed to get into EJ’s new apartment. There’s not much there other than some coffee and brandy, but hidden behind his rolling pin and Diamond Jubilee mellon-ballers, Nicole found a box of bullets which just happen to match those that were used to shoot Stefano. Coincidence? The cops already know that the bullet and gun used were Abe’s, so why was one bullet missing? Is someone trying to point the finger? Vote in Soaps.com’s poll.

Days of our Lives Spoiler Video: It's Not Right