Days of our Lives’ Judi Evans Tackles a New Career 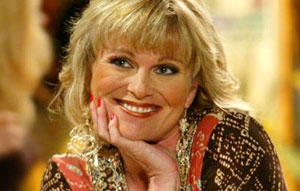 She was just nominated for a Daytime Emmy this past year, but that doesn’t guarantee job security. Since she left her role of Adrienne Johnson Kiriakis on Days, Judi Evans has discovered a new career path – selling cemetery plots.

Yep, the actress who has starred in three top soap operas over the last few decades, now works for Rose Hills Memorial Park in California. Although she still auditions for acting roles, Evans found it necessary to take on a second job.

Blogging on the CNBC website, Evans explains that working in “the industry” for over twenty years has made her a workaholic and just waiting around for her agent to call with a gig drives her crazy, so when she’s not acting, she needs something else to do. A friend suggested she look into a job at the cemetery, and since it offered great benefits and allowed her the opportunity to help people, she figured she give it a try.

It seems Judi is happy with her new position thus far, as she states in her blog, “As much as I love acting, and I do, it brings me a great deal of pleasure to interact directly with people and also help them along life’s journey.”

In addition to her roles as Adrienne and Bonnie on Days of Our Lives, and Beth Raines on Guiding Light, Judi also portrayed Paulina Cory McKinnon Carlino on “Another World” and appeared in various TV movies over the years.

Soaps.com certainly misses Judi on Days, but we applaud her ability to try new things and wish her much success in her new venture.

To read Judi’s blog on her new career, visit the CNBC website.

Two Passions Stars Come to Days of our Lives! (Update)