Friday had Kate telling Carrie to Stay In The Right Bed, proving she hasn’t lost her flair for the dramatic when she noticed the clandestine look Rafe and Carrie gave each other and responded by purchasing Carrie a lovely silver dagger as a warning. So creative but Carrie’s weak. She’ll have more issues trying to keep her skivvies on in the weeks to come. Vote: Kate's threats to Carrie.

Daniel and Nicole almost melted the screen with their heat. I think they’ve great chemistry one minute and the next I’m confounded by them. I blame the lack of balance in the stories which I hope they’ll resolve soon. I feel for the Ejole fans who are probably vomiting each time these two are on the screen and I urge them to hide their eyes during Monday’s episode.

Spencer took over Stefano’s murder case which is welcomed but begs the question, "Where is the officer who the Governor was supposed to send two weeks ago?" Surely it’s not ISA Agent Spencer so what gives? I guess it's goodbye Kent.

EJ spent the afternoon teaching young William the wise ways of how to be a DiMera, thus creating a monster. I like it but shouldn’t there eventually be bad blood between Chad and Will if we’re to keep this up? Maybe my mind is stuck on Dallas with Christopher and John Ross. Either way, it's working and again I get the feeling that William's going to get the goods on ole Elvis.

Best line of the day: Nic says, "If you knew what qualified as my idea of sex, your head would explode." What? What! Tell us!

SOF's Matt's DOOL Musings. "Cozier than a DiMera cell, it featured a comfortable duvet and thoughtfully soundproofed walls so she wouldn't be forced to listen to her captor play Guitar Hero all day. Soap Opera Fan Blog received a stage side confession that these cells keep re-appearing because the writers for the show are locked into similar cells by Corday on a daily basis."

Surprise! Find out who won this year's Sudzies Awards. I'd have voted for a few others but it's not up to me. This was a fans only survey! This is Daytime Emmy week! Find photos for the 39th Daytime Creative Emmys here and interviews from the Daytime Emmy Nominees Cocktail Reception. 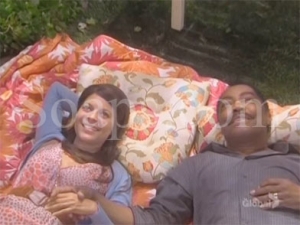 I’ve been chanting this for weeks to myself…

“We need PhillyK back on “DOOL.”

We need PhillyK back on “DOOL.”

We need PhillyK back on “DOOL.”

Am I right? On with the blog.

Monday’s show Brady was Sweating Like A Street Junkie. It was obvious to everyone that he was high yet Madison gave him the old ‘It’s not that I don’t trust you but…’ line. Seriously? So much for honesty. She doesn’t trust him. I’d assume she is within her rights to request a drug test. After all, this is affecting his work performance. Since he knows he’s high and is now craving drugs, I’m surprised it hasn’t crossed Brady’s mind yet that someone – Ian’s – been drugging him.

When Brady went to get support from his sponsor, Maggie, I wondered why Daniel tagged along until Victor started going off about all of his ex-wives for no apparent reason. With his best Mr. T impression he told Daniel, “I pity the fool that falls for her.” Forced.

I guess it was good to see Maggie and Victor get back together. I’d almost forgotten they existed. I’m not really even sure why she went back to him. It appeared as though that was for no apparent reason too, other than her falling for some crummy reverse psychology. Forced.

Are Cameron and Abigail not the most boring soap opera couple you’ve ever seen? He’s a brilliant doctor, big city boy who has never in his life heard of berry picking. Really? It’s not endearing in the least that a self-professed big city boy is that sheltered or stupid. Abby can do better.

Tuesday had Abe yelling at Lexi to Wake Up! Wake up! but alas, Lexi had already passed away. It was very neat and tidy, very sweet and somber but cancer is anything but. The storyline was well done for “DOOL” but it was romanticized a little too much for my taste especially near the end.

Melanie sensed someone was following her through town, so she did what any sane woman would do and let him follow her down to the scummy pier in the dark and then invited him to come and get her. It. Wouldn’t. Happen.

I enjoyed the touch of supernatural with Theo pinpointing the moment his mommy died and seeing Abe and EJ embrace was something you certainly don’t see every day. How long will these two be able to remain civil is anyone’s guess. What happens once Stefano returns? (I’m hoping – no assuming he will.)

Wednesday, Will told Roman, Grandpa I’m Gay. Roman, much like Lucas, seemed to be more concerned about ‘what others would think’ rather than making his own grandson feel good about himself. Sami made us all proud by exuding pride for her son with every move she made. Even more shocking was that we learned Will’s been hanging around with that cute boy Neil at that lesbian… I mean gay bar ‘The G Spot’ – the ‘g’ is silent. I feel cheated. I’d have loved to have seen William parading around with Neil. As much as Thursday’s show turned into “The Little House On The Prairie,” everyone loving Will being gay isn’t reality and we need a little shot of authenticity in this storyline right now. We need to see Will with his friends and someone like “T” around to stir things up. You can’t have things this tidy. It gets dull. At least we got to see a little Sonny and Will togetherness.

Thursday, Andrew boasted that he is Really Good At Being Bad, but that remains to be seen.

On the other side of town, likely the wrong side of the tracks, Melanie, who seemed to have forgotten every self-defense class Quinn taught her, was attempting an escape. Andrew’s doors and walls must be soundproof (though it doesn’t look like it) because neither Gabi nor Andrew heard her scraping and grappling with the locked door. I find Andrew utterly laughable. “I’m really good at being bad if you know what I mean?” I’m surprised Melanie didn’t burst out laughing. Do tell, pipsqueak. No, let me guess. You rip tags off mattresses when the warning clearly states not to. Give me a reason to be afraid for Melanie, “DOOL.” Dude is too thick to even be afraid of Melanie’s threat that the DiMera and Kiriakis families are in her back pocket. Now that is scary.