Thursday was Stefano’s memorial. The most memorable thing was Chad's mood hair, which wilts when he's low and perks up when he's pissed. Intriguing. Sami's hair was back to normal today but she was in rare form. After she practically accused her mother of murdering Stefano, she tossed her purse on Stefano’s casket and considered sticking him with a pin to ensure he was really dead. Would she have found he’s made of wax? Would she have stuck him in the heart? I know it’s ridiculous but didn’t it cross your mind? Though I don’t get her motivation, I love how she’s been so frank with EJ about her feelings for Stefano yet at the same time she has shown him a sweet and uncharacteristically unselfish side. She didn’t even bat an eyelash when EJ told his kids, "We are DiMeras." What gives? EJ received a visit from Ian of all people who couldn’t wait until Stefano’s (fake) body was cold before offering a business opportunity. What’s Ian’s MO? Though I want Stefano to be EJ’s father, I can’t help but wonder if Ian really is. I don’t really want to go there.

Theo found out his mommy’s going away like his nonno has. I don’t think he understood what it means but it was still heartbreaking. So was the battle between Mel and Chad. Many fans are annoyed with Chad right now but consider this: He lost his mother, his adoptive father doesn’t love him, he lost his father and his sister has days to live. He must feel so alone. Of course he’s going to act out. Poor Melanie was only trying to reason with him but it would have been better if she had let him go off alone for a while. I’d like to know where Gabi’s manners went. It was in poor taste of her to stand around gawking over their argument. I was so embarrassed for her. She’s lucky Marlena’s not her mother! Maybe it was the PMS – if she really had it. It makes ya crazy. Andrew knows. Moments before, she PMSed all over his ass for ruining her plans. She’s a lot of things but I doubt she’d be on board for kidnapping. Am I giving her too much credit? He reacted by deciding to kidnap Melanie. His basement looks like the warehouse used for Bo’s kidnapping and that bed screams Statesville yard sale. In fact I think it was Hope’s bed from her prison days. Who is this guy?

Though the week was a good one, Friday was atrocious. We sat in on Bope’s therapy session that almost put Matt in therapy. The duo was completely incoherent until they finally got the real issue out in the open. Bo and Hope shelled out $300 just so Bo could ask, if Hope rocked John’s Casbah – Matt’s words. I can’t believe those weren’t the first words out of his mouth when Bo learned Stefano turned her back into Princess Gina. In another boneheaded move, the show ruined yet another supercouple, Steve and Kayla (Stayla). I will admit that the story fits well. Somebody did their homework and it is easy to understand why they broke up. At least we still have Victor and Maggie (Vaggie). Oh wait. We don’t, but I have hopes for those two who I think need time.

Most memorable scene of the week:

Will: "I don't like having people think I'm a murderer. So. You gonna get me off?"
EJ: "William. I took care of your bail. It's not up to me to get you off."

Must read: SOF's Matt's DOOL Musings. "He almost came back from the dead to ask her why she didn't dye her streak black to prove it."

Find out what she's up to next in Molly Burnett's exit interview. 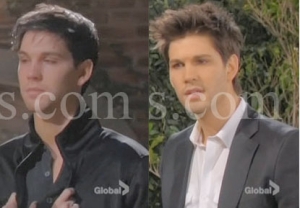 ‘Twas a good week in Salem. Many tears were shed, Gabi and Mel did a Midol Complete commercial, Kate was the only person in Salem in the dark about her grandson being arrested for murdering her husband, and a creepy bloke stalked Melanie.

Monday had us filling tissues with tears when Lexi said goodbye to Jennifer. It wasn’t lost on me that just as Jennifer’s leaving the show, her hair finally looks fantastic. I still can’t figure out how Jack will leave unless the writers break the couple up once again. It could have something to do with Jack’s book being published – a record for any book. My husband’s been writing a book for two and a half years – surely not the two and a half months that Jack’s “devoted” to his. I guess when you’re jobless, you’ve more time to dedicate. I enjoyed the exchange between EJ and Rafe and EJ sneaking into the mansion to collect private papers – likely the BS ones that show he’s not Stefano’s son. He should have burned them. They’re going to come back to haunt him. Did you find it screamingly obvious that the writers want an Abe and Kayla pairing once Lexi’s gone? Though their scene was very sweet and Kayla is a good friend, I’d rather see him get to know Maxine. Where is she? I miss her. Vote in my poll: Thoughts on Maxine.

Tuesday, Roman booked Will for murder. I was impressed that he’s been abiding by the law, but then Sami went off on dear ole dad for doing his job properly. I guess I can’t get too bent out of shape, since she’s used to the SPD getting their ‘nuts caught in the wringer’. [Courtesy of David Fix.] Still. It won’t be the greatest Father’s Day for poor Roman. Are you as puzzled as I am that EJ posted William’s bail? Seems to me that Will’s secretly happy that EJ owns him again, what with all that smirking and smiling, but how does EJ really know young William didn’t do it? Because he did? I don’t believe that because I still say Stefano’s alive. Later in the week we saw EJ tossing his black gloves into a bin at the pier everyone frequents. Was his fireplace not in working order? What if someone were to have followed him and collected the gloves? Can’t they be printed and tested for gunshot residue? Methinks EJ is slipping and that William’s going to be the one to catch him at it.

Wednesday had me loathing Marlena again. I find the only time I can stomach her lately is when she’s with Will, and then I like her and adore their relationship. When she went off on Roman, I found no excuse for her and was surprised at her rather discourteous outburst. The man explained that SPD can’t afford to make a mistake considering everyone finds them corrupt and a joke and all he got for his trouble was her harping on him. No respect.

Rafe falling for Sami’s flake of a sister is still fresh so instead of Sami using her as a lawyer, she called Justin, a corporate lawyer, to help Will with his case… Strange. Stranger still was Sami’s acceptance of EJ’s crap explanation for bailing her son out. Maybe in her relief she forgot to go after him and hound him until he broke.