Side note: I would like to know what is going on with Sami’s duck-beak bangs.

We learned that Daniel not only still gets off on getting his hands and his lips on his patients but now, he seems to have forgotten that doctors generally are also frowned upon for switching paternity tests for a patient. With everything he went through with Chloe, there is no motivation for him to do this, especially when he has no history with Nicole. Nicole told EJ "lab tests don’t lie," making me roll my eyes. I'm surprised EJ didn't bark out a laugh. In Salem, everyone and everything lies. I am siding with EJ on this one. Nic needs to fess up already. In last week’s poll, most agreed that she should have told EJ that the baby is his from day one. What comes next? The baby is born, needs some transplant of some sort that only the father can provide?

Kent stepped out of the room when Roman questioned his pals about killing Stefano, when the whole point of her shadowing him was because there’s a conflict of interest and it takes weeks for the Governor to send one of their own agents to investigate – by horse and carriage. Roman went on with the investigation without her and caught Bope and Jarlena in the act of lying. Bo blurted out, "Sorry that was wrong." In other words, "Oopsie. My bad!" What a joke. The bigger joke is Roman allowing John to speak for the entire crew by telling Roman none of them killed Stefano. This makes me loathe the four of them, which is pretty sad considering I once loved this foursome!

Thursday, as I viewed Daytime Emmy clips, Candi wrote the recap about Will being Under Arrest. Will was the only one to admit he touched the murder weapon. The smartest of all eight suspects and the only one arrested. Will explained earlier to his parents that he had fired the weapon he purchased, before he took it apart and threw it in random ditches all over town. Okay, so he’s not that smart but that doesn’t mean he killed Stefano. Did he keep that part from Roman? I can't recall.

Though it’s nice to have both parents together for any child, Carrie and Austin’s child could potentially notice something is amiss while growing up in a household where his mother’s not in love with his father. Then again, Carrie does love Austin. Perhaps she’ll fall in love with him again, or perhaps she’ll cheat on him with someone else. I don't know. I have no faith. My head hurts.

Gabi’s paid stalker Andrew is pretty quick on the draw, which makes me think he’s from a neighbouring town. He saw right through Gabi’s scheme and decided to step things up a little. I don’t think Gabi knew the rat in the salad trick was on the agenda. What else is Andrew going to do that isn't part of Gabi's scheme?

SOF's Matt's DOOL Musings. A taste: "Nicole was so grateful that she cuddled him in a way that promised other kinds of swapping." 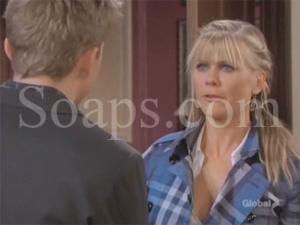 Credit: Again with the bangs. (Soaps.com)

Deconstructing “DOOL” for the week of June 4-June 7:

It’s a short week for “DOOL” with Tennis horning in on our time in Salem on Friday, but we still saw murder and bedlam the other four days of the week. Memorable happenings include EJ wearing a track suit, and Sami’s bangs continued to be ornery.

Monday in My Father’s Dead, Roman ran around town questioning some of his best buddies in the murder of Stefano Dimera, who was shot in the back and killed. (I don’t believe him to be dead.) Will shoot EJ in the same cowardly manner once upon a time. Is that just a coincidence? With a list a mile long of people who wanted Stefano dead and 8 prints on the murder weapon, we’re clueless as to who pulled the trigger. We know the murderer is right-handed and wore black gloves. EJ has black gloves. Everyone looks guilty; they are all lying to their spouses and to Salem’s “finest.” Even the cops. Bo and Hope are quite possibly the worst liars in Salem. Both touched Abe’s gun bare-handed, making them also the dumbest cops in the universe.

Kate seemed gutted to hear about Stefano’s murder. I do believe she’s devastated and loves Stefano. Still, crimes of passion have been known to happen. Speaking of which, where was Lexi during this? Sure, she left a note for Abe, telling him she went to bed but did she or was she over at the mansion, offing her father in order to protect her friends and family once she’s gone?

John did have the best line of the day when he told Marlena what he’d been up to that evening. “There was something I needed to do. Uh… nothing much.” Very convincing.

Vote in this week’s poll. Whodunit? Who shot Stefano?

Tuesday, Kate was sure that after Stefano finished Picking My Carcass Clean that he’d move on to Ian. Ian has motive and a secret. Nobody knows anything about him, really. He’s a big suspect and he’s leaving the show.

I love how Sami came right out and asked EJ if he was sure his father was really dead. Somebody had to ask. Sure he identified Stefano’s body but that’s meaningless. I still say the body was that of an impostor. Maybe someone else has kidnapped him or the CIA has something to do with this.

Roman and his shadow, Kent questioned a few suspects but the most memorable moment came when Sami told EJ it’s time he let go of Stefano’s baggage and start fresh. “If you do, we might have a chance,” she told him. He looked puzzled but she insisted she meant ‘we’ as in the family, not we as a couple. Hrm. Are the writers playing with the fans again or is this foreshadowing?

Wednesday, Sami called EJ, Fifty Shades of Messed Up, which is a line from a remarkably poorly written fan fiction book everyone’s been yammering about in the news.

Marlena apologized profusely for keeping her visit to Stefano a secret from John. She all but got on her knees sobbing yet John didn’t even bat an eyelash about doing the same thing to her. Interesting relationship. Then five minutes later she was hiding the clothing she wore to Stefano’s that fateful night. She is such a hypocrite!

Days of our Lives Saturday Teaser Poll: Another Divorce