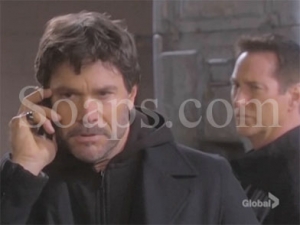 The theme this week was watching Carrie sleep. Kind of creepy. Other than that it was a mixture of sadness, fun and adventure.

Monday’s episode: Cold, Ruthless, And Unforgiving… was depressing. I love the idea Celeste had for Lexi to create DVDs for Theo and I look forward to watching those clips in the coming months and hopefully years. I felt wretched watching poor desperate Austin halting Carrie from dumping her by showing her that Martha Stewart scrapbook he had Billie make. He obviously feels desperate times call for desperate actions but it was kind of weak.

Tuesday’s episode: A Drama Queen gave us the big pay-off.

Marlena said best: “I don’t even know what we’re talking about and I already hate it.”

The coin storyline is coming off like an episode from Scooby-Doo. The mummy wants the coin while the gang tries to come up with a plot to lure the mummy into their clutches. With Jarlena, Bope and Shane – who is just another Roman – it’s utterly dull. It doesn’t matter which music it’s set to or how much the actors seem to be into it, it just needs to end already. Nobody finds it believable that Jarlena and Bope with or without Roman/Shane’s help could take down Stefano DiMera. I do appreciate what the writers were trying to do.

Guilt aside, Sami needs to stand up for herself and tell Will to stop being so disrespectful. Whether or not Sami deserves it, Will has long since crossed many boundaries. While hurting her, he’s hurting himself more, in the long run. Even Sami can see that rage and bitterness setting in. It’s almost as if there’s something else spurring him on… All that and Will came out today. The coin business and his ‘crap’ attitude snatched some of Will’s thunder, making it a bit anti-climactic. Perhaps if the actors hadn’t spoiled the scene so many months ago it’d have been interesting. Still, the acting was as always, brilliant. Vote on your thoughts about Will’s coming out storyline.

Wednesday: Brady, You're Flexing Your Muscles was hilarious!

This is the most fun I’ve had watching "Days" in a year. We needed this episode. Brady was hysterical. I rewound the meeting scene three or four times, laughing at the dribbling of the water, Brady repeating, "It’s a party, it’s a party," Serge whining about his one-of-a-kind jacket, and the quibbling. Give me more of baked Brady.

If EJ really wants Nicole back, he’s got to come up with a better plan to win her back other than bringing her chocolate muffins. He could admit he’s not a DiMera and is going up against Stefano. That might turn her head as long as he doesn't scrapbook about it.

Sami (say it with me) screwed up again and it was EJ who was the voice of reason. Sami’s never been very pragmatic and thankfully, EJ seems to be everywhere she is these days, when she needs an ear. Can you see where this relationship seems to be slowly headed? Just putting it out there. I digress. Sami was overwhelmed by the news of Will shooting EJ, Lucas going to jail, EJ blackmailing Will, and then finally she heard her son’s gay. I’d have been happy to have some good news after all the shooting and blackmail news but Sami made it all about her. The prat! While processing, she blamed EJ for William’s gayness and then blamed herself until she finally realized EJ’s right. People are born gay. It was nice to see her work through her issues but she really screwed up by running out on Will so I don’t see much forgiveness coming anytime soon.

Mr. Greene, Mr. O’Toole and his wife Charity, and Mr. Garcia went up against Nevsky and his wonder-goons, which made for a lot of laughs while they tried to make an arms deal.

Ian blathered on... "Brady you're flexing your muscles. Are you going to a birthday party or... I assume you're not going to the meeting." (A birthday party? See, even Ian’s affected by Brady’s body. Who isn’t?)

EJ, "People are born gay. If poor mothering made children gay, then all of Kate's children would be running around waving rainbow flags at Pride festivals."

Thursday's episode: I Don't Like Liars, bored me, overall. Lexi’s scenes were touching, but Cameron and Abby’s shared love of Paris was forced. I did like how they were finishing each other’s sentences, but Celeste sure didn’t. I didn’t think Melanie would have gushed about EJ’s private jet considering she was married to Phillip, who is equally wealthy. I found Chad inviting Abigail along rather strange since Abe was paying from what I could tell. With what I do not know but it seemed to me that Lexi would more likely have wanted to use that money toward an education for Theo. Thank goodness EJ saved the day first by offering his... oops... Stefano’s jet, and then by helping bringing Paris to her.

Mr. Greene, Mr. O’Toole and his wife Charity, and Mr. Garcia somehow sealed the deal with Nevsky though I truly have no bloody idea how, unless they were all speaking in code and I didn’t get have access to the decoder. This just means we’re one step closer to ending this painful storyline.

Worst line: Sami, "Sorry, have you met me?" That line needs to be retired.

Will to Sami: "Stop being a victim and grow up."

Marlena, like Rafe before, watched Carrie sleep, and after the vomiting and Ibuprofen, suggested her step-daughter might be pregnant. That puts a monkey-wrench into Cafe's plans.

Bo’s Russian accent brought tears to my eyes, it was so funny. I’ve got to hand it to the foursome. Nobody cracked a smile during that scene. Kudos. I was dying. Stefano’s just not that stupid though. He'd have caught on to the fake accent. Do you think Hope helped him with his accent? He was about as good as her English accent. I dug how Stefano smiled as Bo arrested him after the sting operation. You know this means he's up to something!

Gaby's looking awfully suspicious even to her friends, which means she'd better step up her scheme or they'll figure things out pretty fast.

And I’m off for the long weekend. Leave me a comment and then have yourself a merry little weekend.

SOF's Matt's DOOL Musings. A taste: "Thanks to Ian roofying his morning protein sludge, Brady showed up acting like Crispin Glover on steroids."

Days of our Lives Welcomes Back...