Today we heard that Eileen Davidson was let go from "Young And The Restless." I'd love her back as Kristen or Susan or both. Jason Cook left "General Hospital" due to having too many projects on the go. Maybe at some point he’ll be able to visit Salem in a small capacity. Vote to tell Soaps.com who you'd like to return to DOOL.

Thursday’s episode, Hanging Traitors In A Public Square was filled with more tears but this time they were tears of joy, when family was reunited after believing the safe-house-six had been blown to little pieces the day before. It was quite an episode – really well done, well acted. Poor Gabi let Rafe have it for letting her believe he was gone, and I really felt how alone she is in Salem. Will good-naturedly lectured Marlena, but most of them were thrilled by the news except one. Sami, as usual was focused on the lie rather than the reason for the lie. Maybe she just needs time to move from one emotion to the next. Or maybe she’s just Sami. The new safe house was a big step up from the cabin in the woods. It seemed to be taken from parts of Alice’s, the DiMera’s and Bope’s homes.

Friday’s episode, titled Enough Wallowing, had poor Abe coming to terms with what it’ll really mean to have a life without Lexi. I felt their pain. Rafe and Carrie sort of made me sick this episode, what with Carrie cheating and him stepping way over the line with another man's wife. Will was quicker than ever with the snarkiness. Sami’s guilt, which weighs her down much like battle armour must be what keeps her from slamming his head into the wall sometimes. It was interesting to see EJ side with her for a time but even more interesting was Will blurting out the truth about him – not Lucas - being the shooter at the church during the Ejami wedding. Sami handled it pretty well. I think she’s bottling up most of her anger until she confronts Lucas. The funniest bit was Will and Sami ridiculously arguing over who is working for the biggest crook.

I leave work today, wandering down to the beach to ponder over the best dynamic between a mother and son I’ve ever seen in a soap: Sami and Will’s wounded relationship.

Look who was nominated in the 39th Daytime Emmys and watch Chandler Massey’s reaction to his Emmy nomination.

SOF's Matt's DOOL Musings. A taste: "Luckily for the safe housers, the Salem Fire Department is about as competent as the police because they couldn't find the massive concrete structure hidden a foot under the ground even when they were standing on." 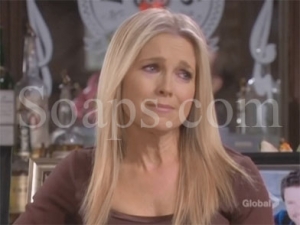 Deconstructing “DOOL” for the week of May 7-11:

Scrapbooking was the theme of the week. Other than that, there were a few powerful episodes and a lot of tears shed…

I say…Monday’s episode You Put Away Your Pitchfork was terrible. I give the show an A for effort for trying to provide some excitement and adventure with the explosion even though the execution wasn’t the best and the safe housers got out unharmed and without any telltale signs of ash on their clothing or faces. Lexi gathered the strangers (Cam and Celeste) to tell them she’s stopping all medical treatment. Those noticeably missing from the table were her brothers and father. The bucket list was an interesting touch which lightened things up but then things went downhill when Austin got on his apron and channeled Martha Stewart, hoping that making a scrapbook would bring Carrie back to him. Poor sod. The Ejami ‘almost kiss’ scene was completely edited out which made for a really baffling scene with Sami commenting on something that never happened. I don’t know the reason why that part ended up on the cutting room floor but some of the Ejami fans tell me they don’t mind. They prefer a slow build anyway. I think in order to save the scene they should have cut out the part in the script where Sami and EJ tell each other they wouldn’t do well together anyway.

Will learned his family was dead and laughed. It was startling next to Sami’s tears and made me smirk. I thought about it and it might have been my reaction too if given such devastating news. Pure disbelief.

Tuesday’s episode, They’re Coming For You, was pretty powerful. Stefano told Harmon to ‘take care’ of the safe house six but apparently he didn’t say how and Harmon somehow figured killing them was the way to go. Perhaps Stefano needs better communication with his henchmen? How ridiculous was it that Stefano told Elvis he wasn’t “allowed to trust” EJ anymore because he’s now an outsider. Stefano’s a big boy, he can make up his own mind about what he wants to do. It’s not like he hasn’t been a father to Tony, as EJ pointed out. Either the writers have no damned idea about who Stefano is or Stefano must just realize how much of a chip off the old block EJ is – that EJ could ruin him. The most shocking part of this episode was EJ calling Stefano by his first name. I felt for them both. Yep, even Stefano. I don’t understand Kate. By her own admission, she made a big mistake bedding Ian, yet still she dates him, knowing that she’s in love with Stefano. Is she afraid to be alone? And what is Ian’s reason for going after her? What is the substance he’s drugging Brady with? I thought possibly steroids but doesn’t that type of aggression Brady experienced happen over time?

Wednesday was the grief-filled episode, where half of Salem mourned for the loss of people who are alive. A Sick Small Man. The acting was well done. The mood was pretty dreary but it all happened so fast. Will let something slip in front of EJ that he has done private work for Stefano and Chad, who returned to the DiMera family three minutes ago already defended his father against Victor who accused Stefano of being behind the “deaths.” Again, warp speed.

Days of our Lives Spoiler Video: Not Two Damns Or Two Cents

Days of our Lives Saturday Teaser Poll: Who Knows?