How bizarre was the rewriting of history in that Santo scene? It didn’t work for me. If their family depended on that Anastasia egg, Stefano would have gotten it a long time ago, but I gather it has something to do with 'Yvette' so will give it a chance. What a great tie-in having Lexi’s tumor caused by the gases in the tunnels under the mansion. Vote. Tell Soaps.com if you think Stefano's responsible for Lexi's tumour.

Wednesday… I want the show to keep Dr. Yu. University Hospital lost Daniel as a surgeon, Lexi as the Chief and we need her. I like her demeanour.

Just as Chad and Melanie were off to Chicago for an exciting and sex-drenched weekend, Gabi threw a bucket of cold water on them with her stalker news. How convenient. And Melanie lost her marbles and invited Gabs to stay with Chad – without running it by him first. Gabi couldn’t have planned it better.

Nicole thinks she has feelings for Rafe which is lame and called the Florence Nightingale effect. She’s vulnerable; he likes to act like the White Knight. Nicole should brush it off but knowing her…

We also learned in this episode that Abby’s got an aura of great danger around her. That piqued my interest.

Best line: Rafe to Gabi, "Divorce is so underrated"

Thursday… Abby had me in stitches carrying on with the headless doll. "Is Johnny trying to do brain surgery on Allie's doll again?" She made the stabbing motions and everyone around her looked at her as though she had two heads.

Carrie was kind to Nicole which made me wonder why Carrie couldn’t be let in on the secret. I suppose it doesn’t matter because she would be leaving her husband for the wrong reason again anyway. Rafe once again tried to tell her the truth but his mouth doesn’t seem to know how to form the words.

Friday gave us a family day, an attack and a kiss… And it yet the episode was painfully boring all the way through. At least we learned that Abe’s working on a divorce for HoJo.

Billie did a good job on EJ, taunting him and telling him Stefano once again sabotaged him by being the source that helped get John out of jail. The sabotage list is getting longer.

Will actually smiled at Sami for a moment when he learned his mother gave up a career as a gymnast to be a mother. Maybe it’s a sign of forgiveness to come.

Sami and Lucas quickly rebounded right into each other with a kiss.

Marlena was really ditzy and twice asked John if they were overreacting by getting protection from Stefano. No honey, just from you. Everyone else has brains. Sorry I’m just feeling cranky after watching today's show but after all that has happened I was surprised at Marlena’s lack of intelligence for someone… well, so intelligent. She got the clue pretty fast when she was attacked.

My beef with Bo: How could keeping Ciara at Caroline’s pub give her any security? Caroline’s not that scary.

Dustin’s Days of our Lives blog. Dustin dishes on everything "DOOL" including the "merry-go-round" that is Ejami, Lumi and Safe.

SOF's Matt's DOOL Musings. Find out who is almost like having a white noise machine that can do your grocery shopping and move furniture! 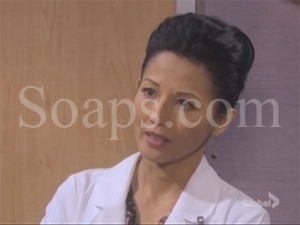 Deconstructing “DOOL” for the week of April 23-27:

This week Lexi and her family learned she has a matter of weeks to live, Rafe continued poaching on another man’s wife, after he said he wouldn’t, Kate was treated like Julia Roberts’ prostitute character in “Pretty Woman,” and it was exceptionally convenient that Lucas lost a job, was offered a job, turned a job down, was offered another job, accepted the job, lost his woman and gained another woman. I think this is the worst idea “Days of our Lives” has ever had in stripping EJ of being a DiMera and I detest that they’re once again leaning toward having him become ‘Good EJ’. I do not want EJ to be John Black’s son, which is what we’re all thinking will be the case. I’m holding out hope that EJ’s Andre or Tony’s son though I don’t know if it’s possible. I don’t care actually, as long as he’s not another Brady.

Monday was full of heartbreaking scenes… I ignored the two strangers (no offense to the actors who play Cameron and Celeste) while Lexi and Abe got the news that she has only a few weeks to live. I’m sad to see her go. Even though we knew what was coming, it’s now so final.

Ian went all “Pretty Woman” on Kate, buying her a wardrobe from her favourite designer. I know it was supposed to be a kind gesture and flying in a designer is nothing to him but it was over-the-top. A red flaming flag waving tells me it’s all about control. I’m dismayed that she didn’t even protest a little bit. She went from one controlling man to another and her eggs are once again all in the same basket.

Rafe didn’t try hard enough to tell Carrie the truth which was frustrating. I’m miffed that he is still poaching on another man’s territory and that Carrie’s lying to Austin once again. Austin is still in limbo. We know Carrie’s just staying with Austin because she thinks Rafe is Nicole’s baby daddy. Bets that the moment she learns the truth she dumps Austin?

Tuesday Nicole gave EJ an ultimatum… I like EJ with Nicole for all the reasons EJ likes Ejole. I can understand Nicole’s position – why she’d ask to move outside of Salem in order to get away from the memories. It’s a good idea for their relationship, of course not for the children or for us viewers. If Nicole really wants to be with him, she needs to forgive what he did and move on in Salem with him, not give him an ultimatum.

Days of our Lives Spoiler Video: In Never Never Land