Days of our Lives Alum Shelby Young In The Midnight Game 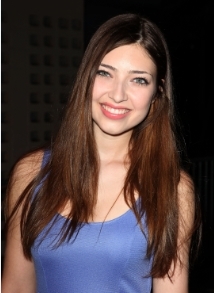 Former “Days of our Lives” actress Shelby Young (ex-Kinsey) has been cast as Rose in the upcoming feature film, “The Midnight Game.” The movie, written and directed by A.D. Calvo, has just started shooting in Wallingford, Connecticut. It co-stars Renee Olstead (“The Secret Life of the American Teenager”), Deborah Twiss (“School of Rock: Zombie Etiquette”) and former “As The World Turns” star Valentina de Angelis (ex-Faith).

“Having so much fun filming ‘The Midnight Game!’ Amazing cast, crew & director. And I’m loving Connecticut!” Young wrote on her official Facebook page.

For more on what she’s has been up to, read Shelby Young In American Horror Story.

Days of our Lives' Eric Martsolf At...