Our new mystery: Vote! Who is EJ’s baby daddy? John? Ian? Tony? Is Susan still the baby mama? Is that why he needed the Anastasia egg? Because it’s got something to do with EJ’s real father?

Reunited.
Bradison reunited with the usual sex and a boudoir proposal. We’ll see how long Ian allows them to be happy before continuing on "the next phase." Ian’s getting more interesting by the day.

Young William:
In my "Should Will & Sonny hook up?" poll the majority were in favour of this pairing while the rest either were not sure yet or thought Will should play the field. Some folks on both sites didn’t think Will should date anyone so soon after coming out of the closet but it’s not like swimming where you should wait twenty minutes and then dive in. I’m not sure he needs time to reflect on his gayness. He’s at peace for the most part with who he is so he can be open to finding someone he can have fun with at the very least. I vote for Sonny though it will be fun and healthy for Will to date around before realizing he and Sonny are compatible. My big concern is with the writing changes, will we still have this great storyline?

Billie:
I like that Billie’s laughter seems genuine and comes quick to the actress. I wonder if once EJ learns he’s not Stefano’s he’ll team up with Billie to get to Stefano.

Bo wakes up.
Bope scenes in the hospital were very sweet and for a moment I was worried he was going to have amnesia when he woke up. It was funny that he got out of bed without too much difficulty after being in a coma for weeks just so he could puff out his chest at Stefano. It was very ‘Bo’.

Carrie/Rafe/Austin.
*sigh* Carrie needs to leave Austin and be alone to figure out who she is before she's with any man. Run Rafe!

Please feel free to share your own thoughts on the changes to the show and what happened this week, below. 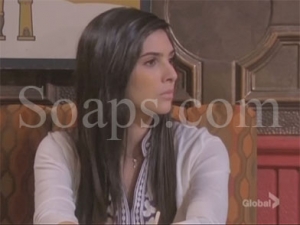 Credit: What's the "next phase?" (Soaps.com)

Deconstructing “DOOL” for the week of April 16-20:

The damsels in distress are piling up in Salem. There has been a lot of bellowing going on, a little sexual healing, the big news was that EJ’s not Stefano’s biological son. The most fun was Austin’s eyes bugging out when he noticed Rafe’s man-sized-bowl of ice cream. Tell me that wasn’t a double entendre. That or my mind just ‘goes there’. Didn’t yours? Anyway, on with the blog…

Uninspiring couple-to-be.
Just like when Madison and Brady met, “Days” had Abby and Cameron (Cabby? Aberon?) literally bumping into one another upon meeting the first few times. Since there was no fainting couch nearby, she slipped on the wet floor at the pub and like a White Knight, he saved her ass. The third time this damsel in distress was saved after choking on popcorn. Mel the nurse waited for Cameron to save Abigail as part of her master plan to set the duo up. Cameron must have gotten tips from Rafe or Daniel on how to be the White Knight. Abby and Cameron had real chemistry for a few seconds after the popcorn incident but forced chemistry can be fleeting. Cameron’s joking around made him more likeable.

The word ‘inoperable’ automatically makes me think of death.
Watching Abe asking Lexi to tell EJ the truth about her tumour was heartbreaking. I can’t imagine how Stefano is going to take this news. Once she’s gone, he’ll have to resort to either kidnapping or an attempt to get custody of Theo so he can turn Theo into another EJ. Maybe he’ll kidnap and brainwash Chad? I was a little surprised that Lexi decided to stay working for EJ instead of spending every minute possible with family but I suppose it’s best to keep busy. I’ve also been wondering when they’ll start discussing radiation, chemotherapy or alternative medicine.

She’s like a dog with a bone.
Gabi is one determined, demented, dame. I love how Will tried to get her to stop pulling a Sami by going after men who don’t want her. Gabi’s mean-girl routine is working for me. I assume we’ll find out at some point that there are some pretty deep scars underneath her outer beauty. It’s refreshing to see someone who isn’t a damsel in distress but don’t you think Will should warn Melanie and Chad? Were you wondering how Will can befriend someone who wants to hurt his other friends?

Questionable young ladies.
Chad’s got babes coming out of the woodwork throwing themselves at him and sticking their tongues down his throat but where are the hotties when Melanie and Abigail wander the square? Aren’t these two models as well?

“Set the next phase in motion.”
Kate’s not one to beg, so I was extra heart-wrenched for her when she begged Stefano to forgive her but he sneered that she was dead to him. Could there be another secretive reason Stefano tested her? I just can’t help but feel the entire thing is over the top. If Kate’s not around, who will take care of his diabetes?

Ian’s almost as calculating and about as misogynistic as Stefano. I can’t believe Stefano threw out Kate’s belongings and took her companies. It’s a little harsh for a one-night stand. I also can’t believe Kate blamed Ian for putting her in this predicament when she’s the one who couldn’t …what’s that unpleasant expression? “Keep it in her pants.” I’m not sure if I should be surprised that Kate gave Stefano controlling interest in her two companies. Maybe it was part of their agreement when he kept her out of jail by marrying her. Otherwise I can’t fathom why she – Kate Roberts – not a damsel in distress – would do this! Stefano was almost too giddy this week going up against his non-biological son and his soon-to-be-ex-wife. It was pretty funny but in the end he’s such a sad figure. It’s too bad that blood means so much to Stefano because EJ is his son in all the ways that matter.

I find it difficult to believe Sami is this stupid to take a job working for Stefano. Doesn’t she remember how the whole Stan debacle turned out? As if she would do this five minutes after busting Will’s chops about working for EJ! The very same man she offered friendship. It’s all baffling isn’t it?

Days of our Lives Spoiler Video: Sudden Change Of Heart