What’s to come?
I actually enjoyed Bradison’s scenes Monday. Ironic considering Madi’s leaving. I wonder where her exit will leave Brady. As for Jack, he returned with his gripping PTSD storyline and then was ignored until they rushed Jack ‘n’ Jenn back together in the most anti-climactic way. If memory serves me correctly, it was the great Ralph Waldo Emerson who said, "Life’s a journey, not a destination." In this case, fans were robbed. Fans are wondering how they’ll write Jack out and what will come of Carrie and Austin. "days78," a poster on Soaps.com asks, "Why didn’t the writers weave Austin into Will's storyline? Will thought of him as a father figure for most of his young life yet there has been barely a scene with them."

Ejami?
EJ really kissed Samanther to show that there was nothing between them? Fans everywhere could sense the attraction. There was a lot of chemistry between them but they admitted to each other that they were toxic together. They’re toxic period but I don’t really recall them actually ever being "together" properly to show fans what this couple could be like other than a teaser here, forced and grief sex there and a forced marriage. They had that one encounter when Lucas was jailed that led to the twins but Ejami fans haven’t had what Lumi and Safe fans have enjoyed. Maybe they’re more toxic apart. I’m not sure but I found that scene both enjoyable and sort of a moot point. What exactly are the writers saying? Ejami will never be? Will the new writers change that or not?

Hot! Hot! Hot!
Chelanie's chemistry burned up the screen once again. These two are slowly becoming my fave couple which I hope doesn't spell doom considering the music playing while unbalanced Gabi tore up their photo into a million little pieces.

Please vote about which DOOL actor/character you'll miss the most and feel free to share your own thoughts on the changes to the show and what happened this week, below.

Have a laugh. Read SOF's Matt's DOOL Musings. They're on the blog this week. Matt says, "Someone with a sweet tooth should never marry a diabetic."

Back by demand, a new Soaps.com Primetime Dish for the week. 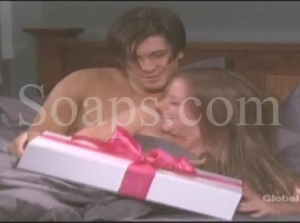 Deconstructing “DOOL” for the week of April 9-13:

Fans were shocked when “Days of our Lives” axed Matthew Ashford (Jack), Sarah Brown (Madison), Christie Clark (Carrie) and Patrick Muldoon (Austin) this week, which is only the start of more epic changes to come. Co-Executive Producer Greg Meng spoke with TV Guide about the new writers’ stories which commence airing mid-August. He previewed what’s to come. “We have some really big stuff coming up in the next few months, especially prior to the Olympics.” The show is off for two weeks during the summer Olympics and Meng says, “The week leading up to that is huge and it ends in a great cliffhanger. Then there are a lot of surprises the Monday we come back.” Apparently they’re must-see episodes. Meng also admitted, “In hindsight, I do think too many couples splitting up has been an issue.” It was good to see this addressed since breaking up almost every couple in Salem has been almost as depressing as Higley’s tenure with the show. Why is it that each new writer always thinks major change is the way to bring the show back when consistent and decent writing is all fans want? I’d rather see less hype about yet another reboot and just get on with storytelling already, before we lose the show for good. Fans took to Twitter yesterday to voice their opinion about what’s to come and I believe you can get involved again today by participating in the tweetfest to get #DaysAngryViewer trending once again at 4:30 PM EST. On with what happened this week.

Why ruin a good thing?
Another cheating storyline reared its ugly head and worse, Stefano actually invited the discord into his life! It’s not fair of him to test his wife’s fidelity. Pushing Kate into Ian’s arms and then punishing her for it is the most ridiculous of all of the break-ups. Does he want a lonely life? I’d like this storyline erased from my memory. I’m upset they’ve broken up State and I don’t trust that Ian’s not up to something. After the way Ian treated Madi, I wonder what Kate’s in for. It’s also a shame that the people Stefano leans on are random goons. It’s been this way since Kristen, Tony and Bart were ripped from his life and he has never fully trusted EJ. I keep getting this feeling that the DiMera family is being written out. If true, this would be a travesty. Salem without the DiMera family would be unspeakably bland.

Celeste and Cameron:
Neither character is working for me. I don’t see that changing. Bringing in unknowns at a time when a favourite character is dying is absolutely asinine. I’d rather that Celeste couldn’t make it to see Lexi due to an illness than ruin the story with Lexi playing opposite someone who gets to play the character at its most compelling when the audience sees her as a stranger. And who cares about some sudden lame brother who whines like a child over spilt milk when his photo falls on the ground? Oy.

Days of our Lives Spoiler Video: Back In Salem