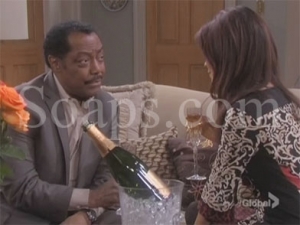 Deconstructing “DOOL” for the week of April 2-5:

Big announcement this week – brand new head writers Marlene McPherson and Darrell Ray Thomas Jr. are being replaced by former Co-Executive Producer and one-time Co-Head Writer Gary Tomlin and former Co-Head Writer Christopher Whitesell. McPherson tweeted, “NBC never let us tell our stories. They kept stopping us and changing our direction.” While the reboot didn’t help with the show’s ratings, McPherson and Thomas are responsible for the Will coming out storyline, which has been a real work of art but the rest has had issues. I don’t know who is to blame and it’s a moot point by now. I hope to see more consistency behind the scenes which could do the show a world of good.

Slut shaming.
Boy Sami sure likes to injure women by throwing the ‘slut’ word around. She knows how to push Carrie’s buttons and she sure hates women. I don’t think ‘slut’ is the correct word she needs to express her anger with. I’m not a fan of shaming women for their sexuality either. Wouldn’t it be better to hit Carrie where it hurts? Sami should learn to curb those impulses and take something for that verbal diarrhea.

Sami sure took the news about Rafe knocking up Nicole well – a little too well for someone who was being written as the female part of another Jarlena couple. How’s that for a kick in the pants Safe fans?

The Princess and The Pawn.
Gina and John didn’t seem to mind waking up in a smelly dank dark cell. They didn’t question why they were there. They were a little too accepting of Stefano’s refusal to clue them in when they asked where they’ve been all these years, too. If Stefano’s so bright, wouldn’t he have implanted them with fake memories of the past few years in order to placate them and make them easier to handle? Seems to me he could have told them he was Caesar and they’d have believed it. This storyline has more than a few issues and I don’t just mean Gina randomly slipping in and out of that foreign accent but thankfully there is an end in sight.

Platitude hell.
When Carrie asked Marlena for advice on what to do about Rafe, Marlena gave her step-daughter a wealth of platitudes she likely read in a book before they met. I admit I was surprised Marlena he didn’t ask Carrie to consider how being with Rafe would affect Sami, Sami’s kids or the rest of the family. Can she not separate being a mother from being a psychiatrist long enough to tell her kid to get a freaking clue? With all due respect to the therapy community, sometimes it’s best just to be a mum to your kids and leave the psycho-babble at work. They may appreciate that too.

Rafe’s intelligence questioned by fans.
Rafe’s been through playing ‘let’s hide the baby’ once before. Even Nicole can’t figure out his motivations, it seems the more um… short-sighted he becomes. One would think he’d have nothing whatsoever to do with Nicole or EJ after spending time in EJ’s cells and watching RoboRafe (may he rest in peace) take over his life. Doesn’t he worry it’ll happen again? Doesn’t anyone in Salem ever consider simply leaving town forever in order to stay away from Stefano’s wrath? Perhaps Rafe isn’t as altruistic as he projects. My guess was confirmed this week - he can’t help but want to inflict pain on EJ. Nicole should come clean with EJ.

What should Rafe do? Vote! Should Rafe play "hide the baby from EJ" with Nicole?

Fickle.
Just because Carrie’s always been fickle doesn’t mean that whoever has been running the show at "Days" has to make Sami fickle too. Sami was deeply in love with Rafe five minutes ago and now she’s supposed to either have unresolved feelings for EJ and or Lucas? That or maybe as she stated, she only professed to be in love with Lucas due to her desperation to keep him in Salem because she’s alienated every other person in her life. Lucas called her on wanting to be with him because he’s unavailable which reminds me of Carrie who prefers the chase. Now that Sami’s not latching on to Austin, Carrie doesn’t want him.

Lap of luxury?
In the spoilers, EJ was supposed to show Sami a luxurious apartment. He must have changed his mind before they went up to the suite and instead showed her the standard el cheapo unit. Either that or EJ, Sami and I have wildly differing ideas on what luxury means. Well, at least it's not the loft. At first it didn’t look as though there was anything in it for him but he is EJ after all, and soon it was revealed that he was using his kids to project a better image for Salem’s newest mayor. Hey, he needs all the help he can get.

Paying EJ back.
I was reminded about the one thing I have respected about Sami. She has never demanded alimony, never demeaned herself by being a kept woman. She proved that by working at CW and Madworld she can take care of herself and I think she can do it again if the writers gave her a chance. Right now she may still be able to live off her pay from CW and MadWorld and maybe unemployment insurance while she finds a new job.

Celeste and her tarot cards.
I’ve always loved Celeste for her eccentricity but her arrival Thursday was awkward. Thankfully Abe saved the day with a few sarcastic quips.

Gabster.
She’s mean, mean, mean! Poor Melanie. I’d love to see Gabi work with EJ instead of going down this road to destruction. It could be more interesting.

Last thoughts...Fave thread title of the week: "Why does EJ get to Father all the Babies?" By 'Doc04'.

Stay tuned Friday for SOF's Matt's DOOL Musings which always give me a chuckle.