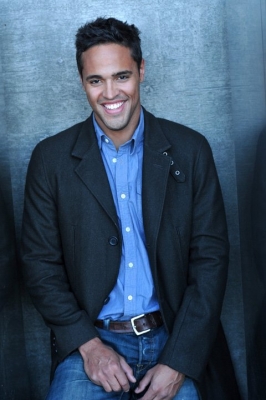 Tall, dark and incredibly handsome, Schuyler Yancey is the new doc in town on “Days of Our Lives”, and the son of Celeste with a mystery daddy. We got to talk with Yancey about his debut this week, his potential romantic partner and whoever could possibly be his dad.

Soaps.com: So how has it been working on “DOOL” for the past few months?

Schuyler: It’s been fantastic. This is my first series regular, and coming into a group as tightly knit as this show is can be a little intimidating at first, but every person on the show, from the cast to the crew just kind of welcomed me into the fold, no questions asked. It has been amazing.

Soaps.com: So are you going to be watching your first episode this week?

Soaps.com: Are your family and friends pretty excited for you?

Schuyler: Oh yeah. They are incredibly excited, my phone has been blowing up. Text messages and emails from direct family, extended family, they are all pretty pumped up. I have to keep my fingers crossed I don’t look like a total nerd tomorrow.

Soaps.com: Can you give is a little insight into Cameron’s character?

Schuyler: Dr. Cameron Davis was taken from Celeste when he was 5-years-old and raised by his father, who has yet to be revealed. So he has recently connected with Celeste, which, from my perspective, has been something Cameron has wanted for a long time. I think he had a very – with his upbringing there was a lot of solitude. He went to boarding schools, things like that. So having a family connection has been paramount in terms of things that he wanted to find and ground himself in his life. And coming into that and finding his mother and also finding that he has a half sister (Lexi) is huge for him.

Soaps.com: So obviously Cameron knows who his father is.

Soaps.com: So will he be in Salem? A lot of people are speculating that it is Stefano.

Schuyler: You’ll have to stay tuned for that one.

Soaps.com: We know you have some scenes with Abigail. Can we anticipate an eventual pairing there?

Schuyler: I feel like Cameron is coming in and there are a lot of young ladies in town and you never know how that is really going to play out. You know how soap operas are.

Soaps.com: So are you going to be working at the hospital?

Schuyler: Yes, eventually. I haven’t gotten a whole lot of that aspect of the character yet, but I am looking forward to it.

Soaps.com: Do you know coming to town that Lexie is your half-sister or do you find that out once you get there?

Schuyler: I know. I recently had reconnected with Celeste, so I have been brought up knowing more than Lexie has. She wanted to keep it as a surprise, so we are introduced. But I knew about her.

Soaps.com: How do Cameron and Celeste get along? Is there any tension?

Schuyler: No, she is great. That kind of connection was something I had been yearning for my entire life. I have friends who are the product of single parents and they always kind of have that want for the other side. And I think it is the same for him. So finding her has been amazing. Of course, Celeste is an interesting personality and they don’t see eye-to-eye on everything. But you will see how that plays out.

Soaps.com: Other than knowing who your dad is, are you coming to town with any other secrets?

Schuyler: Again, you are going to have to watch for that.

Soaps.com: Is there anything else you would like to say to the fans of “DOOL”?

Schuyler: The fan base of the show has been incredibly supportive so far, and I am so excited for them to see my first episode and they have already welcomed me, but to welcome me even further and provide them with some quality TV.

Think you know who Cameron’s dad is? Let us know in the comments. Also, catch up with Celeste by reading our Interview with Beverly Todd