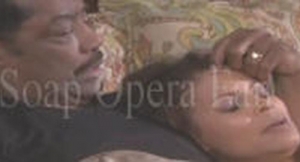 Deconstructing “DOOL” for the week of March 26-30:

Last week I ranted up a storm in my DOOL blog after weeks of bottling up my ever growing feelings of ambivalence about the show, trying to stay positive. Though it felt good to get out my issues with “Days,” it never really feels good to pick apart a show you enjoy. I fear this column isn’t much better, but we all have a right to voice our opinion so with that in mind, I’ll start and you’ll hopefully leave me your own thoughts in the comments sections. Last week’s were interesting.

I sigh when I write that it was another horridly depressing week of repeats and still there is no end in sight. There seem to be a few dropped storylines that the fans are all a buzz about. Before Stefano left town, he cried over whatever was in the envelope from Alice. Did he leave town because of what was in the envelope? I doubt that. He likes to strategically plan every move he makes so likely he planned the trip to Alamainia and of course, everything that came after it. I suppose the Anastasia Egg could have something to do with the photo of EJ that is no longer placed on the piano or bookcase (dropped storyline?) or perhaps the bank statements of Alice’s that can’t be explained – another dropped storyline? I’m not sure but at this point I just want Dirty Harry and Dirty Harriet to hurry the hell up and steal the fugly Anastasia Egg and end this story already. The good news is that the writers seem to be rushing each storyline along. Or is that good news?

Hey at least “DOOL” has the funniest one-liners. Vote in which is your fave one-liner on DOOL this week!

Jarlena:
‘Guest’ on Soap Opera Fan’s comment section says this about Jarlena, “They can do more than just look dreamy and kiss endlessly.” No I don’t believe they actually can, Guest. I wouldn’t mind if they were with other people. I liked John with Kate.

Gabi.
Gabi and Abby. Not only do their names rhyme but I guess one cray-cray isn’t enough and now Gabster’s wearing black leather to ‘show’ us just how bad-ass she is. Oy. Hrm. Did someone forget that Gabi and Rafe are siblings? They’ve not been in touch in eons which makes me wonder if they’re paving the way for a ‘goodbye Gabi’ story ala Nick Fallon.

Will’s sexuality.
Poor Will has been badgered by Marlena, Kate and Lucas about his sexuality. I can’t imagine how his head must be swimming. Part of me thinks the old birds need to leave him the hell alone and let him come out at his own speed while the other half thinks at least Marlena’s babbling has been very helpful to him. Kate isn’t the most sensitive blue-haired grand-mère in Salem but at least she doesn’t have a problem with anyone’s sexuality. What was up with Will telling Lucas that Roman warned him away from ‘the gays’ the way Lucas did? Roman did no such thing. He offered to help bring down anyone caught giving Sonny a hard time about being gay. Case of breakdown or script writers’ not paying attention? Don’t they have fact checkers or are they too busy checking facts from 15 years ago to get to this? Back to Lucas. My first thought when he warned Will against horsing around with Sonny was to be offended. I’m not sure if he’s homophobic or not based on that one comment but he does live in Salem and I’m not altogether sure they’re that progressive there. I’m pretty sure most Salemites have only seen 5 gay people – ever – so I’ll let it go this once.

Will and Marlena’s scene once again discussing his sexuality blew me away thanks to the great dialogue and great acting. Chandler Massey’s doing fabulously as usual.

Carrie, Austin and Rafe.
It doesn’t matter to Carrie whether or not Austin stepped out on her. He doesn’t stand a chance. Hey Austin, Abby’s still single.

Did I miss something?
Spencer went missing in Alamainia and suddenly he turns up in Salem and talks to ISA Agent Billie, but neither of them has mentioned Hope or John. Do Billie and John know each other is working for the ISA?

Same old same old.
Who else has noticed that Nicole and Rafe’s story is exceedingly similar to Sami and Rafe’s safe house story? Pregnant woman in hiding, each child conceived by EJ DiMera and poor Rafe who proved himself in the Robo-Rafe (rest his soul) story gets to do a repeat of how turned on he gets by pregnant women in hiding? Anyone else’s intelligence insulted?

What’s next? Will Caroline change the paternity tests to make Rafe look like the real daddy when it comes out that Nic’s pregnant?

Merry-go-round:
EJ told Nicole she’s the only ‘girl’ he has ever loved. First, she’s a woman, and second, he loved Sami and Taylor and I think he told them the same thing.

Not the only miracle.
From the fast pace of the show I almost expected Daniel to comment to Nicole the last time he examined her that she’s in her second trimester. The morning sickness magically disappeared in one day. Caroline makes miracle burgers for ‘girls’ with miracle babies.

Lonely or desperate.
"Sami must be lonely or desperate," many fans are saying, to sit with EJ and discuss how sex together was always great. This is a woman who hated EJ’s guts bitterly just a few minutes ago who dreamily admitted the sex with EJ has always been great? Is this all a dream? Are McPherson and Thomas taking the phrase ‘A fine line between love and hate’ a little too literally? There’s a lot of ignorance out there about this phrase. Just because some of the nervous circuits in the brain respond the same for romantic love as they do for hate does not mean that two people who claim to hate one another actually love each other. Sometimes watching this show makes me feel like I’ve dropped a few IQ points.

Is this seriously how the writing is going to go to get Ejami back? Couldn't it be a little more creative and not just be about sex?

Classic soap.
Abe and Lexi got back together just in time for Lexi to have a mysterious and ominous headache. I’m laughing. Are you?

That’s all I’ve got. My apologies if it’s not positive. I’m a positive person, but even I can’t put a positive spin on "Days" right now and I never did promise rainbows and unicorns!

Maybe SOF's Matt's DOOL Musings will give you a chuckle.

Amy’s been posting this great Soaps.com Primtime Dish weekly, with loads of news and scoops about tons of your favourite Primetime shows. Have a peek.