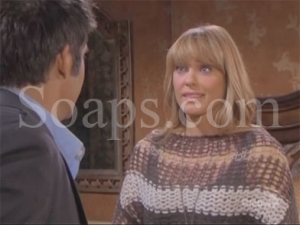 Deconstructing “DOOL” for the week of March 19-23:

While some of the dialogue was funny and appreciated throughout the week, three episodes this week actually made my head spin and gave me headaches. The pace has sped up a little and the airing of dirty laundry and screaming matches are overwhelming. This isn’t a soap anymore, it’s reality TV. I’m honestly not sure if I like the show or not right now. It feels as though it’s in that in-between stage where new writers take over and don’t know what to do with the characters so they put them all in similar storylines and hope for the best. Problem is McPherson and Thomas’ shows have been airing since September 26, 2011 so what’s going on? In interviews, the duo had expressed the desire to bring back romance and but somewhere along the way that hasn’t worked out for them and we’ve taken a gigantic step backward into the 1990s and now fans don’t seem to be able to relate anymore. I’m pretty ranty today so be prepared…

Confessions:
Sami’s confession scene to Lucas about being the mole made my head hurt. Matt suggested they’re being written by the same breakdown or script-writer. Either way, though I like their friendship, it’s a little of the same-old garbage from ages ago with Lucas rushing to be by Sami’s side while she screws up her life. I guess I’m over that. On the other hand, the scene of Kate revealing that she knows Sami’s the mole dragged on so long I stopped listening.

Airing dirty laundry.
I was humiliated for the threesome who sniped at each other at the pub. Carrie, Austin and Sami behaved as four year olds trying to one up the other in front of Marlena, in order to get her to take their side. She only shamed them. Rafe was the only one with dignity and I respected that. Poor Caroline cried while listening to the sniping and the only person who apologized for the display was Rafe and his only contribution was to sigh and say that the kiss was blown out of proportion. I’m shaking my head.

Misogyny rears its ugly head.
EJ’s absolutely deplorable behaviour after coming across a shirtless Rafe in EJ’s estranged wife’s bed was unforgivable. I understand he’s devastated after finding her with another man but his conduct was inexcusable. Why does each head writer, breakdown writer and script writer insist on making EJ into someone nobody on earth could possibly relate to? Even Stefano in his prime of ‘evil overlord’ never uttered the despicable things EJ said to Nicole. Nicole is not a whore, never was. She doesn’t have communicable diseases, nor does she owe him an explanation for what she does with Rafe in her own room. Why the hell did he have a key to her hotel room anyway? She and EJ are not together and she told him they were through for good. Even when she discovered his indiscretion with Sami or with Taylor, she still didn’t act as childish or inhuman as he has. I’m fed up with the way some of the characters are written in ways that are so over the top it’s difficult to ever repair the damage. I liked them together but as usual, each head writer has ruined each relationship I have enjoyed EJ having by crossing some boundary.

Abhorrent parenting from the martyr.
Poor Abe. He had to listen to his wife Dr. Jekyll admit she told Theo that his father is "not one of the good guys anymore," and after Abe practically fell out of his chair in misery, Mrs. Hyde came out and smoothed things over by admitting that each night before Theo goes to sleep, she tells him (his no good) Daddy loves him. What the $%^&? Abe should have told her off. Nowhere in the conversation did she tell the sweet, young, impressionable and Autistic son Theo that people are innocent until proven guilty? Where was Marlena to shame her?! Lexi might want to get down off her soap box and clue in that Abe’s only human and that one mistake even if he made just the one, hardly makes him one of the ‘bad guys’.

Sami hides Grace repeat.
Seriously? We’re already repeating with Nicole what Sami did a mere few years ago? Are they going to recycle the dialogue from that whole story as well?

Character issues.
Bricole, a Soaps.com poster asks why the show is so invested in writing for Madison when she’s one of the most unpopular characters on the show. It’s a mystery to me. That and why a 30 year old blubbers all over her teddy bear. It’s just one more reason for me to loathe this character. Who can root for the woman who allows an SOB to walk all over her? What year is this? What are they teaching their viewers? Do they even like women?

Chad DiMera, who thankfully now has a home, has been both underused and misused which is a shame considering the actor has proved himself worthy of being embroiled in a hotter storyline than a romance from a teen novel. Speaking of teens, isn’t Gabi a little too old to be acting like a catty teenager? She went from a sweet albeit boring girl to a "mean girl" in ten minutes, but her upbringing doesn’t fit with her sudden scheming. It’s difficult to even care about Gabi’s ploys when the majority of viewers have expressed their interest in a Chelanie pairing. I suppose everyone under the sun will root for Cheleanie considering Melanie has grown into a reasonable person anyone would want to befriend but if that’s the case, where is the story? Don’t even get me started on Sonny, who even when he has a story has no story. Give me more Sonny. Give me Wilson! Their wrestling scene was muy caliente!

Build up the couples only to rip them apart.
Where’s the love in the afternoon? Victor and Maggie and Justin and Adrienne, two couples rarely shown, are the only happy ones in Salem right now and it’s only because they are rarely on canvas. Chad and Melanie are barely a couple but already the question of cheating is coming up. It’s the only theme on the show right now. It’s obvious that McPherson and Thomas don’t want anyone to invest in any couple on "Days of our Lives." Forgive me for speculating but are they pulling from their own lives for the storylines here? I sure hope not but it does make one wonder. First Higley went to some pretty dark places and now "Days" is all about who is cheating on whom. And where is the respect for fanbases? Daniel took a mere three weeks to get over his love for Jennifer, a love that several fans were rooting for, only to have her not wind up with Jack, either? Who are the fans supposed to root for? Why should they watch? Give them a reason.

Many fans are discussing boycotting the show if Rafe and Nicole are put together, if Daniel and Billie are a couple or if Rafe and Carrie get together. Rafe and Nicole have serious chemistry but that doesn’t automatically mean they need to jump into a relationship. It’s nice they’re able to commiserate together. Daniel and Billie have zero chemistry and thoughts of them as a couple gives a bad taste in many viewers’ mouths considering he has been with her mother and her daughter. You can’t erase history so don’t go there. Rafe’s too good for Carrie, who will soon become bored of him and seek her next love interest so how can fans possibly invest in them?

Incidentally, who is your favourite Billie Reed? Vote!

As always, I’d love to hear your own thoughts so please leave me a message.

Read SOF's Matt's DOOL Musing's hilarious take on what went down this week on the show.