Interview with Bill And Susan Seaforth Hayes on their new novel 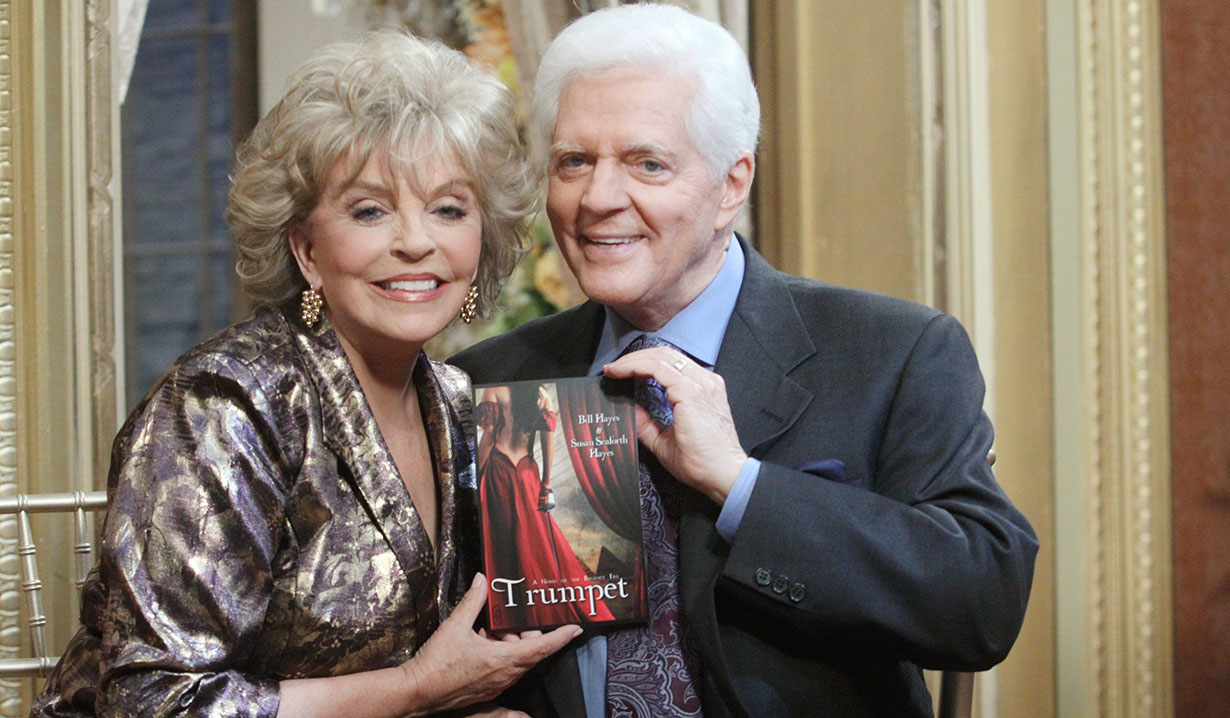 Bill and Susan Hayes, best known as Doug and Julie Williams on the long-running Daytime drama “Days of Our Lives,” have written their first historical fiction novel together, “Trumpet.” The novel will be released in ebook format on March 20, 2012 and several weeks later in print. The couple who met on the set of “DOOL” 40 years ago, which they consider lucky casting, talks with us about their extensive travels, meticulous research and the show that brought them together.

Soaps.com: Why don’t you tell us about the book?

Susan: We have been working on it for seven years. We have traveled all over the world doing research on it. It is a historical novel. It has everything to do with the theatrics of life. Our heroine makes her first appearance in 1803 and the book covers her career in England and Europe and Egypt.

Soaps.com: Why did you decide to write this book together?

Susan: Well, it’s our second book. We have written a double autobiography in 2005 that was met with much success, “Like Sands Through The Hour Glass,” which was mainly about our characters on “Days of Our Lives,” Doug and Julie. I started acting when I was 4-years-old and had a lot of experiences besides being Julie on “Days of our Lives” in that book. And when we finished with it, it was suggested that we were pretty good at writing and perhaps we should have a go at fiction.

Bill: And so we have.

Susan: We chose the Regency era, which we both love, and the theatrical life of England, which is fascinating. And a heroine that we felt we could relate to. And I have to say most everything we know about acting and actors is in this book, and it is entitled “Trumpet,” which is the character’s name. It has nothing whatever to do with a brass band.

Soaps.com: Is it easy writing together? Is it difficult?

Susan: It is wonderful.

Bill: It has been quite easy. Our memoir, we wrote he said, she said. We each write certain parts and did not try and write as one voice. But in this instance, we determined right away that we wanted to use just one voice. We chose an omniscient narrator and it has been an amicable writing process. I don’t know if you can count on one hand the times we have disagreed about things. It has just been natural. Susan will write something and I will comment on it or edit it or she will write something and take it to another level. It has been a pleasant association.

Susan: I would say it has been more than pleasant because we have had for these years our own secret world that we go into that nobody else knows about that is full of characters we have created and realities of historical events of the time. The book is full of characters who really lived, actors and actresses who really lived and historical characters such as Bonaparte and the Prince Regent. People who were there at the time who our fictitious characters meet and are influenced by. Bill is excellent at writing verse and has come up with some absolutely terrific lyrics that are absolutely delightful to me. And also he has had a couple of visionary moments where he has gotten up out of a sound sleep and has entire pages of dialogue that he has written word for word from his dreams. There are three of those in the book and they are some of the most wonderfully written parts of the book. For humor and sex and adventure and quite a bit of human profundity. The characters are attached in a family and that family is very important. And love is very important. It isn’t a sexual romp and it is not a romantic novel. There is romance in it but is not geared just to that genre at all.

Soaps.com: How long have you been married?

Susan: 37 1/2 years. I think you will find as you go along it only gets better, and Billy is still a mystery to me. He still comes up with things I have never imagined, words I have never heard him use. Experiences he has never described and I continue to be fascinated and inspired by him.

Soaps.com: Do you have a new project in the works yet?

Bill: Well, the publishers would like us to do a sequel. So we may do that.

Soaps.com: Will you be returning to “Days” anytime soon?

Susan: I have no idea. We just went to Chicago with a “Days of our Lives” contingent to do a book signing for a few days. We travel all over the United States for “Days” in the last year. We have been in Denver, Atlanta, Cleveland, Cincinnati. We have been out there, plugging the show. I am now at this moment the person who has been on the show the longest. I started “Days” in 1968.

Bill: Susan started November 1968 and I started February 1970. And we didn’t work together until April of that year, but when we started working together, Bill Bell who was the head writer, saw something going between our eyes that was electric and he started to write for it, and he wrote the most wonderful plotlines for us. It was thrilling. You couldn’t wait to open the script. It was so much fun.

Susan: We were written as lovers before we became lovers in life. And we were the first couple, and only soap opera couple to appear on the cover of Time Magazine. We were considered the first Super Couple.

Soaps.com: What do you want your fans to know about the book?

Susan: We are terribly proud of it. It is a very good read. It is fun and colorful and it has become so much of our lives. We are happy to be sharing it.

Bill: It is about a 16-year old girl and we watch her go from an adolescent way of looking at life to a mature woman looking at life. There are aspects that are romance, aspects that are adventure. We read over 100 books about the Regency period. We really studied. We went to London where most of it happened and walked the streets until we found the places where the characters lived.

Susan: We visited the library of the London Museum of Theatre to do research there and we thought we would spend a couple of hours, and spent the entire day handling playbills and reviews from 1803 and 1806. It was fascinating.

Read about one of the latest returns, Dr. Daniel, at Interview with Shawn Christian.