Ex-Days of our Lives’ Jay Kenneth Johnson In Undercover Bridesmaid 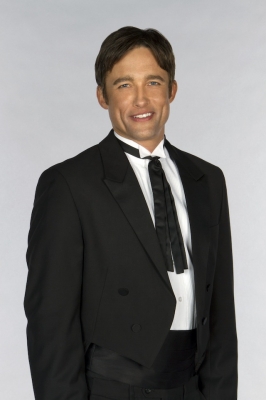 Fans of former “DOOL” star Jay Kenneth Johnson (ex-Philip) will be able to see him next month. The actor will be hitting Primetime as the womanizing star of the new Hallmark Channel original movie, “Undercover Bridesmaid.”

Brooke Burns (“Melrose Place”) headlines the cast of the comedy as the bodyguard for a Texas tycoon’s daughter as she tries to make it to her wedding. Johnson plays the would-be groom with a wandering eye who, along with the rest of the wedding party, proves to be as much of a nightmare as the bratty bride. The cast also features Nicole Paggi (“Hope & Faith”), Gregory Harrison (“One Tree Hill”) Martha Madison (ex-Belle, “DOOL”) and Justin Baldoni (“The Bold and the Beautiful”).

“Undercover Bridesmaid” will premiere on Sunday April 15 at 8:00 PM EST on the Hallmark Channel.

Read the Interview with Lisa Rinna to find out what Kate’s other children are up to.