Eve Plumb Talks to Soaps.com About Her Role on Days! 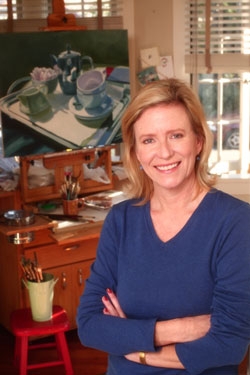 She may be best known for her role as Jan on “The Brady Bunch”, but that’s just one entry on a very lengthy resume. Adding one more role to her over four decades long career, Eve Plumb drops by Salem on August 29th, as Dora, a woman who has a breakdown and seeks out Marlena’s sage advice.

Aside from this guest starring role on Days, Eve has kept busy over the years appearing in episodes of “Wonder Woman”, “The Love Boat”, “Murder She Wrote”, “The Facts of Life”, “Lois and Clark: The New Adventures of Superman”, “That ‘70’s Show,” “Fudge” and even a brief stint as June on All My Children. Eve has also appeared in the movies, “I’m Gonna Git You Sucka”, “Nowhere” and “Breast Men”, as well as the many fabulously fun Brady Bunch TV movies and spin off series.

While these days Eve spends most of her time painting, she took some time to share her Days of Our Lives experience with Soaps.com.

Lori Wilson: How did your role on Days of Our Lives come about?

Eve Plumb: I auditioned for the casting director, who called me back to read for the producer. Very old school, a lot of fun for me.

Lori: Were you a fan of Days before you landed the part?

Eve: Days of Our Lives is such a venerated show, and it was great to get to be there for a little while.

Lori: We know your character has a breakdown and seeks help from Marlena.What else can you tell us about Dora?

Eve: She is really at a crossroads in her life, where everything seems to be going wrong. She’s overwhelmed by her situation and her emotions.

Lori: Is this a one-time thing, or will Dora be a recurring character?

Eve: As far as I know, it’s a one-time thing, but it would be fun to be recurring.

Lori: How did you enjoy working with Deidre Hall?

Eve: I liked it very much. Deidre is a committed professional who really cares about the script and the show and making it right.

Lori: Do you share scenes with any other members of the cast?

Eve: My scenes were only in Deidre's doctor office.

Lori: Were you surprised by the fast pace of daytime, or did your role on All My Children in 2003 prepare you for it?

Eve: The experience was very similar to AMC, since the format is the same. There is no slacking in soap work, you have to be on your game at all times.

Lori: Is there anything memorable you can share from your taping of scenes on the Days set?

Eve: I was only there for a half day, really, but it is a comfortable atmosphere and a supportive one as well.

Lori: Would you consider a full time gig on a soap?

Eve: Yes I would, though it is the hardest job in show business as far as I'm concerned. A lot of dialogue every day, plus you have to be glamorous at the same time!

Lori: Aside from your stint on Days, are you working on any other projects?

Eve: I've been painting, still life oils on canvas. It's taken a long time, but now I have several galleries. I have a show in Scottsdale in October at The Bonner David Gallery. I'm currently painting pieces for that show, and for others around the country. Hey - my website is www.eveplumb.tv, so you can check it out.

Soaps.com would like to congratulate Eve on her success as a painter and we look forward to watching her turn as Marlena’s troubled patient. Tune tomorrow to catch it!