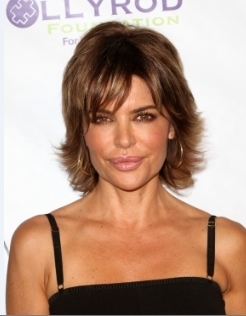 “She will absolutely have her spunk and her fire.”

Billie Reed is back, and Salem won’t be the same once Lisa Rinna brings her spitfire performance back to the free-spirited character, one she last played in 2003 and originated 20 years before that in 1992. Since her last appearance on “DOOL”, Lisa has released two books, won “Dancing With the Stars” and had her own reality series, “Harry Loves Lisa” with husband Harry Hamlin. Not to mention her successful series of workout videos.

But now Lisa is making her Daytime return on March 8, and according to her, we have Patrick Muldoon (Austin) to thank for it. “I had seen Patrick about a year ago,” she says. “And he’s one of the reasons why I decided to go back to the show. He kind of put the bug in my ear when he told me he was going back. And I thought, ‘Oh, that could be fun. That could be an interesting thing. But it really started with Muldoon. It’s all because of Muldoon. Let’s put all the blame on Muldoon.”

Lisa is keeping mum about the reason she comes back to Salem “I do come back to do something with my mother, that I can tell you,” she says. But co-star Shawn Christian (Daniel Jonas) let slip in an interview that she is involved in a crime. So is Countess Wilhelmina Cosmetics involved? “She’s the one who started it,” Lisa says. “And, you know, we’ll see how that plays out. You know, I love not knowing. I have no idea what they have in store for Billie and it’s sort of like life. We don’t really know what’s going to happen from day to day. It’s very unknown and it’s kind of exciting I think, that way.”

What she will say is that you can expect to see her on the canvas for more than a brief stay. Certainly long enough to get into some trouble. “You know, I don’t know if I can talk about it exactly,” she says. “But I think it’s going to be longer. As long as we’re all having fun we’re going to keep doing it. We’ll see.”

She says she will be certainly coming back with some secrets, and there will be no romance with Bo (“I have a child with Bo, obviously, but we are in a platonic relationship.”), but to not count out one with Dr. Daniel – despite his romance with her mother and daughter.

“Feelings are very powerful and I think complete conflict would definitely be in the mix,” she says. “But again, when you’re passionate about somebody it can override many, many things. I love that there’s that kind of huge obstacle. I love that it’s never easy in a soap. Certainly, it’s either going to be the person I hate and that hates me. Or somebody that has major obstacles to overcome, and that’s what we love about soaps, isn’t it?”

Another thing she isn’t counting out is the hopes of Billie singing again. “It would certainly be fun,” she says. “It would make me go to my voice coach and start training. As we all know, Billie first started on the show so yes, it would be fun. I would like that.”

Lisa answers even more of our questions below.

Soaps.com: Why do you think “DOOL” continues to captivate viewers?

Lisa: I think it’s great story and great characters and it’s generational. You know, it’s something that you can share with your family. Everybody can watch it and it brings families together and keeps them together. I think it’s just good story telling.

Soaps.com: Did you find that there were a lot of challenges and what specifically would be your biggest in returning to the show?

Lisa: So I think for me it’s like riding a bike. Once you’ve played a character and done that, it is like getting back on a bike and riding. But I will say that the whole format’s changed and it’s very much like live theater now. It’s very fast and you have to get out there and you have to know your lines and you have to really be prepared because it really goes quickly. And there’s no time, there’s no retakes. I like that very much too because I really enjoy doing live television and I like live theater and I like live anything. So not only do I love being able to be back acting, I get to do it in a way that sort of combines everything I’ve done over the last six or seven years. And I just – I’m loving it. I’m just loving every second of it.

Lisa: Oh very much so, both of them. You know, they’re family to me even though they’re my TV family. And Lauren (Koslow, Kate) could never be my mother in real life because she’s not old enough to be my mom. And that’s really special to have. Especially I haven’t seen Lauren probably in ten years.

Soaps.com: Since soaps were often like a training ground for actors to get their experience, what do you think of the opportunities now in a world with less soap operas than years past?

Lisa: Thank God they’re still here. I think it is a wonderful training ground. Certainly it’s where I got all my training. You know, the reality world has certainly taken up a big space. But I’ve got to tell you, the actors that I am working with right now on this show are so talented. These young kids, they are so talented it blows my mind. I mean, the talent on this show is like none other. And these people just continue to just hit the ball out of the park. And it’s so much fun for me to work with such good actors. I come home and I tell Harry probably nightly … these kids are unreal.

Soaps.com: Can you still expect Billie to be the spitfire that she was?

Lisa.com: Billie’s a great character. They’ve never killed her off. Obviously they’ve had three different actresses play her. So I think there’s a lot of value in that family and Billie as a character. And she will absolutely have her spunk and her fire. So she definitely didn’t lose that, nor did I. I still have mine. So I guess I bring that definitely. But again, she’s matured and she’s in a different place in her life right now. So I think what you’ll find interesting and what I find interesting is some tables have turned and some roles have kind of shifted between some of the characters. So maybe where Austin – being my big brother – used to take care of me, I may be taking more care of him and even more care of my mother right now. Which that’s a role reversal which I think’s an interesting road to take. She’s one of those great characters. There’s just never a dull moment. There’s always something going on. I mean, she’s that underdog, she’s that fighter, she’s that survivor. She messes up and you want to root for her and you want to help her. She’s just one of those great, great characters. It gets under your skin and, you know, one of the reasons why I wanted to go back and play her again is there’s so many places to take her.

Before her return to Daytime, catch Lisa on “Watch What Happens Live” on Bravo, March 6.

Read what Dr. Daniel said about Lisa’s return at Interview with Shawn Christian.