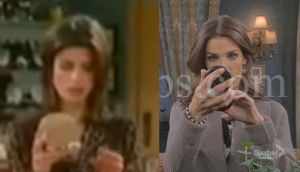 Deconstructing “DOOL” for the week of February 27 – March 2:

This week, the storylines continued to be recycled from the 1990s. We wandered back to Green Mountain Lodge, took a trip to Alamainia, saw a few favourite characters return, and a learned Nicole’s pregnant with a miracle baby. Let’s break things down.

Miracle pregnancy.
In classic soap opera fashion, Nic Nic learned she is pregnant after having a fainting spell. Have you ever known anyone this happened to in real life? Didn’t she learn from Sami’s mistake with Grace not to hide a pregnancy from a DiMera? He’ll only try to get custody once he finds out. Also, if Nicole’s pregnant after being told it’s impossible, does that mean we get Doc Baker back with the news that her first child with EJ never really died at birth? Hey – a girl can hope. I digress. She does have a sister in Taylor, and Chloe and Brady as friends, so it’s ridiculous of her not to turn to anyone but that’s typical ‘Nicole’ fashion, wanting to ‘go it alone’. It’d be a better storyline for me if she did turn to a friend instead of another man, especially since Daniel loves himself a damsel in distress, especially if the damsel’s a patient. Whether they are friends or not I have said in the past that I see loads of chemistry with them and their scenes are always fun, but does this mean they need to date? Not that I don’t want them to but Dannifer is barely cold and some time for these two to repair their lives after a break-up would be healthy. History tells me these two will be a couple within a few months unless he’s paired up with Billie or unless Nic forgives EJ.

Find out lots of great teasers from Shawn Christian’s interview with Soaps.com. He dishes: “She is involved in a crime story I think, and he provides a shoulder for her to lean on. And someone to listen to. And where it brews from there, I don’t know, but like I said before, I am sure there is trouble somewhere. She punches me.” Then read Lisa Rinna’s interview where she tells us there’ll be no romance between Billie and Bo.

Rock bottom?
Another similar story with a woman getting help from a man. Sami’s old pal and ex-hubby Lucas returned. They’re going to be bedding down but how long will Lucas be able to stand her, what with her focusing on number one so much? It was no surprise that she didn’t see the signs that her son is gay. She didn’t even notice Allie existed after Syd was born. Lately, she seems to be written as the Sami of the early 90s which is a huge step backward. Hitting rock bottom usually changes people but she had already changed so what comes next and which man will Sami wind up with?

Musical beds.
McPherson, Thomas and Corday don’t have to cater to each fanbase, nor should they. All that does is dilute the story and make everyone crazy, whether you’re part of a fanbase or not. Sami was married to Rafe, then screwed around with EJ, and soon will take Lucas to bed. All that’s left is for her to get into Austin’s pants in what feels like the writers grasping at straws, trying to bring each fanbase a little crumb. There’s simply no reason to invest in a couple anymore is there? Do you invest in DOOL couples? Vote.

Sir Ian.
I found it difficult to believe he would use the words 'hot mess'. I just don’t think a man of his stature would use a ridiculous and trendy phrase, one that hasn’t really been used in two years.

Wait…Abe was funny?
Abe should always get drunk. I’d have loved to see a longer scene with him drunk, and showing some emotion the way he did. It actually made me feel something, for him that I haven’t felt in years, literally. It showed he’s human. Maybe I understand why he and Lexi are being broken up. Whether or not they get back together, this could mean better writing for Abe, who can finally gain some other interesting traits other than a good moral foundation.

HoJo:
In Alamainia, Hope preened with powdering the non-existent shine on her nose and using a bargain-basement version of Princess Gina’s as-big-as-her-head lovely silver compact while John tried to escape and get to his ISA buddies where they’d… I don’t know. Go bowling? Why is he back with these guys and where were they when he was in jail? Why did Stefano (you know it was him!) kill Walsh? And how did they get his dead body from the café to the hotel unseen?

Be sure to read SOF's Matt's DOOL Musings. A taste, "She told Ian how much she was smitten with another man who could give her all she wanted and expected this to win him over into granting her a divorce."

He’s back! Dustin Cushman, ex-owner of SoapOperaFan.com is back posting Dustin’s "DOOL" thoughts. He has a lot to say in his return. A taste: "Meanwhile we also have Abby, aka Sami 2.0, going after Austin."

Psst. The Daytime Emmy Pre-noms are in.