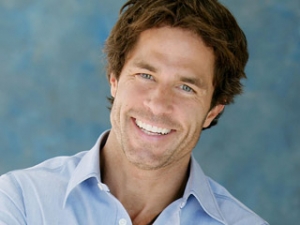 “If I am in a scene with a female, you can guarantee there will be trouble.”

Dr. Daniel Jonas is back in Salem and actor Shawn Christian filled us in on the surgeon’s time away to clear his head and possible love interests now that he is back.

Soaps.com: What kind of direction are they going to take your character now that you are back?

Shawn: That’s a good question. I think expect the unexpected with him because it is not a linear ride, ever. Even with the scripts that seem to be coming, they seem to bounce around from one aspect of his personality to the other. So I don’t know, but I am excited about it.

Soaps.com: How has the disease changed Daniel as a person.

Shawn: It brings some humility I think, with the perspective of a surgeon and an adrenaline junkie like Daniel is in general, it brings you back down to Earth and grounds you. Those moments when the thing you worked for your whole life is taken out from underneath you. And surgeons really run at a high level. And I think for Daniel, he thrives on life or death situations. It is like a life force for him. So even if it is danger in his whole personal life, it is probably why he finds himself in so many precarious situations. But it just brought him back down to Earth a little bit.

Soaps.com: Will Daniel be working as a doctor now that he is back in Salem?

Shawn: Absolutely I do, as a consultant. I am not doing any surgery, but I consult. The hand may be weakened but the mind still thrives. And the hand, it is not as if it is addressed completely, but the back story is that he has traveled the world and explored some alternative healing methods and occasionally I will massage it as a form of showing this is something he went through, one of his demons, but we are not really addressing it in the story line but I try to stay true to some of the history of his character.

Soaps.com: Where did you go while you were gone? Just traveling the world?

Shawn: Yeah, when I was introduced to the show I had been traveling the world, sort of like a Doctor’s without Borders, doing things where I can, when I can. And I think that is how he loses himself when he has a traumatic experience. He goes back to giving and helping and takes the focus off himself. And he surfs, probably a lot of extreme sports to get that same adrenaline that surgery gave him. He asked himself a lot of hard questions. I am not sure he found all the answers yet.

Soaps.com: Now that he is back he seems to be helping Nicole (Arianne Zucker) with her pregnancy – is there going to be any romance between those two?

Shawn: I honestly don’t know what is planned. With Daniel, I am sure there is trouble brewing somewhere. If I am in a scene with a female, you can guarantee there will be trouble.

Soaps.com: Billie (Lisa Rinna) is coming back, so what about you and her? Even though you have been involved with her mom and daughter.

Shawn: That is just loaded with history and a prickly road, which they address. The character calls Daniel out on that. However, I didn’t sleep with her daughter. It is enough to freak her out. So we tap dance around that. And I don’t know where they are going with it to be honest with you. She is involved in a crime story I think, and he provides a shoulder for her to lean on. And someone to listen to. And where it brews from there, I don’t know, but like I said before, I am sure there is trouble somewhere. She punches me.

Soaps.com: So are we going to find out who your dad is with Maggie being your mom?

Shawn: I saw John Aniston and Suzanne Rogers in the makeup room the other day and was like “Mom, Dad – wait, you aren’t my dad that I know of.” And John betrays nothing. So, it is one of those lingering questions out there and I don’t know if anybody specifically knows yet, but I do like that is has remained a mystery. They left that out there which I like because that means there is always something else to search for.

Soaps.com: How did the Jennifer (Melissa Reeves) triangle change Daniel?

Shawn: He found probably one of the purest human beings he has ever know, that I am aware of. But I do think thins woman was one of the sweetest, purest, kindest, gentlest people he has met, who was meant to do the right thing. And he wanted to give her that space to make the choices she wanted to make. It was a very mature romance for Daniel. Not riddled with deceit and lying and cheating. He was not willing to put the value of family that has been together forever to the test and said if she was meant to be with her family, I do wish you well. If not, then let’s go for a rise. And I think in her heart, she knew she had to do whatever she had to do for her family, even though her kids are grown, and it is one of those choices people make every day, and she chose family rather than building a new life.

Soaps.com: How have you enjoyed your time on “Venice the Series”?

Shawn: I have fun because I can get away with a lot of sh*t. I really do. I love that kind of being off the set, that kind of film making. For me, verbally, I feel like sometimes I get away with something on the show. Are they going to edit it out, I am not sure. But they didn’t say I couldn’t say it. Hillary B. Smith is just fantastic and Crystal (Chappell) has put together her pride and joy and I am so happy to contribute to somebody who has a passion for something. I’ll paint a little corner of your show, put me in wherever you see fit and let me help you paint your wonderful picture here. I enjoy it.

Soaps.com: Will you be returning for Season 4?

Shawn: If I am asked. I had dinner with Crystal a couple of weeks ago and I hope it all works out.

Soaps.com: Is there anything else you would like to say about Daniel’s return?

Shawn: Yes. If you know something, let me know. Daniel is back with more mystery and mayhem.

Soaps.com: A lot of people are glad to see you back.

Shawn: It’s nice to know I have gotten this kind of response. I thought I would just fly under the radar and sneak out and nobody would know.

Daniel isn’t the only character with some mystery. Read our Interview with Patrick Muldoon to see what he thinks about Abby’s obsession.