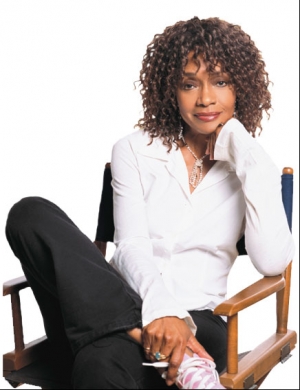 She likes to insert herself into people’s lives.

With an impressive resume that includes a role in the Oscar-winning film (“Crash”), a lead role opposite Richard Pryor (“Moving”) and acting credits alongside the absolute who’s who of Hollywood (Diane Keaton, Whoopi Goldberg, Don Cheadle, Morgan Freeman, Sidney Poitier), Beverly Todd is moving into Salem April 2 as psychic Celeste. She spoke with us about all the trouble we can expect her to cause when she breezes into town.

Soaps.com: Everyone is very excited for your arrival in Salem and wondering what Celeste has been doing since she left town.

Beverly: Well, Celeste has been traveling and doing Celeste. Being very grand and elegant and shopping and all of the frivolous stuff that she likes to do. Pretty much staying out of trouble. Or, maybe it is just that no one has caught her getting in trouble.

Soaps.com: So why is she coming back to town?

Soaps.com: Will she be helping people with her psychic abilities while she is in town?

Beverly: Well, helping is a very nice way to put it. She is going to be butting in. Help as far as she is concerned, a pain in the butt to everybody else. Where she goes, those cards go and people are like, “Oh no, here she is with those damn cards.”

Soaps.com: Is she going to be coming back with any secrets?

Beverly: Well, if I told you that it wouldn’t be a secret. I will say, it is going to be a very dramatic storyline and I love it because as an actor you want to have something to get your teeth into and just chomp on it. It is going to be fun and exciting and dramatic.

Soaps.com: We understand Schuyler Yancey is coming to town. Is he coming back to play your son?

Beverly: Yes. I think it is okay to say he is coming back to play my son and a handsome son too, isn’t he? Gorgeous. I have to tell you mama drooled a little bit.

Soaps.com: Is he going to have the same kind of ability that you have?

Beverly: I don’t know. All of that hasn’t been revealed yet. I don’t think so.

Soaps.com: What is his name?

Soaps.com: Do we know who his father is?

Beverly: We will find out.

Soaps.com: You have had quite an amazing career working with some great people. Any favorites?

Beverly: You know, when you look at the lineup of people I have been fortunate enough to work with, I can’t say my favorite. I do have to cite one, because he was the one who gave me my start in films, Sydney Poitier. He was my mentor at the very beginning of my career, so I think because he was the one who got me started in this business and on a very high level being with him – you can’t start any higher than Sydney Poitier, I have to say he was.

Soaps.com: Is this your first soap opera?

Beverly: No. I did a soap opera a thousand years ago when I first started out in the business in New York. I was trying to think of the name of it, “One Life to Live” I think. Of course it has changed tremendously from the time I first started. I was a lot younger and words stayed in my memory much easier. Now I have to work and learn and study lines. But it was not any new terrain I was entering into.

Soaps.com: Anything else you would like to say about Celeste’s return?

Beverly: I think Celeste is full of fire and spit balls and excitement, and this promises to be the same Celeste returning, so look out.

Days of our Lives Weekly Spoiler Video: Facing Up