Soaps.com Catches Up with Arianne Zucker From Days of our Lives! 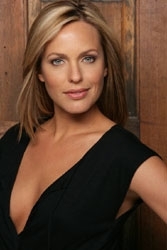 When Arianne Zucker first came back to Days of our Lives to reprise her role of Nicole Walker Kirakis, the character was still shallow, materialistic and self-absorbed. Several months later, Zucker has shown viewers that all was not what it seemed, as her latest incarnation of Nicole has a depth we’ve not seen before.

I recently spoke to Arianne about her return to Days, as well as another project she worked on, and she enthusiastically told me, “I’m having so much fun! I’ve been so busy, I don’t think I’ve worked this much before.”

Taking two years off in between stints as Nicole, Arianne took the time to fine tune her craft by taking a scene study improv class. “Going into that class for two years and learning so many new things and coming back to the show on Days has made such a tremendous difference in my work and how comfortable I am and being able to take the character from one place to another. It’s sort of a dream come true,” she stated. “I’ve had such a great time since I’ve been back. I do feel like I’ve been gone for a while because I’m a different person and the character has changed.”

Her time in the class seems to have paid off, as the actress is front and center going head to head with Days leading man James Scott (EJ) and perennial soap favorite Roscoe Born (Trent). Since Born is one of my favorites, I had to ask what it was like to work with him. Arianne, replied, “Isn’t he good? And he’s the nicest guy on the planet. It’s so refreshing to work with someone that evil and he does it in such a slight way that it’s creepy, but in a good way. He’s intending to do that and he’s so good a it and I feel very fortunate to work with him.”

As for Scott, Arianne couldn’t be more pleased to work with the charming Brit as well. “I love working with James. He’s so great. We work a lot together on our stuff, we’ll come in early or work on stage quite a bit, now that the fans like the two of us together, just to create something more every time we have scenes together.”

While Zucker gushed about the wonderful cast she’s lucky enough to work with, she admitted her favorite scene partner has been Tamara Braun (Ava). “She always gave me so much, just as a woman, as an actress, everything. Such a wonderful person all around. She did so much with that character. She could have easily played that character into a wall and she didn’t. She did such a good job with it.”

Recently, Days of our Lives took some time out of their normal storytelling to give the audience a 1940’s film noir treat. Having starred in a play with a similar style at James Reynolds’ (Abe) theater, Zucker was comfortable with the dialect and expressed what a wonderful time she had doing those scenes. “With the film noir I’ve been given a slightly added enjoyment to my day because every day is kind of a challenge. It gives me the ability to try and do something extra.”

Aside from rediscovering so much success and contentment on Days, Arianne also filmed a pilot for a web series, entitled, “Life in General.” Written by Karen Harris (current writer for General Hospital, and former writer for "GH: Night Shift", "Port Charles" and All My Children) “Life in General” is a behind the scenes look at the day-to-day antics of a soap opera. Zucker plays the head writer who must try to keep it all together by dealing with everyone from the producers to the actors. Giving the experience high praise, Arianne said, “It’s hysterical and it was so well written and it was so much fun to do.”

Describing it as not quite a parody of soaps, but with a feel of all the chaos involved “punched up soap opera style”, “Life in General” also stars fellow soap actors, Lindze Leatherman (ex-Georgie, GH), Scott Clifton (ex-Dillon, GH), and John Ingle (Edward, GH; ex-Mickey, Days), as well as accomplished actress, JoBeth Williams whom Arianne couldn’t have been more pleased to work with. “Of course one of my favorite movies was “Poltergeist” growing up and [JoBeth] is lovely and such a hoot. What a funny woman,” she enthused.

“Life in General” is a Strike.Tv production, which was conceived as a place for writers to put their projects up during the writer’s strike earlier this year. A pilot has been shot, but currently viewers can only watch a behind-the-scenes clip of the show. If it gets enough hits, “Life in General” will be picked up and they will continue to shoot one episode a month. To help describe the process web shows must go through, Zucker explained, “It’s almost like you’re going into a room and pitching and hoping that millions of people hit your website rather than just one executive producer or studio saying, ‘Okay we’ll take your show.’”

To check out the behind the scenes clip of “Life in General” (and to help it get picked up), go to Strike.Tv on Vimeo.com. I can tell you that the show looks like a lot of fun and daytime lovers will definitely appreciate the soap-within-a-soap.

While Arianne waits for word on the future of “Life in General”, she’ll continue to enthrall her audience by peeling back the layers of Nicole’s so called tough exterior on Days. Soaps.com is certainly enjoying the ride Arianne is taking us on with the new, and dare we say improved Nicole and can’t wait to see what happens next!

Ross Matthews Back to Days of our...