Ross Matthews Back to Days of our Lives! (Updated) 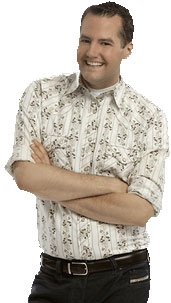 Soaps.com has learned that Ross Matthews will appear on another episode of Days of Our Lives as Sami’s workout buddy Chris. As Matthews reported on his blog, he had a lot of dialogue and “It went super well!”

The former “Tonight Show” intern, Matthews guest starred on the May 14 episode of Days where Sami asked him to spy on Nicole and EJ in the sauna. Matthews didn’t say what his character is up to this time around or even the exact date his episode will air, but he stated he doesn’t think this is the last time we will see Chris!

Time will tell on that one, but in the meantime, since he recently shot the scene, you can probably expect to see Matthews on the soap in the next month or so. (Update: Chris will return as Kate’s assistant this time. Catch him Tuesday September 9!)

Soaps.com congratulates Ross on his latest trip to Salem and look forward to seeing what kind of fun he’ll get into this time!

Soaps.com Catches Up with Arianne...