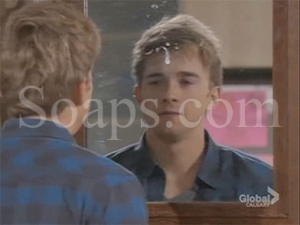 Deconstructing “DOOL” for the week of January 23-27:

All I want to do is rave about my new favourite non-couple, Welvis, but there’s so much more to gossip about such as how Salem’s finest who are supposed to lead by example yet have no problems illegally opening a safe deposit box, or how trained psychiatrist Marlena’s suddenly like a bulldog with a bone when it comes to digging for information, more importantly, how much of a fail that purple lipstick was that was used on my Nic Nic, and how she actually thinks she can best EJ, why only Bo Brady would bring a practice target [trash] outside of a gun range, and how Lexi singing “Honest Abe’s” praises is going to come back and bite her on the bottom. Back to Welvis.

Welvis is the star of the show.
Will was meant to be on the sly side. It’s something I’ve wanted to see for a few years. It’s fun for EJ to have a protégé and the scenes have been so much fun that I’ve almost forgotten that EJ’s blackmailing Will. I blame fantastic acting and storytelling.

Will spitting at his image was both heartbreaking and disgusting. Yep, disgusting, because it angers me that anyone could hate themselves for something so natural. I’m sure Lucas and Sami wouldn’t care if he is gay or not. I’m quite sure nobody in his family would care but William feels so tortured that likely the longer this goes on, the worse he feels.

Lack of real motivation.
In an interview Galen Gering did with SOD, GG reveals Rafe’s reasoning behind his infatuation with Carrie. Apparently, Rafe felt inadequate after losing his job and when he finally got one, “Sami started harping on him because the job was with her sister. Rafe feels like he’s always being evaluated by Sami.” Um…okay? This isn’t what I’ve seen. A woman voicing her opinion over her jobless husband is not a harpy. Excuse me for saying so and all but Rafe’s a whiny little bitch if he feels that way considering Sami has barely said boo about his job with her sister. She’s been outrageously easy going about him working with Carrie for Sami. She didn’t even really get hot under the collar when Rafe was working for free instead of using that time looking for a paying job. She has every right to voice her displeasure but it seems to me that she has bitten her tongue more times than not. If she wasn’t so filled with guilt over her grief sex, she might have actually ‘harped’. I’m not discounting that Rafe is feeling inadequate but the story I’m watching hasn’t unfolded quite this way. He really needs to get a handle on this infatuation with Carrie and cut off all ties with her if he wants to stay married to Sami.

The mole hires a mole?
Could Madison have gotten the idea to have Sami become a mole from being a spy herself at Basic Black? Could Madison be the one who screwed John over? If so, she’s going to hurt Brady far more than I anticipated, which means I may dislike her and her methods even more. She hinted that she’s doing this to get back at Kate. I gather the person pulling Madi's strings knows Kate. What did Madi mean when she said she had "other plans for Mr. Quinn Hudson." Did she simply mean she’s going to rip him from Kate’s company too, or is there more to it?

Espionage is a no no?
Is Rafe being a hypocrite with Sami? Seems like a case of selective memory considering he helped Sami cover up a murder attempt. Then again, maybe he has gotten back in touch with his law-abiding side since working with Carrie. Sami of course is being true to Sami, keeping secrets and making decisions without her husband in mind, and then when Rafe disagrees with her decisions, she responds with anger. Classic Sami line: "You don't get to question me when I do what my boss tells me what to do." I disagree. She shouldn’t blindly do what her boss tells her, especially when it’s against the law. Once all is said and done, how is Sami going to respect herself or her boss? How is she to trust Madison won’t one day screw her over? I think Sami’s getting over her head and doesn’t know the half of the story.

Madi has no qualms about using anyone.
The scene with Madi and Quinn trying to get Abby and Mel to work things out was forced, and was in poor taste. I'd have liked to see Melanie tell Abby that her attraction to Chad is not undying love and that neither went after the other. Since nothing unforgivable has happened and Melanie ditched Chad for Abby, these two should be able to make up soon.

Aubigail:
Matt has nicknamed them Aubifail. Abby’s a woman obsessed. We seem to be recycling the Sami and Austin obsession storyline from the 80s. Next thing you know, Abby will have sex with Lucas, drug Austin and pretend they had sex and that she’s pregnant with his child!

All things considered, it was a pretty decent week. EJ and Nicole were comical, choosing to poke fun at her past as a kidnapper; EJ deciding to have a party for Sydney because he was shut out of Sami’s party was expected and quite funny that Will was in on it, and the PTSD survivors group scene was really well done and a fine salute to veterans. I’d like to have seen Philip a part of it.

There were some unconventional scenes this week. Vote on the most bizarre scene of the week with our Days of our Lives poll.

Be sure to read SOF's Matt's DOOL Musings. A taste: "Kayla, who has been making ends meet by working as an Ellen Degeneres impersonator, dropped by to laugh at them..."