Days Of Our Lives Weekly Blog 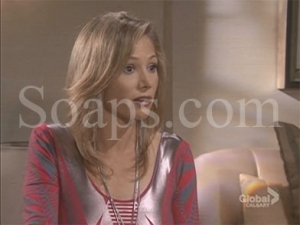 Deconstructing “DOOL” for the week of January 16-20:

We had a few big reveals this week. We learned Abby’s fantasies make us queasy, Sami’s a mole, Madison has hideous taste in dresses, and Daniel’s leaving Salem for a while. The big concern for me was John feeding Marlena no name cereal. Should we be worried that there was no product placement? Maybe, but for now let’s worry about the clothes on John’s back and other trivialities.

Less is more.
Sure it’s superficial but I know you’ll understand… I cannot tell you how much I dislike John’s ‘mock turtle neck’ shirt and cheap jeans. Get him into a suit and into the office. And please, enough with his trademark catch phrase which is used altogether too often this time around. “That’s a fact.” Less is more.

The mole.
Sami’s ego has been stroked begrudgingly for the better part of the week by Kate. It’s almost a shame that Sami’s taking Kate for a ride considering they seem to work together so well. I’m not much of a fan of a newcomer besting my Kate. Sure, some will argue that Kate never gets comeuppance but that’s the beauty of a villainess in soaps. The moment they do, they lose their edge and who wants to see a kind villainess? We’ve got a Carrie Brady already. Bleh. I can’t even use that line anymore. All in all, the story is well executed though Madison’s scheme seems a little tame for a Salemite, so I’ll assume there’s much more going on than meets the eye.

Best line comes from Sami and Marlena debating Sami’s mothering skills. Sami reminded Marlena, “You’ve been telling me to get a job since I was sixteen and now I have one.” Enough said.

Hiring out.
I don’t know whether to poke fun of them or applaud them. Abe wanted Bo and Hope to crack down on crime. He didn’t say so but the words ‘for once’ lingered on his tongue. Or maybe that was my tongue. Bo decided the best way to do that was to hire out. He went to Rafe, the cop Roman fired a few weeks ago. Hrm.

Chelanie:
Seemingly homeless Chad doesn’t give a toss about how Abby feels about him dating Melanie, he just wants some ‘o’ Mel. I understand his impetuous nature but feel he should give Melanie more time to win Abby back before they turn on the heat. Also, jumping from one relationship to another is never a good idea. Some time alone wouldn’t be a bad idea but it looks as though Melanie just told him to take a hike. Mel's loss is Gabi's gain?

Playing the friend angle.
Thirty-year old Quinn, who has the hots for barely legal Melanie, let her vent to him about Abby and Chad and gave her the best advice I’ve ever heard, "You see sometimes things… they either work out or they don’t." You don’t say. If Quinn really likes Melanie, he should be careful not to get stuck in the ‘friend zone’. Then again, maybe it's best. What do these two really have in common?

The heat is on.
I do believe I’m a Welvis fan. Will and EJ (Welvis) fans are dishing about the blatant sexual overtones between this non-couple, sort of hoping there could be something going on there. Of course there isn’t but it can be fun to speculate and daydream. EJ’s just sensual with everyone he talks to. Thoughts on a Welvis pairing? Vote in the Days of our Lives Poll.

Surf’s up?
Daniel’s leaving town in order to find out if there’s life after being the best surgeon in perhaps the world. He’s going backpacking across Europe or something but he’ll return after the actor is done filming a movie. Since they don’t seem to show the hospital anymore, I gather he’ll start working for Quinn since everyone else does. The timing is perfect to rest the triangle storyline for a while. I do wonder if his return will bring up Victor’s mysterious part in stealing Maggie’s eggs.

Check out Soaps.com's interview with James Reynolds. James dishes on Abe's campaign and his NAACP nom.

SOF's Matt's DOOL Musings A taste: "The poor boy had spent most of the week being treated to Marlena's compassion. Since her mouth can no longer open as wide as Sami's, it all comes out like groaning instead of screaming."