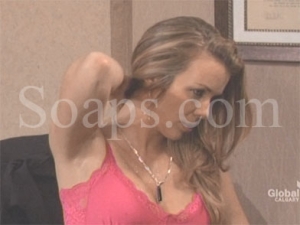 Deconstructing “DOOL” for the week of January 2-6:

This week was like any other with a few great scenes, a few corny moments, and the highlight seemed to be Will’s interactions with EJ. Let’s break it down.

“I own you.”
EJ’s gaydar went off when he saw Will glance appreciatively at Tyler’s big brown eyes on New Year’s Eve. He used this information, along with his knowledge that Will, not Lucas, shot him in the back in 2007. We’ve always thought Will was the culprit! It’s good to finally see this story come to fruition. We’re in for a lot of dramatic moments. Let’s take a look at both sides…

Whether or not EJ deserved to be shot is irrelevant. The point is that Will got away with attempted murder. From EJ’s point of view, valuing his life as he does – except for the time he tried offing himself – why shouldn’t he get payback and blackmail the person who almost ended his life? Sure he’s an opportunistic snake and so on and so forth but I love that the character is being true to himself. This is the EJ that fans fell for. Of course, it’s pretty sick, but not any sicker than faking a child’s death or the many other sordid things he has done. Let’s put it into perspective. He’s a mobster. This is his nature. On the flip side, it’s hard enough for young Will to accept he’s gay but the very first person who knows the truth is someone who uses it against him? Sick. Can you imagine what this will do to the poor guy? Some fans wonder if EJ can truly blackmail Will for the shooting since he has no proof. Good point. Good thing he has more than one thing on young William. Poster “Switzerland,” says, “Shouldn’t/can’t EJ be disbarred for knowingly letting someone serve time for a crime that Will committed? Am I wrong?”

The Master could probably spend some time in the clink for letting that happen. Maybe Will should record their conversations just in case and start getting the dirt on EJ. Then again, EJ is a DiMera and will destroy any proof of wrongdoing as he always does and likely make things even worse for Will. Is there a way out for Will? Does he even want one? He seems to be having a good time in his new role and the new car sure sweetens the deal.

Family acceptance.
Many fans including myself loved the acceptance of Sonny by both his parents, and their easy-going nature. Will liked it as well, which caused many to feel sympathy and affection for Will. I’m not a fan of using Justin and Adrienne just to further Will’s storyline. Will’s questioning was a little over the top. It was good to see something I suspected, that Sonny knew that Will’s gay. It’s good to see at least one gay man’s gaydar works in Salem aside from EJ. I’m not sure if it was alright for Sonny to out Will to Mateo but it came off as a sweet moment.

Sonny’s quite the entrepreneur.
Fans are missing the sets they grew up watching. There is such a thing as too many changes. I’ll miss poking fun at the roach infested Cheatin’ Heart, which is a big part of the history of the show. I’m not sure why they’re getting rid of the bar altogether when we already have Java Café for the University crowd to get caffeinated in. Could the set designers locate Bo and Hope’s house so these two are no longer homeless? Are we still in the dark about where Chad lives?

Bradison.
Another week has passed and these two still don't do much for me, no matter how many couples massages there are. I hope Quinn hosed down the massage table after they soiled it. Gah!

Nicole and Madison's friendliness was the highlight of this scene.

Maggie’s ridiculous suggestion:
Bo as CEO of Titan? Has she been sniffing glue? Smoking crack? Bo can't find his arse with both hands. I want my Philly K back. It's the right time and unbelievable that Victor would make Madison CEO moments after bellowing about how the business he created should stay in the hands of family. It. Wouldn't. Happen. Course, Bo would provide some comic relief if he ran Titan.

Alice's mystery.
I know they're building to finding out who EJ's mum and dad really are but I wouldn't mind if this storyline dropped off the show tomorrow. I dug the one-liner from Jenn about Alice, which says it all. "It's not her." I want to remember Alice as she was, not as somebody completely different.

Cafe:
What can I say about these two? That office scene was so funny! The prancing around the office half-dressed was so unprofessional. Neither had enough brainpower to open a window in the office, bring in fans from home. It didn’t occur to either to forward office calls to their cells and work out of the pub like everyone else in Salem does. Instead, Carrie rubbed her breasts with ice which could undo even the most committed man. I’m not happy that Rafe's into his wife’s sister or that Carrie, after knowing what it’s like being hurt by Sami for going after Austin, is looking at her sister’s hubby like a piece of meat. Nasty! Still, the 80s cheesy mood music, with lyrics such as "feeling the heat," made for good entertainment.

Letting go.
Melanie gave up Chad because of her friendship with Abigail, which was highly dignified, but how long is this going to last and how long is Abigail going to assume the worst? Check out Soaps.com’s Kate Mansi interview. Kate gives Hollie insight into Abby’s thoughts and feelings regarding Austin, Chad and Melanie. After Abby gets over her hurt, do you think Chad and Mel could be together? Is there a code between friends or do you think that if the guy wasn’t right for you, maybe he’s right for your friend? Vote in our Chad and Melanie poll.

Check out SOF's Matt's DOOL Musings. Here's a taste, "Rafe sucked on his pen, recalling that this was all eerily like that fantasy letter he wrote to Penthouse Forum when he was a teenager."

Days of our Lives: Will Shooting EJ....