Days of our Lives: Will Shooting EJ. (Video Included.) 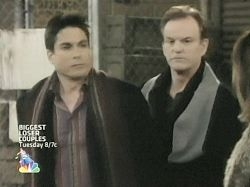 When Elvis finally confronted Young William for literally shooting him in the back, some viewers were perplexed and wrote in asking us what happened. Since even Will can barely remember trying to kill the guy, here’s a reminder.

It was way back in 2007. Earlier in the year, Lucas and Sami had remarried, but that didn’t last because he discovered that Elvis had blackmailed her into sex to save Lucas’ life. This meant that the twins she was carrying could have been EJ’s. A test proved that one of them was. While this made their always rocky relationship difficult, the end of the decades old DiMera-Brady feud demanded that Sami marry Elvis. Will tried to convince his parents to stay together but that failed so he went to Europe. Sami and Lucas got a quick divorce, leaving EJ and Sami to have a quicker wedding. Will returned around this time, still bitter about his parents break-up and getting in trouble with the law. The ceremony didn’t go off as planned though because EJ wound up with a bullet in his back. Lucas took the blame, and went to prison for it, but there was always the hint that Will had been the real shooter. Will immediately left for Europe.

For more from "DOOL" circa 2007, check out Ex-Days of our Lives Rachel Melvin On Stage. Join us on Twitter @soapoperafan and Facebook. Come tweet and Facebook with us about "Days of our Lives," all the other soap operas, "Dirty Soap," "Glee," "Grey’s Anatomy," "Vampire Diaries," and "Venice The Series!"

Days of our Lives Poll: Should Chad...