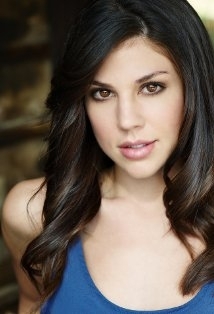 “I think it is pretty clear that Abigail is very reactionary.”

Soaps.com caught up with Kate Mansi (Abigail) about her fight with Melanie, her feelings for Chad and what will happen with Austin.

Soaps.com: Everyone wants to know, how is Abigail feeling right now regarding the breakup with Chad and his feelings for Melanie?

Kate: Today she has a big cat fight with Melanie and calls her a lying sl*t, so I think it is pretty clear that Abigail is very reactionary at this point because she feels so betrayed by both Melanie and Chad who were her best friend and her boyfriend, and I think the breakup was a lot easier for Abigail to swallow when it was mutual. But then knowing they broke up and then she sees him kissing Melanie, it sends her reeling because she feels like she was blindly trusting both of them so much, all the way back until the kiss they shared on Halloween when she thought it was so innocent. So I think she feels like a fool and that everyone is laughing at her because they were having these feelings behind her back. It is like that saying you can’t see the forest for the trees. She can’t see Melanie standing in front of her saying “I’m your best friend, you’re my priority, I never meant to hurt you.” And it is a very adult thing they are asking her to do, to understand that sometimes you develop feelings for some people and you can’t explain why. It is unfortunate it is the situation it is in, but if you have those feelings and they are real then it just happens. She is feeling very possessive of her friendship and her relationship with Chad and that is why she is so betrayed and reacts so harshly.

Soaps.com: Do you think she is overreacting about Melanie and Chad or is she justified?

Kate: I of course think she is justified. Would I act that way? I don’t know. But Abigail has gone through such a whirlwind of people coming into her life and leaving her like her dad did that she feels like she really has to assert herself and assert her feelings here and she feels really that her friend and her boyfriend, or her ex as of a minute ago, acted really disloyally and that can be something that is very painful. So I don’t think she is being over reactive at all.

Soaps.com: What about Austin? Is this bordering on an obsession or is it the usual crush a young girl gets on an older guy?

Kate: She can’t see it. For Abigail it is a real attraction, a real possibility for her to be with him because what initially attracted her to him is the way he is a strong man, he is a good husband, he is loyal, he loves his wife. And what Abigail is just yearning for with every fiber of her being is some consistency and some stability and someone who is not going to leave her like every other man has done in her life. So she has this attraction for Austin and it just continues to grow into something she really has to have, this relationship with him in order to be okay.

Soaps.com: Does Abby think Austin might reciprocate those feelings?

Kate: Patrick Muldoon (Austin Reed) and I talked a lot about this because we wanted to dissect it from all angles and the ironic thing, and the writers were so brilliant here doing this, Abigail would be crazy if he was completely uninterested. But the interesting dichotomy is that he finds himself intrigued by her and it is not necessarily in a romantic or sexual way, but that is what she is thinking of it as. He is thinking of it as something different. He is intrigued by her and I think finding someone attractive is completely acceptable, it is human nature. For Austin, he probably has some of those feelings but it is not like he encourages her. A couple of days ago when she comes to Brady Pub and she says that she was so upset that Melanie and Chad got together and Austin says “Wait a minute, don’t you have feelings for this other guy? You should go for him.” And she completely misreads the signs because in Abby’s mind, she has been so up front about how she feels and he is the one not saying it that when he gives her that green light, she is like, “Oh my gosh, he knows and we are finally on the same page.” When otherwise it has been this guessing game of I have feelings for him, but could he or is he just being a nice guy?

Soaps.com: Do you and Patrick want to see the writers put Austin and Abby together?
Kate: Austin and Carrie have something so special, and the fans just love seeing them together. I have had so much fun working with Patrick and it wasn’t something either one of us was expecting, this storyline, so we are so glad we are able to have the storyline we did have. If they do put us together, or if they pull us apart, that is the way it is. I have just been so happy to have the storyline I have.

Soaps.com: What do you see happening with Abby’s relationship with Jack?

Kate: I think the pain with Jack is never going to go away. He hurt Abigail so deeply it is hard for her to recover from that, as much as she wants to believe her daddy is back and won’t leave, he has been gone for a long time, and during very important years of her life. He has been gone during her transition from a young woman into an adult, and I think she struggles with that as well. She wants to have her dad and sometimes just comes to him crying on his shoulder. And then other times she really feels like she has to assert her independence with him as well because he can’t see her as anything but a little girl so they are both sort of tiptoeing around this new relationship.

Soaps.com: What is your job at the university going to be like?

Kate: I am working for Professor Reed as his student assistant. Abigail tends to dive into all these different jobs and all these different things to busy herself when she is going through something difficult. And she is now a full-time student, doing all these things, and this is just another excuse for her to have a facet to not think about her problems with Chad and Melanie, but it is another way for her to get closer to him and for him to possible see her as more than just little Abby.

Ex-Days of our Lives Rachel Melvin...

TCM Partners On Documentary About Search For Long Lost Orson Welles’ Cut Of ‘The Magnificent Ambersons’; Will Debut On 80th Anniversary In 2022