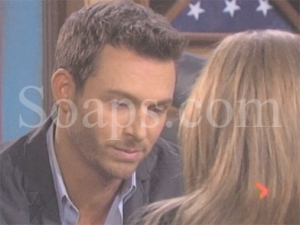 Thomas and McPherson have delivered on establishing romance between the couples, and the characters are finally true to themselves. Still, that essential ingredient that separated “Days of our Lives” from the other shows is missing. The camp, excitement and drama. As Kola Boof tweeted to me, “”DOOL” is so boring…it’s like watching paint dry.”

This week’s inspirational message seemed to be “Don’t take advantage.” With that in mind, let’s break it down.

Dating the boss is never a good idea.
Madison will always have issues dating the boss unless they were partners through and through. Even then they’d have disagreements but would be on even ground. Her fits are getting tiresome. We get that she’s the CEO, but as for running it the way she wants, I don’t think so. Brady owns the company! Why did he bother to pull rank regarding the launch of the men’s line if only to cave moments later? Where was the debate? How on earth is she supposed to respect him or is this part of her plan to get naked with the boss so she can get what she wants? If so, where’s her self-respect and when did Brady become a wuss again?

Most importantly, was she PMSing this week? One minute she’s vehemently against Brady partnering with John and the next, she’s “100% for it.” Does she have a split personality?

And the Alice mystery goes on and on.
This storyline stopped piquing my interest over the holidays. What if the IOU had never been found in the ornament? What if the plaque had never been broken and the key never found? Why on earth did she hide these clues in such precarious items anyway? Why is Stefano being written so tame throughout all of this?

Treason? A set up?
Kate + Sami = good times. I’m torn in so many directions on how this storyline could play out. We all assumed Kate had an alternate motive for hiring Sami. Was it just to have Sami committing industrial espionage – not to minimize but is that just the start? Could Kate be setting Sami up to kill two birds with one stone? Such a tasteless idiom. Kate has always wanted to get rid of Sami, but I thought they shared a crumb of respect between them after Kate warned Sami that EJ was planning on kidnapping the kids a while back. I’m not really sure what Kate would have to gain by hurting Sami right now. She’s not dating Kate’s sons anymore.

On the other hand, and this is highly plausible, Sami could be setting Kate up in order to take over CW or get the company into hot water. I’d prefer it if she’s stuck it to Madison rather than Kate.

Lastly, could Madison be orchestrating the whole thing to get rid of both? I’d love to hear your thoughts on this.

Cafe?
How shocking that Sami kept her cool when confronted with Rafe and Carrie’s plan to become partners at work. Is it her guilt that keeps her quiet or is she trying to keep the peace? By now, we all know that something is supposed to happen between Carrie and Rafe, but Rafe just doesn’t seem interested in Carrie to me. Maybe the ex-FBI agent is better at being clandestine than her. Rafe is Carrie’s type, sure, but is Carrie his type? He loves Sami so much and they’ve no real huge issues…that he knows of. Why would he risk a good thing?

Marlena’s explanation.
Marlena’s understanding and explanation of Sami turning to EJ physically was spot on but Will’s anger at his mother and his inexperience, in addition to Sami’s history, won’t allow for empathy right now. It was surprising that Marlena didn’t admonish Will for calling Sami a slut numerous times but maybe she didn't want to deter him from opening up.

Bo and Hope had their heads shrunk.
It’s good that Bope is finally getting therapy for their past issues. Some fans say they bet the couple could have talked things out on their own but Bo and Hope have always had communication issues and sometimes having an impartial observer listening can help one feel stronger about opening up. Could Billie’s return test Bo and Hope’s new found strength?

Ab, Gab and Chad.
I don’t remember Gabi and Chad dating. If they aren’t memorable, then there’s no reason to go there again. Gabi should set her sights elsewhere and remember that her friend just ended a relationship with him.

Abby’s reaction to seeing her ex of five minutes in a compromising position with her best friend was reasonable. I think she misunderstood Austin when he lent an ear and may wonder if he reciprocates her feelings. I think she’s going to get hurt. Melanie’s being a good friend by keeping her distance from Chad, in spite of how good she and Chad seem together. If it’s supposed to happen, it will and her friendship is more important than a potential beau. Poor unlucky in love Melanie. Pimp Quinn is into her but nobody wants to see that, do they? Vote your thoughts on a possible Quinn and Melanie pairing.

"Intensity Spa" is intense alright.
Why is Quinn giving martial arts lessons in the lobby of the spa? Shouldn’t the spa and the martial arts be kept separate and the martial arts far away from the lobby? When we walk into a spa, we want the slippers, the soft new age tunes and peace. Poor Chad. Melanie really gave it to him. Since Chad refuses to be a part of his own family, can we keep Tilly as Madeline’s mother? Can’t she be his Gammy?

Daniel.
Intention tremors? Daniel had a stroke? Surprising and a bit anti-climactic but Daniel defines himself by his job, so it’ll be interesting to see what he does with this diagnosis.

Beth’s back at it, clowning around in the soap opera screen capture section.

Matt has a special blog today. Check out the blog this week for SOF's Matt's DOOL Musings.