Days of our Lives Most Memorable Storylines Of 2011. (Videos Included.)

Coming out.
Will lost his virginity and, subsequently, his girlfriend because he wouldn't go back for more. Although his coming out as a gay character was announced nearly a year ago, it's happened incredibly slowly. Sonny Kiriakis came out months ago and all his mother could do was blame the cowboy curtains she used to hang in his room. Even before them, however, the show had villainous Warden Jane and henchlady Lee, who were slowly stealing everyone's organs. If they hadn't taken out Jenn's heart, we never would have had the Daniel, Jack and Jenn triangle of romantic misery. Surprisingly, the real romantic highlight of the year was the union of Maggie and Victor, and Kate and Stefano.

Hungry?
It was also a year when dialogue centered around food more than ever before. Whether this was some hint from the dialogue writers about how they're being starved or not, we may never know. But here's a sample in case you need to jog your memory.

Don't miss Soaps.com's Soap Opera Star Holiday Interviews. Join us on Twitter @soapoperafan and Facebook. Come tweet and Facebook with us about "Days of our Lives," all the other soap operas, "Dirty Soap," "Glee," "Grey’s Anatomy," "Vampire Diaries," and "Venice The Series!" 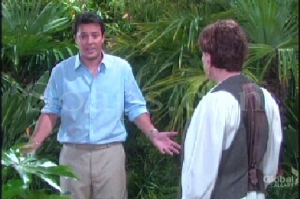 The ups and downs.

There were a lot of shake-ups on-screen and off at “DOOL” this year. The show launched a much hyped revamp, it got some flashy new sets and brought back a load of veteran players. It also got a new team of writers and producers once the much maligned reign of Head Writer Dena Higley came to an end. In spite of the big changes, it was also a year of ‘everything old is new again’. Here are just a few highlights of what happened over the past year.

RoboRafe.
Attempting to channel the kind of story that James E. Reilly used to tell, “DOOL” had another doppelganger plot this year. After Rafe’s car accident, Stefano kidnapped him and held him in a cell in the basement of the DiMera mansion before sending him to a mental institution. He replaced him with goofy, humorous look-alike, Arnold, AKA “RoboRafe,” who took over his life. It didn’t go over well with all of the fans, but it proved that Galen Gering (Rafe/RoboRafe) is actually a gifted comic actor when he has the chance.

You better watch out.
Police incompetence reaches new highs every year in Salem and this year was no exception. By the end of the year, the cops weren’t investigating actual crimes much, that was left to ex-cop Rafe and the helpful hints from criminals like Stefano or Quinn and his underworld pals. Bo and Hope ditched work at SPD in order to discover what Alice Horton did while her doughnut dough was rising. They discovered Alice was big into keeping secrets, starting with her knowledge that Daniel Jonas was Maggie Horton’s biological son but that was only the beginning of the rewrites for one of the show’s most beloved bygone characters.

We’ve been here before.
Although a lot of us complain about how repetitive and slow the stories are, the most popular plots in Soaps.com’s poll turned out to be the ones that have been going on and on for years. Bope reunited following Hope’s psychotic breakdown and leading into Carly’s slide into drug addled delirium. The only major change he underwent, aside from getting back an old bedmate and a fresh mattress, concerned his facial hair. Meanwhile, EJ and Sami continued to repeat their history. He even repeated his history with Nicole. And if that wasn’t enough, he played out a virtual parody of the EJami romance with Taylor. Almost no one liked that story though, even if it did involve James Scott (EJ) taking off his shirt and romantically fondling all the scarves he could handle.

Taking off.
We also lost a few characters this year. Viv was a major presence for most of the year, though there’s scarcely been a mention of her for months. Although her long-lost son Quinn has stuck around, she and her manservant Gus have both left. Viv’s other ‘son’ Philip also departed, as did his former flame Stephanie, her former flame Nathan and the former flame of many – Chloe. In the least popular story of the year, the opera diva became a prostitute when there was no other available work in town. We also lost Dario and Carly.

Days of our Lives Spoiler Video: Confused About Everything 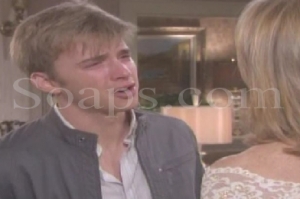