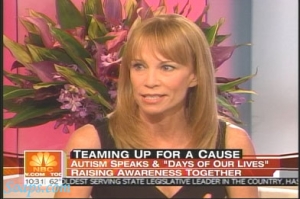 With so many changes occurring on Days of Our Lives over the past year, it shouldn’t come as a surprise to hear more people might be leaving the show. One such person who has been heavily rumored online to be leaving (amidst a reported dispute with executive producer Ed Scott) is head writer Dena Higley. In an effort to keep you on top of the situation, we spoke to our sources at the NBC soap, but they gave us no comment on issue. As for the scribe herself, she has stated on her blog that things on set are “business as usual.”

Higley seems to be somewhat of a controversial figure, as while she has earned several Daytime Emmy Nominations for writing during her tenure in soaps, she has also come under fire from several actors for her choice of storylines. Coming to the NBC soap after being let go from One Life to Live in 2007, where she was the head writer for several years, Higley previously worked as an associate head writer, scriptwriter and co-head writer for Days from 1985 – 2003.

Most recently, Higley has taken a chapter from her own life and put it on the small screen when it was revealed that Abe and Lexi’s son Theo is Autistic, a disorder the scribe’s son lives with in real life. To learn more about this read our article in the Soaps.com News Room.

It would seem things at Days will remain the same for the time being, but you can be sure Soaps.com will keep you posted on the situation should anything change.

These are the Days of Christine's...