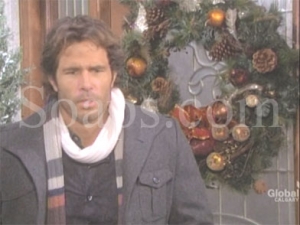 Should Sami work with Kate? (Soaps.com)

It’s a short week for me, but there’s always something to dish on so let’s get started. After the dishing, you’ll find a little holiday treat.

Sheltered psychiatrist.
Marlena’s pretty sheltered especially for a psychiatrist. Bo let her know the prison John will be transferred to is the worst in their area and once John’s inside, they can’t protect him. She was shocked as if she hadn’t thought of that. Maybe she thought he was going away, like how tweens go away to university. Maybe she’s so used to the Brady family ignoring the law, even the cops, that she expected John to be pampered.

Marlena was kind to offer Rafe to move Will in with her and it would likely do a world of good for both Marlena and Will, but why rock the boat with Sami when Will can either stay home and work on his issues, or go to Caroline’s? Shouldn’t she be encouraging them to get counselling? My only guess is that she knows Will is gay and wants to help him explore his feelings herself.

Shaking hands.
Daniel doesn’t have MG. Could it be the early onset of Parkinson’s disease? Is he going to visit Chloe while he’s away for Christmas? I remember she’s supposed to return briefly in 2012.

A faucet?
Matt and I wondered what the devil Bo was writing while Stefano was telling Hope that cryptic message about not being able to "turn it on and off like a faucet." It turns out he was writing down Stefano’s words. Now we have learned that the internet is like a faucet. Okay.

Kate and Sami.
I want Sami to work at CW with Kate because their snarkiness can be fun to watch and reminds me of the past. It feels like they’re phasing MadWorld out anyway and Kate looks like she has won. With Sami and Kate against Madison, I’m afraid Madison doesn’t stand a chance.

Fans are wondering about Sami's money situation. Doesn’t Sami get child support from Ali's dad Lucas and rich EJ? And they still can’t make ends meet. So Rafe, instead of finding work, pals around with Carrie, trying to get John out of jail. That's honourable but shouldn’t Sami be laying down the law? Wouldn't you?

With Rafe and Carrie seemingly getting closer, will romance spark? If so, does this leave Sami open for Lucas or EJ? If Carrie is already feeling some attraction toward Rafe, which seems obvious, shouldn’t she be looking for ways to get away from him and preserve her marriage? Maybe she doesn't even recognize that's what she's feeling yet.

EJ’s parents.
I really want Stefano and Susan to be EJ’s parents. I want him to stay a DiMera. The last two shows had me wondering if John and Gina (Hope) are EJ’s parents. Or Stefano and Gina. Is this even possible? I think the timeline might be off, but why else would Stefano bring up Hope’s past as Gina with John? What do you think? Vote for who EJ's parents are.

Worst dialogue of the year.

Stefano tells Lexi, "If that was an x-ray of my chest, the only thing you would see is a broken heart."

Lexi retorts, "You know what I'd find if I took you down to imaging right now? Not a broken heart. I'd find what's always been there. A heart locked nice and tight, filled with nothing but secrets and lies."

Heart locked nice and... secrets and lies? I'm so embarrassed.

Happy holidays and all the best in 2012.
Christmas in Salem has been a heart-warming time, full of nostalgia and love. Sometimes of course, there was even murder and intrigue. It is Salem, after all! With that in mind, let's take a walk down memory lane together and start out by enjoying the first Christmas in Salem, circa 1965...

December 23, 1971 marked the first day the Horton ornaments were introduced.

In this episode, Addie had been opening boxes of ornaments when she found the Horton ornaments Grandma Horton made for everyone, before she passed on. The family gathered around the box, gazing at the ornaments for the family. Each ornament had a name: Tom, Alice, Mickey, Tommy, Addie, Bill and Marie. Marie, Addie, Tom and Alice reminisced. Addie remembered Grandma H always saying, "Pretty is as pretty does," and Alice remembered Grandma creating the ornaments even when her eyesight was failing.

Fast forward a few years and we saw many Christmases, some not so ideal. John and Marlena, for example had some issues during the holidays. You know, the usual, such as Marlena being possessed during Christmas, and John being sentenced to prison for murder. This year, I’m positive we’ll see a miracle that will have John back with his loved ones.

Who remembers Bo and Hope spending their very first Christmas kissing underneath a used mistletoe Hope snagged from the hospital? Better than what happened in 2006, when the couple was estranged, and Hope was pregnant, kidnapped and trying to make her way back to Bo.

One Christmas, Roman accidentally shot Brady, leaving him paralyzed from the waist down, but it was a Christmas miracle when Belle and Brady realized one Christmas that Brady could walk.

There are a lot more memories to remember. Care to share your own fond and not so fond memories of Salem’s past Christmases?

Find out what some of the Salem actors had to say about their holiday plans through our Soap Opera Holiday Interview.

Take a look at Beth’s wisecracks in the soap opera screen capture section.

Make sure you read SOF's Matt's DOOL Musings. Here's a sampling: "In a desperate plan to hide any hint that she had committed adultery, Sami donned a scarlet dress and ordered him to recommit to her. Although Will went into emo overdrive and dragged Marlena along to the ceremony, and although Will dropped all sorts of hints to his mom that he knew about her dirty laundry and the even dirtier stains she'd left on the DiMera couch, she still didn't get it."

‘Stranger Things’ Season 4 Is ‘Coming Soon’ and Will Be ‘Bigger Than Ever,’ Promises Shawn Levy