Screw judicial process.
Roman allowed Yogi Bear to bring Boo boo a picnic basket, sans file, and since Jarlena couldn’t get their lips through the bars, they improvised swapping spit by lavishly licking cheap canned whipped cream from the strawberries and sharing them. Didn’t we see this episode a few weeks ago? Why are all scenes between John and Marlena done with the same script? And I bet if a DiMera was in jail, Roman would never let this happen.

I love it. It’s all about Abby.
When Jenn shares her break-up woes with her daughter, Abby gives the required quick "sorry to hear" speech and then confesses her feelings for another guy. She claims she doesn’t want to discuss it because she isn’t planning on telling Chad, but in the same breath, states she can’t even breathe while her crush is around her and asks what she should do! Um how about staying away from Austin and focusing on Chad? Otherwise, she’s betraying Chad by hanging on Austin. She asked Melanie why she seemed so distant – I’m sure Melanie was going, "Girl are you for real?" And instead of waiting for a reply, Abby assumes Mel’s thinking of being kidnapped. And then, because who cares about what your best friend thinks, she launches into her own story about not being sure what to do about her situation. It sure is becoming clear who matters to Abby the most.

Interesting way of writing in order to get Chabby fans on Chelanie’s side.

Babysitter.
Since jobless Rafe prefers taking care of the kids by getting them a babysitter so he can play footsies with his wife’s sister, Caroline’s got nothing to do. Kayla heard this through the grapevine and jumped on the next flight to Salem in order to pawn little Joey off on her mother. We wouldn’t want Caroline to have a break or anything. And Kayla wouldn’t be Kayla if she didn’t return to town to get into everyone’s business. Already, she gave Sami and Austin a dirty look when they left the pub together. I’ve doubts Sami can guard her secret if Kayla’s sticking around for any length of time.

What’ll Steve do for Christmas?

Wardrobe speaks volumes.
In order to recapture her lost youth, Kate’s blue streak is getting thicker and her wardrobe more outrageous, while Carrie’s galloping toward menopause by wearing little old lady reindeer blouses and Hope, not one to be outdone, has pulled out the flashy maiden-aunt Christmas sweaters. At least John’s prison wear was wrinkled. Nice touch.

Two jobs.
Melanie will be giving Botox treatments to Salemites in order to afford to move out on her own. She’ll be living in the lap of luxury with the lovely and well preserved Marlena and Kate as clients alone.

Last thought:
So who is behind the website hacking scheme? We still don't know.

Here’s a taste of SOF's Matt's DOOL Musings: "Perhaps that's why the Abster can see past Austin's Gargamel exterior, to the fact that his weathered face looks like it has spent a few decades in a smoky brothel engaging in every variety of sexual lingus and lingo imaginable." 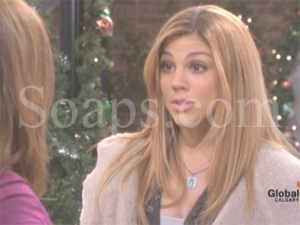 Few themes this week: Abe went behind Lexi’s back and Nic went behind EJ’s, and it was date night for a few couples. Strangest line of the week goes to Marlena: “I miss you like I miss air.” John didn’t even raise that one eyebrow. The crime rate was down in Salem this week as people hung personalized ornaments they pulled out of nowhere on the town square tree without incident.

A man cannot live on work alone.
Can we give EJ and Nicole other characters to interact with? Sure, they’re in a honeymoon phase which is sweet but all the Brady’s have friends and family, Austin and Daniel have now bonded, and these two seem lost on their own island. It’s really an injustice to the show not to utilize Nicole more. She has chemistry with everyone in Salem and can kick up the humour. And just because Maggie and Victor are married off, doesn’t mean we should never see them.

“I’m not going to be bachelor number two.”
Poor Daniel really is the better man. And you know I think Jack’s great. Dan and Jenn are well-suited for one another. There’s no denying that even if you’re a die-hard Jack and Jenn fan. Such heart-ache and my poor dear Jack isn’t helping any by jumping for joy after hearing Jenn disclose that she and Daniel were no longer together. There’s still no end in sight for these three or is there?

Billie’s return.
Is Billie returning to cause strife for Hope and Bo or will she be paired up with Dr. Dan? Does Billie know that Dan dated her mother, dumped Kate for her daughter, dumped Chelsea for her sister-in-law, and then lastly, dumped Chloe for her brother’s half-sister Jenn? Good to meet ya!

Myasthenia Gravis.
Daniel’s hands are shaking. Did he inherit MG or does he just drink too much coffee? At least if he has it, he could cure it, right?

Emotionally damaged or a big fat liar?
Brady’s too easy. Madison gave him a lame-assed explanation as to why she’s living Katy Perry’s “Hot N Cold” song and he was putty in her hands. Not in mine. Perhaps if there was a real explanation? Do these two numbskulls really figure jumping into bed will somehow uncomplicated things? How is one supposed to get behind a couple when they can’t get behind themselves? And I’m not one to minimize but in this case it’s difficult not to. Madison’s childhood woes are nothing close to what most people I know have had to deal with in their lives. It’s hard to feel anything for her just because she had no Christmas tree as a child. Christmas is about being with the ones you love, not Christmas trees, and it seems to me she had the love of her mother and siblings. Perhaps if she was stuck in the hospital with Leukemia when she was young it’d be easier to feel pity. Based on how freaky she gets about wanting to be in control of MadWorld and how she’s got one lousy sob story after another, it seems to me she’s distracting Brady in order to get control of Titan or something. Am I on to something? Vote on what’s going on with Madison.