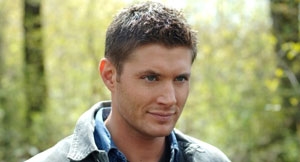 The character of Eric Brady was recently mentioned onscreen when Marlena went to visit him after he got in a car accident, but that doesn’t mean his most recent portrayer, Jensen Ackles will be returning to Days of Our Lives any time soon. With a successful television career already underway, Ackles has also just been cast in the remake of the 1981 horror flick, “My Bloody Valentine.”

Also starring Jaime King (“Sin City,” “Pearl Harbor”) and Kerr Smith (“Dawson’s Creek,” “Charmed”), “My Bloody Valentine” will be in 3-D and is set to be released in January 2009. Ackles will star as Tom, who ten years prior inadvertently caused a coal mining accident that killed five people and sent the only survivor, Harry, into a coma. Upon waking from his coma one year later on Valentine’s Day, Harry went on a rampage killing twenty-two people in the process. A decade later, Tom returns to his hometown to lay his guilt to rest over the past, but finds himself facing a killer in a miner’s mask with a pickaxe instead.

Last seen in Salem in 2000, Eric is the son of Marlena and Roman and twin sister to Sami. He had become a photographer for Countess Wilhelmina where he met and fell in love with Nicole. Of course that didn’t last and when Nicole got involved with Lucas, Eric turned his attentions toward Greta Von Amberg. However, he still loved Nicole and they began seeing each other again behind Lucas’s back. Soon after, Eric survived a near-fatal accident and then decided to leave Salem.

After leaving Days, Jensen enjoyed lengthy guest stints on “Dark Angel,” “Dawson’s Creek and “Smallville” before landing a starring role as Dean, one of two brothers who battle paranormal events in the series “Supernatural.”

Soaps.com would like to congratulate Jensen on all his post Days of Our Lives roles and wish him continued success on both the big and small screens!

Linden Ashby Back to Days of our...